In the absence of any major diplomatic fiascos or triumphs, wars or terror attacks, here is a roundup of a regular old week in Israel:

Right-leaning Kadima MK Israel Hasson  has proposed that Israelis should not be allowed to perform their national service (an alternate form of IDF service for those with a special exemption) at human rights organizations.

The idea is that national service should not include organizations like the Association for Civil Rights in Israel, Physicians for Human Rights, and others because Hasson is miffed about their involvement in the Goldstone investigation. But as Haaretz explains:

Hasson is ignoring the nature of the mission that human rights organizations have taken upon themselves – namely, a constant battle to uphold the ethical, humanist values without which a democratic society cannot exist, or, at the very least, could not maintain its democratic image.

Demanding an investigation of the army is neither treason nor slander.

For civil society, the week just got worse. Yedid, the Association for Community Empowerment,  one of Israel’s most established organizations providing free legal services to underprivileged families, announced that it will be closing a number of its branches in the “periphery” – outlying areas of the country where many of its clients live.

Tens of thousands of families of low socio-economic status will no longer receive services, since they can’t necessarily afford to travel to bigger cities. The branches are being closed because the global financial crisis hurt Yedid’s foreign donations, but also because domestic and government sources have been cut too. The organization called on Israeli society to pick up the slack: “The government and the corporate sector must understand that this is not about philanthropy – it’s about deep, and genuine social investment in Israeli society, and a central means to reducing social gaps,” said Yedid in a press release.

Proper disclosure – I know the leaders of Yedid, and they are the very model citizens I wish everyone could be, including myself. They are active, committed, they have labored with love and devotion for years outside the limelight, because their work isn’t very controversial – but that doesn’t make it less important.

Next, an Internet survey conducted for the Ministry of Absorption appeared in Israel Today (Hebrew only), testing 16-25 year olds and comparing Israeli-born youngsters with young immigrants, with equal samples of each. Over one-quarter of Israeli-born young folks think that immigrants in general are a burden on the country (10%) or that Israel should stop absorbing immigrants (17%). This made me wonder if the nationalist genie that has run amok over the last two years is sowing the seeds of European-right style anti-immigration trends. If anyone thought that discriminatory legislation and rhetoric against the Arabs citizens of Israel would not eventually spill over into Jewish society too – keep your eyes on the young folks.

Finally, the week is closing with an answer to the question of whether any sort of Arab Spring could happen here. How? Who would initiate it and over what issues? Interested foreigners commonly ask me why Israelis don’t rise up and flood town squares to demand a peace agreement. Gas prices have risen to suffocating levels over the last few months (roughly $8 a gallon); people talked about protests, but nothing happened.

Then this week the price of cottage cheese, a national staple known affectionately by the Israeli-accented term “cottage,” climbed to eight shekels for a small container. This drove Israelis bonkers. My chef pal Rima Olvera thought the mounting protest so funny that she derisively posted the following photo and caption on Facebook: 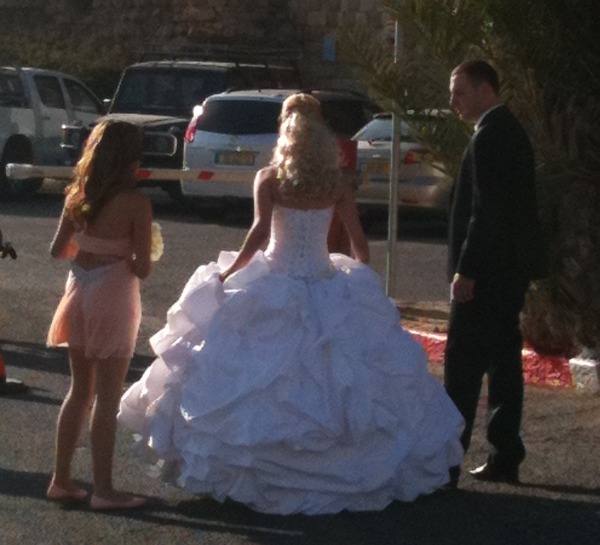 But it’s really not very funny. A Facebook group drew 60,000 members almost overnight. Snappy headlines started cropping up like “The Cottage that Curdled,” or “It’s not the Cottage, to hell with it” – riffing on “it’s the economy, stupid”. (Hebrew only – both from Ynet).

And the latter Ynet article, by Ivy Lerer, explained the real outrage behind the outrage:

You thought we were a high-tech state? Well, you were wrong: food, freedom of movement and a roof over our heads, people – that’s what interests us in 2011. Welcome to the third world. Don’t bother us with peace processes, social equality, issues of religion and state, human rights. You want to feel us up for no reason [referring to a bill that would allow police to conduct body searches with no reasonable suspicion – ds]? You want to follow us through computerized data sources, “1984”-style? Yalla, welcome [go for it -ds], we’re worn out.  Just do us a favor and lower the price of the cheese, so we can feel good about ourselves.”

So next time I ask Israelis in a survey what they care about, perhaps I should add the option, along with education, security, jobs, peace – “cottage cheese.” Let it be a symbol for the hopelessness and despair that many citizens apparently feel about the public sphere and their inability to change it or unwillingness to try. Personally I hope they lower the cost of cottage cheese swiftly – so we can get back to those huge and towering issues that desperately need to be solved.