On this Holocaust Memorial Day, I’d like to seize the opportunity and honor the memory of my teacher, Auschwitz survivor Rabbi Ben-Zion Gold, by remembering an important lesson: A universal vision is an essential part of Jewish particularism. 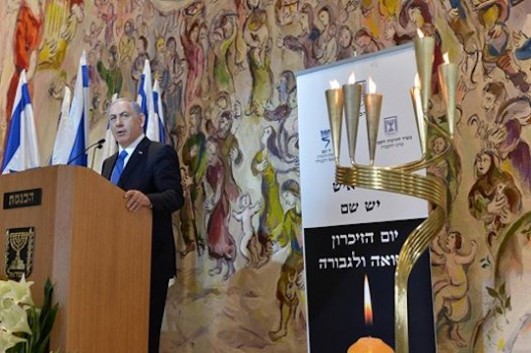 A day before Holocaust Remembrance Day, which is observed in Israel starting Wednesday evening, Israeli author and media personality Irit Linor published a rant on Facebook (Hebrew), apparently with Holocaust and Heroism Day (as it is known in Hebrew) on her mind. She wrote that she is completely particularistic and that she doesn’t have “any truck with universalistic values, because they say nothing to me.” She rejected any attempt to derive universal lessons from the Holocaust because, she stated, the Nazis hated Jews, not “the other” in general.

I agree that some abuse the Holocaust for their own ends, from those who accuse Israel of perpetrating a Holocaust against the Palestinians to those Israelis who exploit the Holocaust to perpetuate a worldview in which any criticism of Israel is an attempt to complete what the Nazis started. But the fact is that I will light seven memorial candles this evening, not just the usual six, in order to remember the million “others” who were murdered by the Nazis, along with six million Jews. My response to Linor is also an opportunity to honor the memory of my rabbi and teacher at Harvard Hillel, Ben-Zion Gold, z”l, a survivor of Auschwitz who died on April 16th.

When Irit Linor writes that “I don’t have any truck with universal values because they don’t say anything to me,” she is saying that that Jewish particularlism doesn’t speak to her either. That’s because a universal vision is an essential part of Jewish particularism. As careful as we must be about claiming “Judaism says,” Judaism clearly contains a balance (and yes, sometimes tension) between “universal values” and “particularism.” Isaiah and Micah’s prophesies about the end of days display this balance:

“1. But in the end of days it shall come to pass, that the mountain of the Adonai’s house shall be established as the top of the mountains, and it shall be exalted above the hills; and peoples shall flow unto it. 2. And many nations shall go and say: ‘Come, let us go up to the mountain of Adonai, and to the house of the God of Jacob; and God will teach us of God’s ways, and we will walk in God’s paths’; for Torah shall go forth from Zion, and the word of Adonai from Jerusalem. 3. And God shall judge between many peoples, and shall decide concerning mighty nations afar off; and they shall beat their swords into plowshares, and their spears into pruninghooks; nation shall not lift up sword against nation, neither shall they learn war any more. 4. But every person shall sit under his/her vine and under his/her fig-tree; and none shall make them afraid; for the mouth of Adonai of hosts has spoken. 5. For, all the peoples walk each one in the name of its god, but we will walk in the name of Adonai our God for ever and ever. (Michah 4: 1-5)”

In ancient times, on the holiday of Sukkot, Jews offered sacrifices for rain at the temple in Jerusalem on behalf of all the 70 nations that we traditionally said existed at that time. Abraham fights for any righteous non-Jews who might exist in Sodom and Gemorah. Maimonides rules that we must provide for non-Jews living in poverty along with Jews… The root of the Hebrew word for peace, “shalom,” has the same root as “shalem,” meaning wholeness. The peace we dream of entails wholeness between all of God’s creatures, and also the world itself.

When Linor mentions Harvard University. she gives me the opportunity to honor the memory of my rabbi and teacher, the Harvard Hillel director and Holocaust survivor Rabbi Ben-Zion Gold, who died on April 16th. I remember how he fought latent cultural anti-Semitism at Harvard, particularly his angry sermon reprinted in the Harvard Crimson when the festive first year registration was scheduled on Yom Kippur. I also remember the words he spoke at a rally calling for Harvard to divest itself of its holdings in corporations doing business in South Africa:

This derivation of both particularistic and universal lessons from the Holocaust is precisely what Elie Wiesel emphasized when receiving the Nobel Peace Prize. When Menachem Begin, Israel’s ultra-particularistic prime minister, took office in 1977, one of his first acts was to take in Vietnamese boat people. He said, “The Jewish people, who has known persecution, and perhaps knows the meaning of the word ‘refugee’ more than any other people, cannot (stand by and) watch the suffering of these poor people.”

This is the universalism embedded within our particularism.

To deny the existence of Jewish universalism is to deny both our religion and our history.

Rabbi Arik Ascherman is the President of Rabbis for Human Rights.