One Palestinian journalist’s meditation on being forced to pay for Haaretz, the only paper he can rely on, but one that also espouses a nationalist ideology he cannot accept. ‘I’m fated to be a reluctant reader — and a reluctant citizen.’ 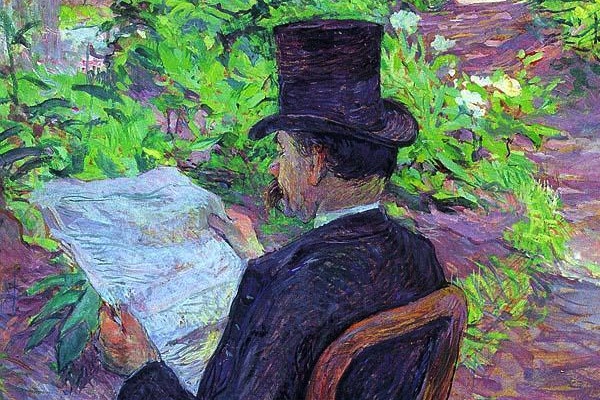 It’s morning and I desperately need the news. Where I live, one needs to know what awful things to expect outdoors before leaving the house. I often think of those people who have a favorite newspaper of choice. They develop an easy kinship to the paper: “Have you seen my newspaper?”, they ask around the house; “I’m here, just reading my newspaper”, they shout from the garden. They meet their favorite paper every morning expecting it to inform, enlighten and at times amuse them. True, they might be critical of some writers, alert to some trends, but in general they trust their paper. If it is a serious relationship, they subscribe. That way, mornings are never completely bleak and coffee is never lonely. And isn’t that nice? How I envy them, those people who look forward to leafing through the Sunday paper or casually entering their favorite news website during the day, just to check what’s happening.

It’s morning, and I need a source to rely on. Without much thought, I type my way into the Israeli Haartez news website. Yes, I’m a Palestinian, but I live in Israel and I need to know the inner workings of the political and social structures here. Nevertheless, the task of jigsawing a fundamental — however relative — truth falls solely on my shoulders. How can I possibly trust the Israeli news? But then again, how can I do without them? Relying only on the local Arab press, poor, bitter and disenfranchised, is below the needs of my disposition. You cannot fully perform the role of the victim while living in the belly of the beast. So, it is morning and I enter the Haaretz website, “The paper for thinking people,” as its slogan reads. But what has long become a default choice, a habitual and involuntary tapping of my fingers on the keyboard, is now blocked by an unequivocal demand for commitment. Just like its role model, The New York Times, Haaretz decided to charge money for a subscription to its website. A dilemma now hovers above this helplessly passive pattern of consumption.

I scroll to see a special column written by Haaretz publisher Amos Schocken defending the restriction of free access to the website and advocating the subscription model to readers. Schocken claims that buying a subscription “is beyond a commercial contract. It’s also an important investment in the future of quality journalism in Israel; independent journalism that puts the public’s interest first, and in the case of Haaretz advances social, cultural and democratic values and protects them as much as it can.” Beyond the mere consumerist choice of subscribing or not (the price is not unfair), more substantial questions arose as I entirely re-examinated my relationship with this newspaper; I am, admittedly, a devout reader — whether a pleased one or not.

A word on Mr. Schocken is necessary before examining his bombastic praises of his own publication’s journalistic merits. Mr Schocken, the grandson of Haaretz founder Salman Schocken, oftentimes prides himself as being the patron of the free independent press in Israel. In an interview to The New Yorker, he once described it as “a cross I have to bear.” But Schocken, a reticent gentleman of European origin, is a business mogul in local terms with much cash and influence. In recent years, the Haaretz Group has been a profitable business by all indications. Schocken and family own a business conglomerate with a lucrative portfolio comprising Haaretz (the third biggest newspaper in Israel), a vast network of local tabloids, several websites, a magazine, a successful printing press, a publishing house, a slew of real estate assets and a mammoth art collection.

It is not beside the point that a shrewd businessman as he is, Schocken never lets righteousness stand in the way of a good deal. In 2011, Schocken Groups sold 20 percent of Haaretz’s shares to Russian billionaire Leonid Nevzlin for NIS 140 million. Nevzlin is wanted for extradition by the Kremlin for allegations of fraudulent abuse of Russia’s oil resources. Like several other Russian oligarchs who fled to Israel to avoid justice in Russia, he seeks legitimacy through lavish philanthropic donations and by discreetly forging close ties with politicians. Interfering in the newspaper’s content was never Nevzlin’s intention. His investment in Haaretz was designed to clear his dubious public image. Haaretz took the cash and made him Kosher.

Earlier in 2006, the Haaretz Group sold 25 percent of its shares to German publisher M. DuMont Schauberg, grandson of the founder of Cologne-based publishing company Kurt Neven Dument, with an estimated value of 25 million euros, reflecting a 100 million euro valuation of the Haaretz Group. Dument’s father was a member of the Nazi party in the Third Reich. His major publication, the Koelner Zeitung, was at best complacent with the Nazi regime’s propaganda. It may all be legitimate, but it does cast a chilling shadow over Schocken’s unobstructed moralism.

I might not be the target audience for Mr Schocken’s appeal: suggestively liberal Zionist, concerned about Israel’s future and anxious about its propensity to self-destruct. That constituency seems to be dwindling itself, judging by the general mood in Israel and the results of the past few elections. The shift of public opinion is vividly engraved in my memory.

I was a student in the Hebrew University in Jerusalem when the second Intifada (aka the Al-Aqsa Intifada) burst in flames. I remember the suicide bus bombings in my vicinity, the painful capital punishments on the other side, the fear, the tension and being occasionally stopped by the police just for being a ‘usual suspect.’ I should mention that in those days I was a proud Haaretz subscriber. Those awful bloody years between 2000-2005 shifted the entire political scale in Israel to the right. While Haaretz remains a relative refuge from its belligerent center-right alternatives, it too can fall silent when the guns roar. Such was the case during the second Intifada, the Second Lebanon War and the wars against Gaza. Haaretz is in its essence a liberal Zionist publication, profoundly conservative in many ways.

Like all media outlets in Israel, the paper is subject to a government and security-apparatus censorship on security issues, fortified by self-censorship. And although it is not as nationalistic as in its counterparts, the language Haaretz uses consistently fails to be unbiased. One stark example is the almost exclusive use of the passive voice in headlines, defying common editorial rules when reporting the killing of Palestinians (e.g. “A Palestinian killed by IDF bullets” versus when an Israeli is killed, “A Palestinian murdered an Israeli citizen”). The psychology behind that scrubbed language is not hard to understand – the national neuroses, the hysterical use of force, the collective denial, the pride, the arrogance and the ancient wounds. I try to neutralize its desired effect. Eventually, I find myself reading the news with a twitched face until I can no longer continue reading.

If I were to summarize the editorial stance of Haaretz, I would say that it calls for the end of the Israeli occupation of the West Bank and for a two-state solution, primarily to discharge Israel from the moral hunchback of controlling more than 1.5 million Palestinians. Once the Palestinians are left to their own devices, Israel can then focus on the task of promoting an egalitarian society based on the tired notion of “respect for the other” (like in any banal children’s book, the Palestinian joins the African and Asian work immigrants in being the “other”). It’s a classic liberal thought that fails to understand its shortcomings. On that account, the newspaper maintains a token leftist column or two, a token feminist column and a token Arab writer with a weekly column. All very mainstream and mellow while xenophobic mayhem rages across the country.

And so, non-mainstream thought is rarely given a place in Haaretz. A proposed solution of a bi-national state, to mention a significant case in point, is outcast to the realms of the unthinkable. A Jewish-Arab state is presented in Haaretz only as a dystopian scenario that must be prevented with a quickly drawn two-state solution. It all corresponds with the publisher’s worldview, who when answering criticism from the Right for being “anti-Zionist,” vowed against the idea of a bi-national state or even the toned down notion of a “state of all its citizens.” Apologetic and vainglorious at the same time, he dubbed Haaretz as “Zionist through and through.” It wouldn’t be an exaggeration to claim that a truly open-minded debate would be more plausible with Jewish settlers than with the decadent mainstream left or the more hypocritical centre-left.

I’ll never be the ideal Haaretz reader as much as it can never be my ideal newspaper. Yet we’re bound in chains together in this small piece of land. If I could only switch off my mind, leave all historical contingencies aside and be a proud Israeli; then I could have the luxury of happily spreading my newspaper on the kitchen table, scattering the supplements around the house and clumsily forgetting the front page in the car. Right now, the best I could bring myself to do is to sign up for a free trial version for the undecided. Unable to take the train but unable to jump off of it, I’m fated to be a reluctant reader — and a reluctant citizen.