As Americans remember civil rights leader Martin Luther King, Jr., his messages ring true for many Israelis looking for this sort of inspiration that their own leaders are simply not providing.

There are few times in which journalists get to say “the politicians done good.”  This is one of them.

First, in the past year, the US Federal Government unveiled the long overdue national memorial honoring the slain American civil rights leader, the Reverend Dr. Martin Luther King, Jr. MLK, as he is often called, would have turned 83 years old this past weekend, had he not been gunned down before he celebrated even half of those years.  He preached that the rule of law (as defined by government) is not always right and is not always moral.  And in both cases, it must be challenged and challenged tirelessly.

His weapon was civil disobedience.  Decades later, the same capital city upon which he marched has given his memory a permanent home amidst the memorials of the country’s greatest names, including Jefferson and Lincoln, and just meters away from the national memorial honoring the fallen soldiers of the war in Vietnam which Dr. King so vocally opposed.  This inclusion of King’s legacy into the ranks of America’s most revered icons serves as a rare reminder that this country should applaud those who stand-up, as its pledge of allegiance boasts, to defend “liberty and justice for all.”

Second, an error in the engraved quote at the side of MLK’s bust, will now be corrected.  After the memorial opened, there was a great deal of controversy surrounding the truncation of an MLK quote.  The chosen text was meant to convey King’s humility but in the end actually conveyed a sense of arrogance, and many among his family and supporters were outraged. Determined to get it right, the federal government has just announced that it will fix the stone etching to better reflect King’s legacy.  Again, the message here is that not only should King be honored, but that he should be honored in a way that is fitting.  And for anyone who follows the US government, such a humble admission of error, much less a willingness to correct it, is rare.

Americans annually celebrate Dr. King’s birthday around this time of year.  The 2012 calendar calls for a bank holiday on Monday.  And because the memorial is so new, the day this year is getting lots of extra attention.  And it has once again highlighted King’s messages.  I, an Israeli-American splitting my time between both countries, went to see the memorial first-hand.  It was touching and challenging. 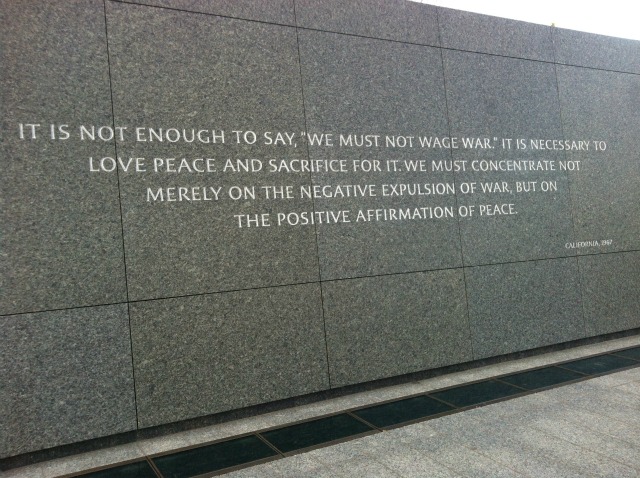 MLK: "It is not enough to say, 'We must not wage war.' It is necessary to love peace and sacrifice for it. We must concentrate not merely on the negative expulsion of war, but on the positive affirmation of peace." (photo: Roee Ruttenberg) 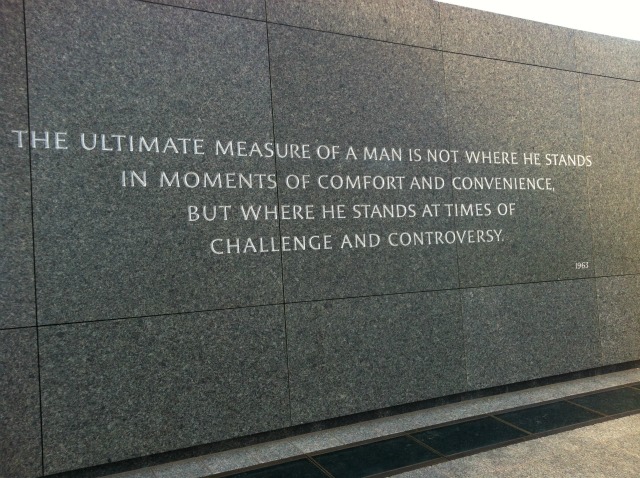 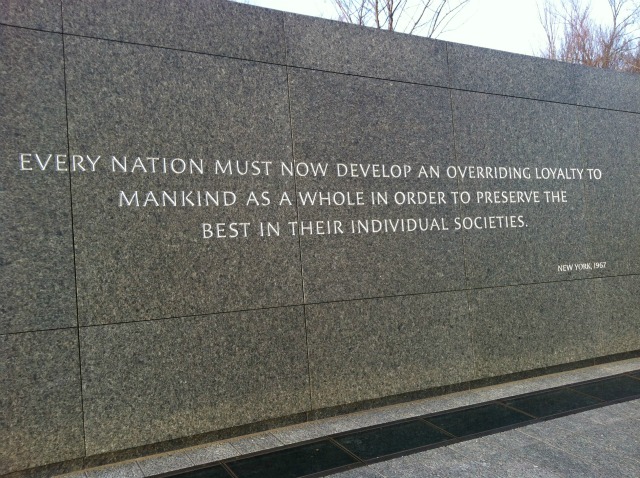 MLK: "Every nation must now develop an overriding loyalty to mankind as a whole in order to preserve the best in their individual societies." (photo: Roee Ruttenberg) 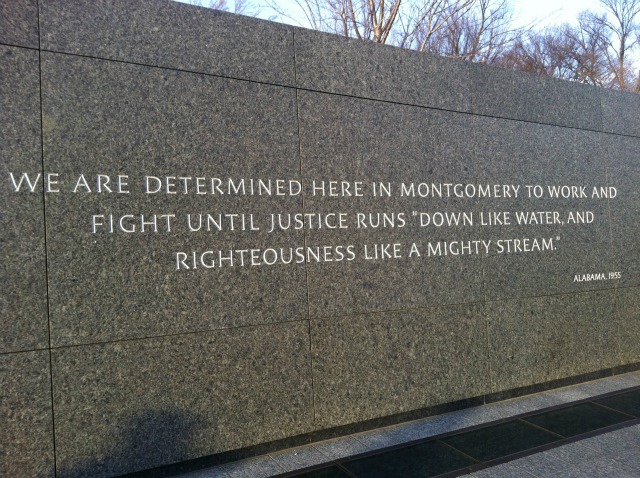 MLK: "We are determined here in Montgomery to work and fight until justice runs 'down like water, and righteousness like a mighty stream'." (photo: Roee Ruttenberg) 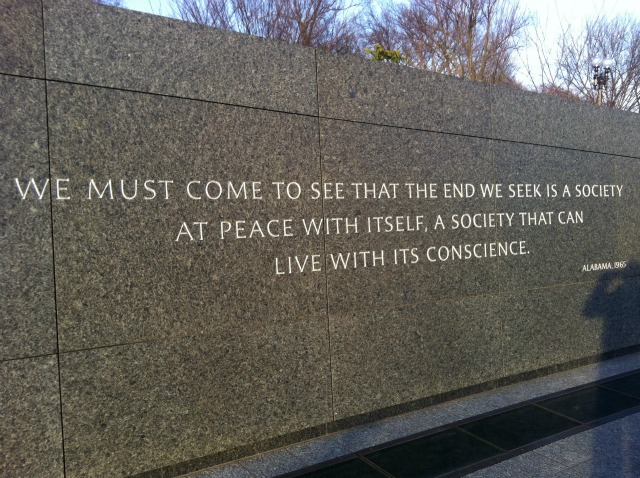 MLK: "We must come to see that the end we seek is a society at peace with itself, a society that can live with its conscience." (photo: Roee Ruttenberg) 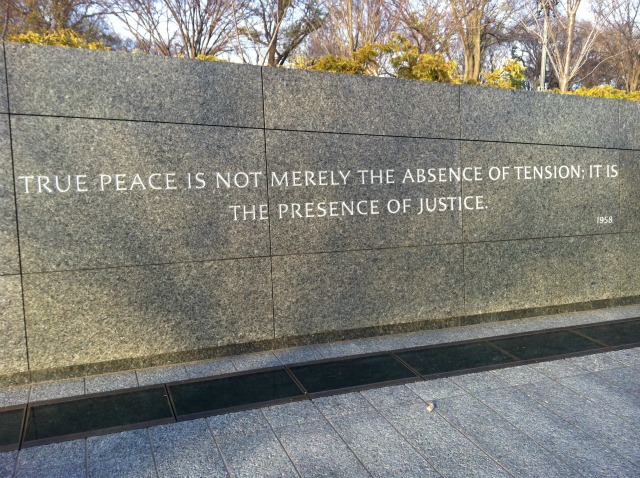 MLK: "True peace is not merely the absence of tension; it is the presence of justice." (photo: Roee Ruttenberg) 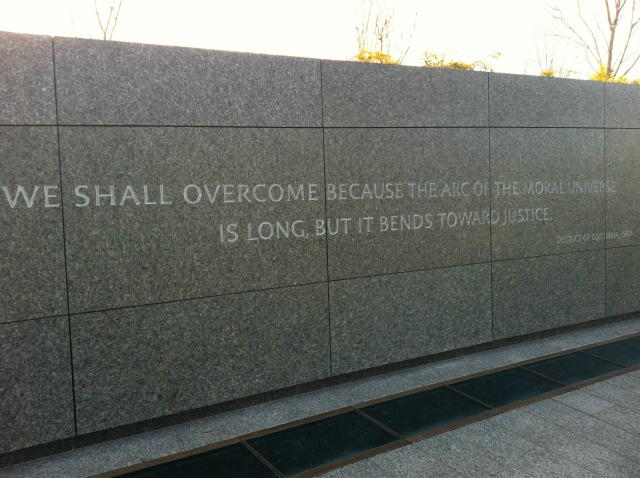 MLK: "We shall overcome because the arc of the moral universe is long, but it bends toward justice." (photo: Roee Ruttenberg) 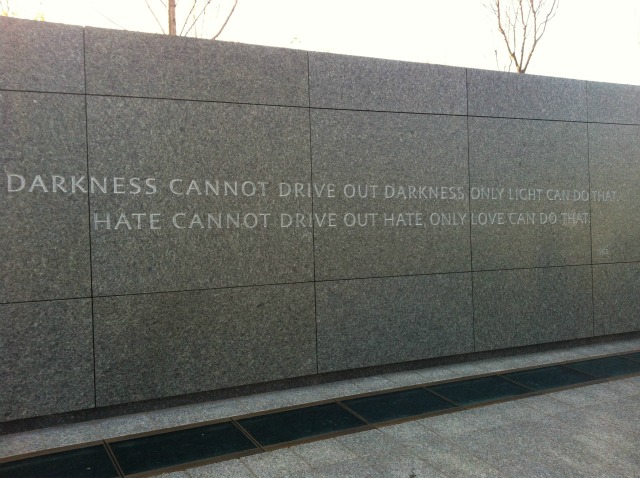 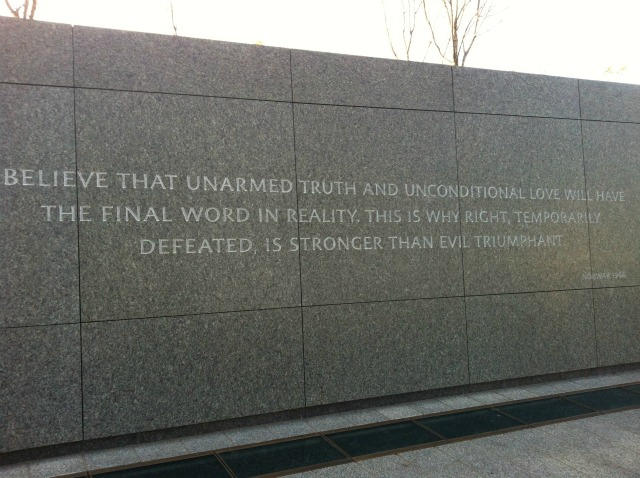 MLK: "I believe that unarmed truth and unconditional love will have the final word in reality. This is why right, temporarily defeated, is stronger than evil triumphant." (photo: Roee Ruttenberg) 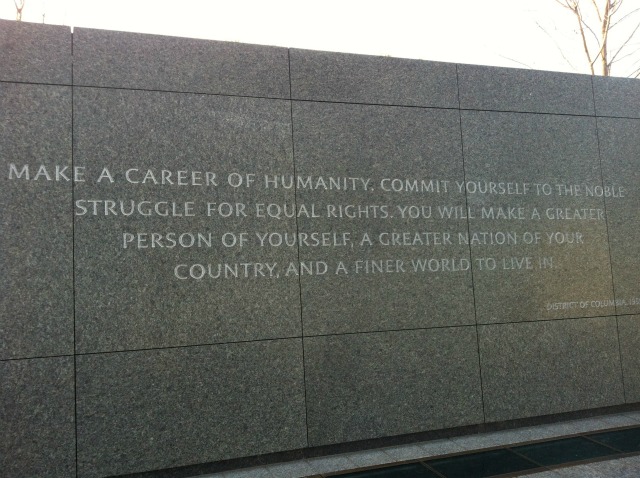 MLK: "Make a career of humanity, commit yourself to the noble struggle for equal rights. You will make a greater person of yourself, a greater nation of your country, and a finer world to live in." (photo: Roee Ruttenberg) 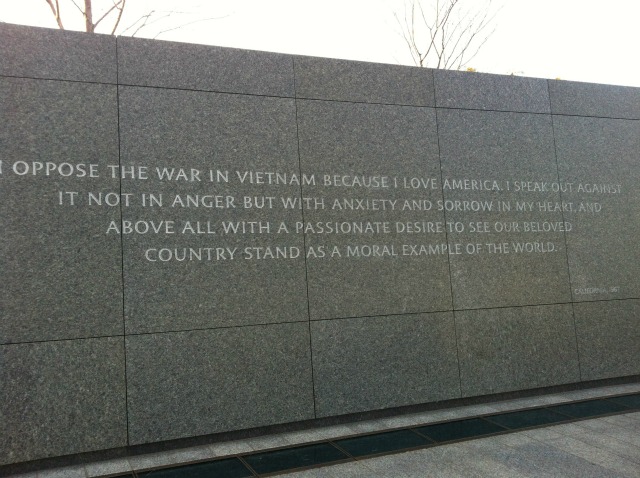 MLK: "I oppose the war in Vietnam because I love America. I speak out against it not in anger, but with anxiety and sorrow in my heart, and above all with a passionate desire to see our beloved country stand as a moral example of the world." (photo: Roee Ruttenberg) 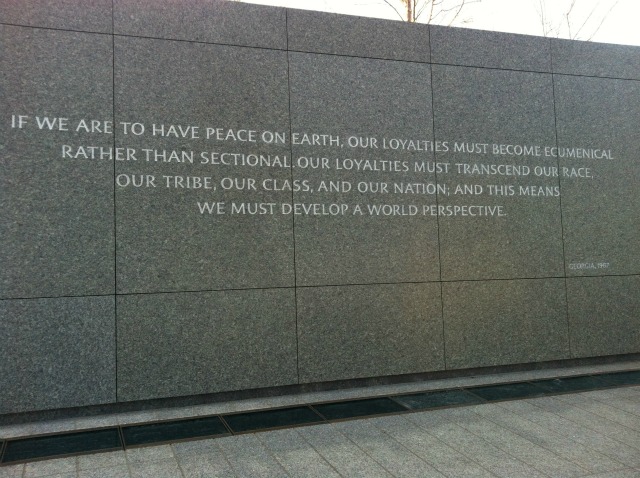 MLK: "If we are to have peace on earth, our loyalties must become ecumenical rather than sectional. Our loyalties must transcend our race, our tribe, our class, and our nation; and this means we must develop a world perspective." (photo: Roee Ruttenberg) 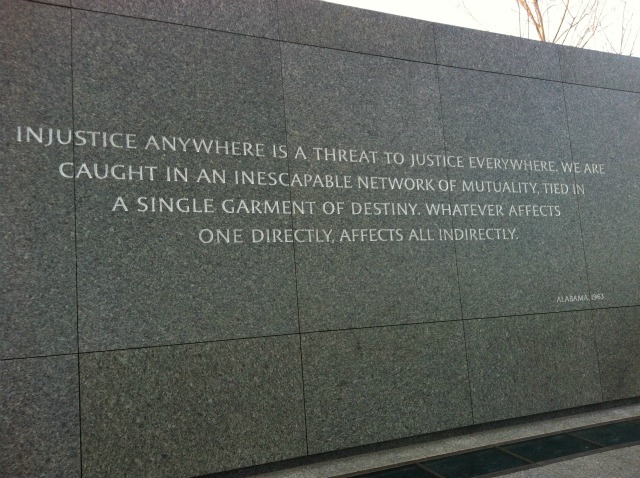 MLK: "Injustice anywhere is a threat to justice everywhere. We are caught in an inescapable network of mutuality, tied in a single garment of destiny. Whatever affects one directly, affects all indirectly." (photo: Roee Ruttenberg) 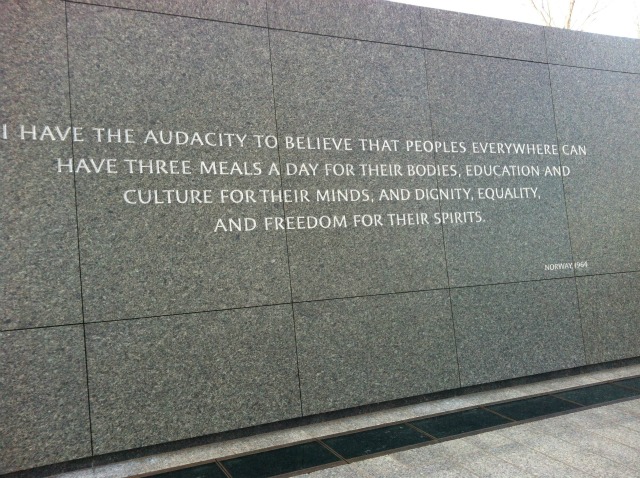 MLK: "I have the audacity to believe that peoples everywhere can have three meals a day for the their bodies, education and culture for their minds, and dignity, equality and freedom for their spirits." (photo: Roee Ruttenberg)

A few things came to mind as I walked through the memorial.  First, I immediately wondered, as the lyrics of a Hebrew song ask, “Eifoh yeshnam od anashim k’mo ha’ish hahu?  (“Where are there more people like that man?”)  This tune was sung more than fifteen years ago for the slain Prime Minister Yitzhak Rabin.  But most Israelis would find it difficult to equate Rabin to Dr. King.  So I ask, where is Israel’s MLK?  And would Israeli society and the system currently in place provide for (and maybe one day applaud) the rising-up of a man or woman who’d say that the rule of law is unjust and immoral and must be challenged with the weapon of civil disobedience?

Second, I found myself noticing that some of King’s texts, etched into the walls of the memorial, directly resonated with the situation in Israel vis-a-vis the country’s own agenda and its agenda with the Palestinians.  And some – allowing for a slight word change here and there – became rather haunting.  Here are a few that immediately popped into my head:

True peace is not merely the absence of violence; it is the presence of justice.

I oppose the occupation in Palestine because I love Israel. I speak out against it not in anger, but with anxiety and sorrow in my heart, and above all with a passionate desire to see our beloved country stand as a moral example of the world.

Injustice in Palestine is a threat to justice in Israel. We are caught in an inescapable network of mutuality, tied in a single garment of destiny. Whatever affects one directly, affects all indirectly.

I have the chutzpah to believe that Palestinians everywhere can have three meals a day for the their bodies, education and culture for their minds, and dignity, equality and freedom for their spirits.

This year, to help me honor Dr. King’s spirit and memory, I invite our readers to share their own messages… inspired by his.