A successful indie band whose radical lyrics dealt with Israeli taboos – from the Nakba to militarism – is making a comeback. 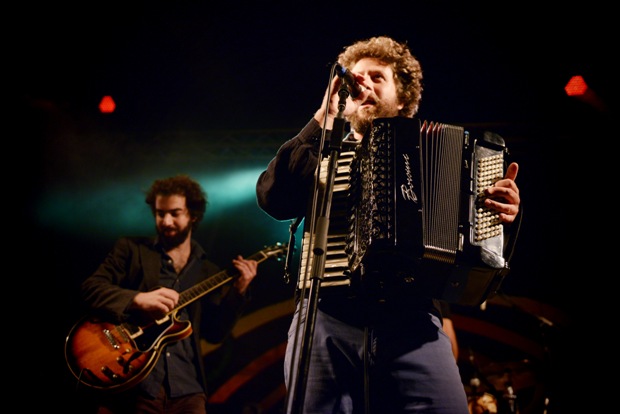 The basic rules for political engagement in Israel: Yearning for peace is welcomed, criticism of the occupation is tolerated but not really liked, and mentions of the Nakba and refugees are completely taboo. These guidelines are adhered to even in the cultural world: Army Radio will gladly play the Song for Peace, but a tune by a mainstream artist based on soldiers’ experiences in occupied Hebron might be banned, and songs about the Nakba are hardly written or performed at all. Which is what makes the work of the indie group Habiluim even more interesting.

The lyrics of Habiluim – which means, in Hebrew, “the good times” and is a play on the first Zionist immigration movement in the 19th century – consist of a dark, surreal mix of Israeli classics, political name-dropping, and references to militarism, juxtaposed with morbid notes on love and relationships, and the most troubling historical questions, including the memory of 1948, torture and modern day propaganda. At times, the references are subtle, but they are always there, unmistakable to the Israeli ear. Musical influences vary accordingly, from cabaret to rock to klezmer to the heroic tunes of the early Israeli days.

While hardly a mainstream band, Habiluim enjoyed legendary status in the indie scene, and even had some proper radio hits. Perhaps it was the surrealist element in their writing that allowed them to be deemed acceptable; perhaps it’s simply their uniqueness and the undeniable quality of their work.

The group is actually a duo – Yami Wisler and Noam Enbar – supported by a rotation of musicians and artists. Wisler and Enbar formed the band during high school, but only secured a contract with a major label in 2003. They released a couple of albums and in 2008 dissolved the band. This summer, they got together again, and are about to record a third album.

I never fully grasped how politically radical Habiluim were – maybe because their biggest radio hit was an ironic love song – until I heard “Blow Wind Blow” – a song dealing with one of the most gruesome affairs of 1948 – in a little-known film. What’s so strong about it is not the historical reference itself – which most people would probably not notice – but the description of the attempt to avoid the memory. To hide the ruins, to change the [Arab] street names, to satisfy ourselves with myths and songs. It is as though the entire debate surrounding the New Historians was summed up in a few words, then set to music.

Hold on to this: We tried very hard
We covered the ruins; we changed the names of streets
We tried, we quelled rumors
When all we hoped for was to sing with our father the “Finjan song(*)”
hold on to that!

Hold on to that: we tried very hard
We covered the ruins, changed the names of streets
We tried so hard, we cleaned up the writings
When all we hoped for was to sing with our fathers “how it spins how it spins, the finjan”
Hold on to that!

It’s true, kid, it’s true, I grabbed her from behind
I did it for security reasons
As we all went for her, one by one.
It’s true kid its true
We took her to the sands
We gave her a shovel to dig with
At the time it’s seemed like a solution!

Hold on to that: we tried very hard
We covered the ruins, changed the names of the streets
We tried hard, we silenced rumors
When all we hoped for was to sing with our fathers “how it spins how it spins, the finjan”
Hold on to that, hold on to that.

[* Finjan Song is a famous Israeli campfire song from 1948]

Perhaps their most sophisticated song is “Bab El Wad, version 38A.”

“The outline of the song is the story of the state of Israel, 2007 version: A high-tech plane diving to its end,” wrote Idan Landau in Haaretz’s literary section upon the single’s release. “‘There are many ways to describe,’ the minutes left before the bitter end, but Habiluim ‘are not here to entertain,'” he added, quoting two of the songs lines.

Most of the song is made up of Israelis clichés and catch-phrases, covering the full spectrum of celebrity name-dropping and the Holocaust, but the heart of the song is the chorus, where two Israeli classical tunes meld: A sampling of “Bab El-Wad,” the best known song from ’48, commemorating and glorifying the dead from the battle on the road to Jerusalem; and “Drive Slowly” by Arik Einstein, the hymn of a supposedly care-free, relaxed existence, which mentions both the danger of a hand grenade thrown near Gaza, or the “poor soldier” on duty.

The catch is in the line that’s lifted from Einstein: “They won’t start without us” – supposedly a desire to take life easy and not rush things, updated to express the notion that every generation has its share of horrors. There is always the army; there is always the Holocaust, a circular motion which goes nowhere.

And in case you missed the punchline, here is the clip:

Enbar: Hello. We are the Biluim. We shall now listen to our new song, Bab El Wad 38A

On the right you can see Istanbul, growing far
On the left you can see the wing, breaking off.
There are plenty of ways to describe it and there isn`t one that hasn’t been tried,
But like Papa-Smurf says –
if it`s blue and quiet, it must be crib death

Bab el Wad, Bab el Wad
They will not start without us
Bab el Wad

I am not here to entertain you,
just to ask – the fact the pilot is long missing
Is that considered a mishap?
On your right, you can see the mountains getting closer
On the left your wife pulls out the stun gun
She wants another oxygen mask
Shorter than Dooby Gal (*)
Faster than a prime-ministers term
Funnier than a sequel to “Schindler’s list”
Sadder than the pope on skates
Now Sergei is passing with the cart
In case someone wants to buy a watch for a friend
“To be or not to be,” is not the question
The question is rather: ”chicken or beef”

[*Dooby Gal: An Israeli actor, known mostly for his roles in eighties comedies]

Interestingly enough, the original performer of Bab El-Wad, Yafa Yarkoni, once a canonic singer of war tunes, saw many of her shows and events canceled in 2002, following an interview in which she expressed support for the refusal movement and harsh criticism of the occupation. Yarkoni, who passed away this year, approved of the Habiluim use of her most famous song.

More than anything, Habiluim mock the command to pretend that everything is just great over here. The closing song on their first album is all about propaganda. It is as relevant today as it was a decade ago:

In the stock market they said everyone profits
And where’re all happy and greet each other
Because we’re all brothers
All the women here are good looking
And the food is delicious
The dead sea is filled with magnificent fishes
And all the captive soldiers are still alive!

On the fifth floor of the Jewish Agency building
Sits Zelman Shoshi**, who is now a clerk
He is sipping his tea as he types.
He is sweating, cause it’s hot
Weeping, cause it’s sad
He puts on a stamp and in the name of the nation
He pleads us all to come back!
And by night, at the end of his shift he gets up
He puts out the light and goes down the ladder
He goes down to the people
But the people are gone…
He finds himself a corner, and falls asleep

Habiluim are Yami Wisler, Noam Enbar, Maya Dunitz, Yoni Silver, Shlomi Lavie, Shiko Sinai, Eyal Talmudi, Assaf Talmudi, Shahar Haziza. They will perform tomorrow [Friday, October 26] in the Barby club in Tel Aviv (the show is sold out). Another show is scheduled for November 29. The translations of lyrics that appear in this post are courtesy of the band and are copyrighted.