In spite of the headlines, the international media attention, and the flow of pictures showing celebrating Palestinians waving flags – the UN resolution sparked little excitement or joy in the streets of Ramallah, which is still surrounded by walls and settlements on all sides. If anything, it was an evening of sadness and despair.

Traveling to Ramallah for the late-night public screening of Palestine’s UN bid, I was not expecting much. Journalists who spent the day in the West Bank had already reported that very little was going on, that PA sponsored rallies had attracted only few people in the major cities in spite of the official holiday declared, and that there had been no special sense of enthusiasm in the air.

And why should there be? Aside from the fact that voting results were more or less known in advance, most people I talked to ahead of time felt that the bid would not really change anything on the ground. The Israeli government was unlikely to change anything about its behavior (not for the better, anyway), and the coming elections would only take the Knesset further away from any peace plan, with about 100 (five-sixths) MKs in parties defined as being either in the “center” or the right. No international sanctions seem to be around the corner to back the symbolic gesture, and unlike last September, there was no sense of a build-up towards renewed popular uprising.

And still, I went to Ramallah, looking for some kind of hope. After all – this was supposed to be a historic day, feared by Israel, symbolizing growing support for the anti-occupation cause even amongst Israel’s allies in the EU, and the shining achievement that PA officials have been struggling to gain for months if not years.

The big beautiful full moon rising over road 443 seemed to be a good sign for the evening to come. The traffic jam at Qalandia checkpoint could have made one think that people were rushing back home from Jerusalem to join the celebrations. But the closer you got to Ramallah’s city center, the less traffic you had to face – not what one might expect when nearing a major public event, and sure enough Arafat Square (formally Clock Square), where the screening was about to take place, was virtually empty, aside from the many television crews and photographers looking around aimlessly for something to do, and interviewing random uninterested passersby. “Well, maybe the masses will just turn up later, when it all starts,” I wished. And they didn’t. Not really.

So very far from Tahrir

By 22:00, when the live video from the General Assembly came up, there were few more than 300 people gathered near the screen. By 22:30 the event reached its peak, with about 1,000 people – leaving the small square about half empty. About half were police, journalists, foreigners, and young men who were said to be Fatah Youth, called up in a hurry when officials realized how grim things were looking (as Amira Hass also speculates in her Ha’aretz report today). Last year, said some reporters, more than 10,000 people swarmed the area, packing the square and all the surrounding streets. A single Egyptian flag between the Palestinian and Fatah flags (none from other parties) invoked the unhappy comparison of this fairly quiet crowd with the ones packing Tahrir Square during the revolution and again in recent days. 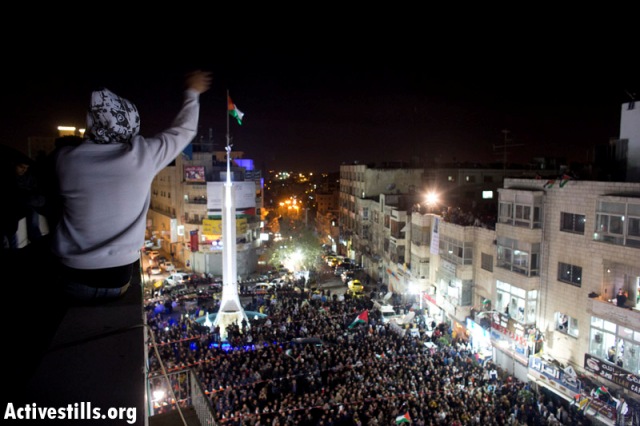 Arafat Square in Ramallah – only half full (Oren Ziv / Activestills)

“The people will be happy once they actually get their state,” estimated Muhammad Khatib, of the Bil’in Popular Committee against the Wall and Settlements, commenting on the small turnout. Khatib and several others in the square agreed that the one thing serving Palestinians best is that Israel is headed by Netanyahu and Lieberman. “Had it been Peres, Livni or any of those, practicing the same policies, the world would have bought their lies – but with these leaders of yours things are plain and clear,” laughed Khatib.

After Abu Mazen’s speech and a loud “boo” for the Israeli, the crowd started to disperse. The live video was replaced with PLO speakers on stage, music and some dancing, which no more than 100 people joined. By the time the vote actually took place, only some 400 people remained in the square. Something in their celebrations had an untrue ring to it, and photographers had to settle for pictures of ten people dancing and waving flags instead of rooftops shots of large masses. A few shots of joy were fired in the air from the random pistol (injuring one boy who was hurried away to the hospital), and within an hour only the municipality workers were left to clean up the mess and dismantle the stage. A few cars playing loud music and driving around town into the night was all that remained of the celebration. By morning, Ramallah had gone back to its routine life.

There is a crack in everything

Leaving the city for the weekly demonstration in Bil’in on Friday at noon I thought for a moment that I found the hope I had been looking for. Something about the move into the country, especially with the dazzlingly lively orchards surrounding the Ein A’rik natural spring, and the calm and ease of the villagers there, suggested a romantic notion of simplicity, and of a people entrenched so deeply in their homes and lives, so strongly connected to the ground, that nothing – not even the occupation – could destroy.

But then, just a minute’s drive away, was another settlement, which may well expand now towards the village with the government’s new plan to punish Palestinians for turning to the UN by building thousands of new settlement homes. And then Bil’in, with the wall as present as ever, the tear gas as burning as ever, the rubber coated bullets flying by close as ever. 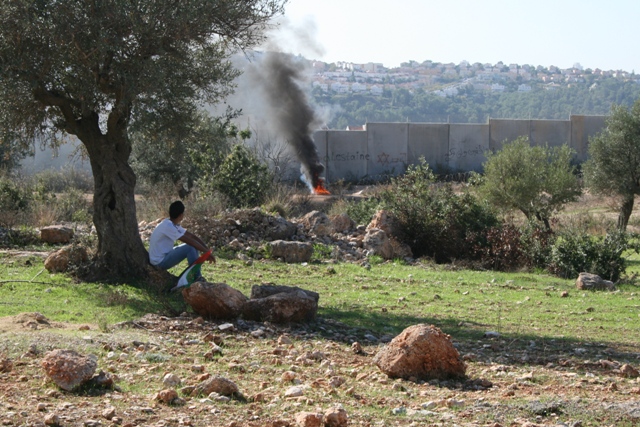 Still, in the face of all this brutality, the people of Bil’in still maintain their resistance and keep on fighting for their stolen land, every Friday in all weather, for more than seven years now, with other villages joining them over time. UN bid or no UN bid, new Israeli sanctions or no, these brave people will still be out there in their unarmed popular struggle, waiting for the rest of the Palestinians to join. And perhaps this is where hope truly lies.

emailemailemail
Before you go…
A lot of work goes into creating articles like the one you just read. +972 Magazine is nonprofit journalism, owned by many of our writers, editors, and journalists. In order to safeguard that independent voice, we are proud to count you, our readers, as our most important supporters. With your support, we can keep +972 Magazine a strong, independent, and sustainable force helping push the global discourse on Israel/Palestine.
DONATE
More About PLO