While Eritrean asylum seekers cannot be deported due to the risk they would face upon return, the new Prevention of Infiltration Law enables Israel to keep them in prison indefinitely. New arrivals, most having faced rape and torture en route to Israel, are presently being held in a prison in the desert, and nobody knows how long they’ll be kept there. A visit to Ketsiot prison. 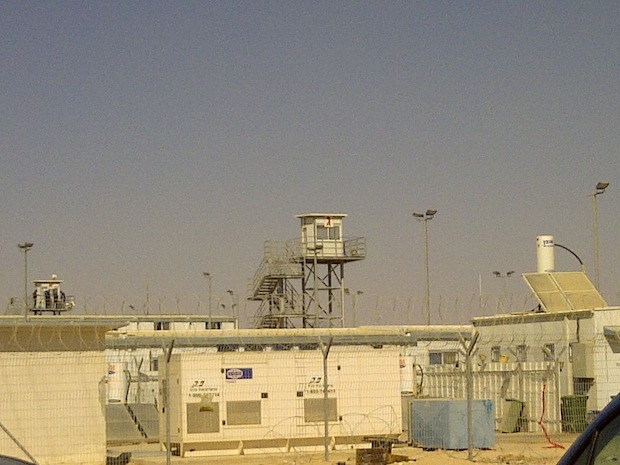 Almost three years ago, I wrote about how much I hate the journey to Ketsiot prison; how frustrating it is there, even for the fleeting visitor who knows that at the end of the day he’ll be free and safe in Tel Aviv. I wrote about the despair of the asylum seekers, who are locked up for days on end, not knowing until when. Although I know the right thing to do is to visit again and again, as often as possible, lately I have been doing so less and less, for my own peace of mind. Because even though in the three years since I poured out my bitterness most of the Prison Service staff was replaced, the situation in this desert prison has only deteriorated.

But sometimes there is no choice, like yesterday, when Mesi, Yuval and I were forced to return to that awful place. The thermometer in Yuval’s car read 39 degrees Celsius as we were getting out. We waited in the central courtyard of the growing prison. To the north (or so at least it seemed to me), they had already added two-story buildings to hold additional asylum seekers. The detainees are currently imprisoned under the new Prevention of Infiltration Law, which allows for the administrative detention of immigrants without legal status for an unlimited period of time (or for a minimum period of three years).

In the two months since the authorities began to use this draconian new instrument for detention, not one person has been released. The Detention Review Tribunal, which has judicial oversight over the detention of asylum seekers under the Prevention of Infiltration Law, has become the law’s rubber stamp. In practice, there are no circumstances under which the new law enables the release of detainees, so all that is left for the judges to do is to see detainee after detainee, to hear his or her story, and to inform him or her that they have no option but to approve the detention order.

The heat in the courtyard is unbearable, and one can only imagine what it feels like in the prison wings, and particularly for the women and children, who are held in tents during this scorching summer. Most of the detainees are Eritrean. “They’re not refugees,” we’re told by the interior minister and the prime minister, who in the same breath admit that we can’t deport them, because deportation would place their lives at risk. The camp, therefore, is not meant for the “illegal immigrants” awaiting deportation, but intended to exhaust and discourage the asylum seekers who can’t be deported.

The camp exhausts and discourages us, too. Most of the Eritreans here endured many months of severe torture at the hands of the smugglers in Sinai, in order to extort money from their families. Most of the Eritrean women were brutally raped, repeatedly, by the smugglers in Sinai. The first asylum seeker we interview recounts being cuffed at the hands and feet, electrocuted, having cigarettes extinguished on his arms, being hung by his arms and burned with white hot iron rods. These descriptions are familiar, from conversations with other asylum seekers, from a Physicians for Human Rights – Israel report and from the Hotline for Migrant Workers’ report. Yet this firsthand account terrifies us. But when we get to the third interviewee who tells us the same horror story, I’m already whispering to Yuval, “Compassion fatigue.” Yuval nods. Our psychological defenses have kicked in.

The High Court of Justice recently recommended that the State set out guidelines addressing the rights of Eritreans, whom it is forbidden to deport. The State’s response, which finds its expression in Ketsiot prison, is: “They have no rights; eternal detention for all.” If once we could take comfort in the fact that the Eritreans we met in prison fell under the “temporary protection” policy, and would be released soon, today we have no words to comfort those we meet. All that is left for us to say to them is that we don’t know how long they will wait in this boiling hell, and that we know how hard it is for them to be there. (Although we don’t really know, and apparently never will know quite how hard.)

One can assume that in the interior and justice ministries, they will read these lines and smile with satisfaction, saying that this was their very intention – for people to know they won’t be released for years, and to send a message: “Don’t come.” Yet anyone with even the slightest experience and understanding of migration issues knows that’s not how it works – walls, prisons, starvation and degradation have never deterred immigrants, whether they’re refugees or economic migrants. These instruments are good for satisfying public opinion thirsty for a heavy hand, and for shaking off a sense of idleness, but they do not prevent migration. The Interior Ministry is already boasting about the drop in entries into Israel in the last month, but if you want to know the reason for this ebb, you had better turn your attention to what’s happening in the Sinai Peninsula and Libya. This ebb has nothing to do with Bibi and Yishai’s magic tricks. 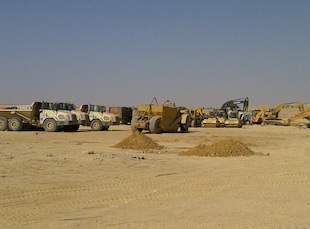 Around the prison, a huge area is being prepared for construction of a new facility, which will be able to hold thousands more asylum seekers. Making the desert bloom, indeed – bloom that is entirely evil. When we leave after a depressing day, we photograph the construction going on around us for awhile and travel north, leaving the men and women we met behind, where they’ll be staying for quite a while longer.

Joseph Carens wrote, over two decades ago, that citizenship in the “West” today is comparable to feudal privileges – a hereditary status that improves one’s chances in life. For those not born with this status, it is almost impossible to acquire. Like hereditary feudal privileges, this is very difficult to justify.

When I return to my two-room apartment in Tel Aviv after the visit to Ketsiot, it really does feel like a palace.

Yonatan Berman is the director of the Immigrant Rights Clinic at the Academic Center of Law and Business. This post originally appeared in Hebrew on the blog Laissez Passer, and was translated by Caroline Beck.