One government inherits the siege from another, the prime minister admits it’s more harmful than helpful, the cabinet never formulates or even discusses a policy, and one minister goes as far as admitting that the only driving force behind Israel’s Gaza policy is inertia. 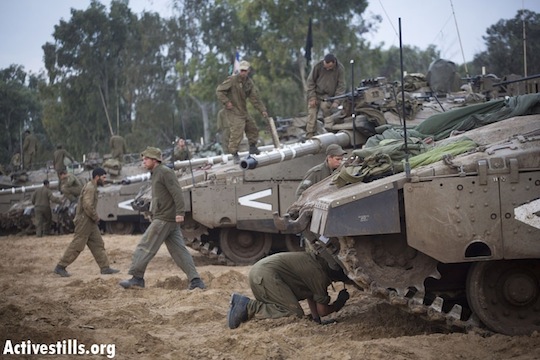 Israeli soldiers inspect their tanks on the Gaza border during Operation Pillar of Defense in 2012. (Photo by Activestills.org)

There is something tempting about trying to connect all the dots, which show that every decision made by successive Israeli governments have just been part of one giant, logical process. It doesn’t matter whether the final outcome is cold and cruel — at least we can find solace knowing that all the pain and injustice is part of a rational calculus. A few days ago it was Haggai Matar who tried to connect the dots. His conclusion: Operation Protective Edge was intended to cause unbelievable destruction in Gaza, which will cause the Palestinians to deal with reconstruction for years, thus prolonging the occupation.

I think Matar is wrong, and that the truth is worse and more complex than he wants to believe. If we connect all the dots of Israeli policy, we do not get a secret plan, but rather a picture of Defense Minister Moshe Ya’alon attempting to think; there is no rational calculus behind all the injustice and pain, only coincidence and covering one’s ass.

A few days ago, at a conference put on by the Institute for National Security Studies (INSS), Likud’s Dan Meridor told an anecdote from the previous government (Hebrew). Meridor, who was then the deputy prime minister, asked at a 2010 cabinet meeting why there was a blockade on Gaza. “Inertia,” answered Ehud Barak, who was then the defense minister, and everyone continued about their business. This took place during a meeting in which members of the government discussed how to prepare for the flotilla that was approaching the shores of Gaza. Meridor did not describe what happened after Barak answered him, but seeing as the blockade did not end, it seems like “inertia” was a a satisfactory answer.

The blockade was not lifted even after the flotilla, despite the fact that it was inherited by the Olmert government and despite Netanyahu admitting that the “civilian blockade harmed the security blockade.” (Hebrew) Inertia. We also know that there was hasn’t been a discussion on the policy vis-a-vis Gaza for years. (Hebrew) During his tenure as head of the National Security Council (part of the Prime Minister’s Office), Uzi Arad admitted that there was no discussion about Gaza among members of the government. The same thing was stated by a senior investigator back when the National Security Council was run by Yaakov Amidror.

The truth is that it is easier to think of Protective Edge as a mistake, as an escalation that got out of control, rather than to assume that it is part of a larger plan. The operation lit a small fire under the West Bank and East Jerusalem, hurt the international legitimacy of additional Israeli military operations, and coerced the government into giving up on the opportunity to manage the conflict in Gaza separately from the West Bank.

Rounds of fighting are an integral part of managing the conflict. They are certain and likely. When Amidror speaks of the Gaza Strip, he sees only two options: occupation or military escalation every few years. Members of the defense establishment say that they hope to prevent the next round of fighting, but also speak of enlarging “the period between rounds of escalation and fighting.”

Actually, in terms of managing the conflict, Protective Edge looks like a disaster. It forced the government to agree to significant changes in order to remain in place. The occupation is still here, but the ground has slightly shifted. For the first time in a while, there is a chance of seeing a significant change in the government’s policy regarding Gaza — a change that has a huge effect on the lives of hundreds of thousands of people. We now speak of allowing building materials into the Strip; about marketing goods from Gaza in the West Bank, for the first time since 2007; about allowing Gazan students to study in the West Bank, since 2000; and it seems that residents of Gaza will have an easier time changing their residency and moving to the West Bank, even in cases that are not considered “exceptional humanitarian cases.” And that’s a lot.

Perhaps we are seeing a drastic change in policy, and in the understanding that restricting civilians’ movement is not a bargaining chip. But perhaps instead of a change in policy we will only get another variation on the same theme. That is what happened after the 2010 Gaza flotilla, in which Israel responded to international pressure to allow goods into the Strip, while maintaining all other aspects of the blockade.

It is too early to predict whether the government is planning to replace the blockade with some sort of blockade-lite, and tracking this issue is going to be difficult, boring and full of details. The media and politicians have a tendency to get bored of these discussions. And if that is the case, the next escalation is not far away. Amidror is already drawing up plans.

Itamar Sha’altiel is the new media director at Gisha – Legal Center for Freedom of Movement. This article represents his own views. This article was first published on +972’s Hebrew-language sister site, Local Call. Read it in Hebrew here.