According to the proposed ‘Jewish Nation-State Law,’ Israel does not belong to Israeli citizens, more than 20 percent of whom are not Jewish. Instead, it is the state of the Jewish people, roughly half of whom are not even Israeli. 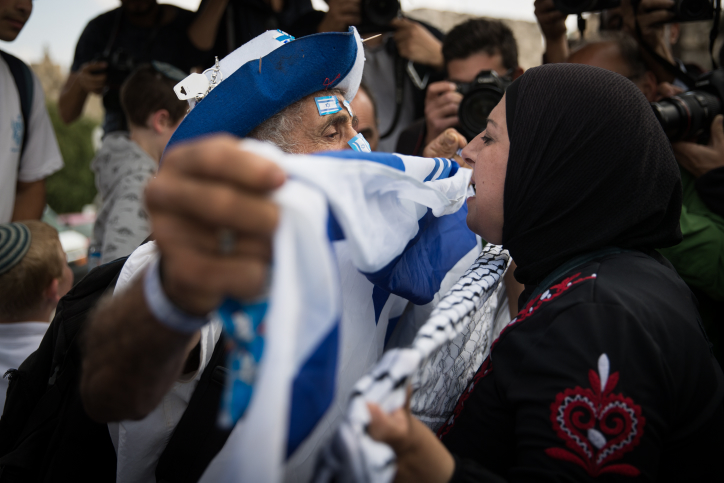 A Jewish Israeli man holding an Israeli flag confronts a Palestinian woman holding a kaffiyeh on the sidelines of the ultra-nationalist “Jerusalem Day” march, May 13, 2018. (Yonatan Sindel/Flash90)

There is a form on the Israeli Interior Ministry’s website, where one can order duplicate and translated copies of a birth certificate. On that form is a drop-down menu, above which it is written: “Nationality.”

In that drop-down menu you will find a list of nationalities which — if one were to attempt to deduce from it how Israel defines nationality — defies all logic. The nationalities listed include ethnicities without their own states, states without distinct or exclusive nationalities/ethnicities, and long-defunct “minority rule” colonial constructs.

What you won’t find is the one nationality you might most expect to: “Israeli.” As absurd as it may sound, the State of Israel does not actually recognize an Israeli nationality. In fact, the state has on several occasions argued in court that no such a nationality exists.

(To be fair, speaking of things Israel refuses to exist, the Interior Ministry drop-down menu doesn’t include the “Palestinian” nationality either.)

That Israel does not acknowledge an Israeli nationality is crucial for understanding why a “constitutional amendment” currently being proposed by Netanyahu and his government — the Jewish Nation-State law — is so problematic.

According to Netanyahu and his government’s proposed law, Israel does not belong to Israeli citizens, more than 20 percent of whom are not Jewish. Instead, Israel is the state of the Jewish people, roughly half of whom are not even Israeli.

Constitutionally anchoring two classes of citizens — those to whom the state belongs and those to whom it doesn’t — is particularly problematic when you consider that Israel doesn’t have any constitutional guarantees of equality on the books. And considering the number of discriminatory laws already on the books (from family unification, immigration, land ownership, housing discrimination, etc.), it’s not a stretch to imagine any number of situations in which the courts determine “Jewish” rights to trump principles of equality once the Nation-State Law is passed.

One of those scenarios is actually enshrined in the current version of the law: it constitutionally legalizes segregation. True, there are already legal ways to create segregated communities in Israel, but the new law would make the very idea of segregation something that is integral with the state’s values.

The Jewish Nation-State Law also specifies that the right to realize national self-determination in the State of Israel — the right to decide upon self-governance and what it looks like — is uniquely held by the Jewish people.

Those points, and particularly the last one, may seem relatively innocuous, particularly when coupled with the argument that most (but not all) rights in Israel are derived from citizenship and not nationality.

And that might be a reasonable, albeit flawed argument — if Israel didn’t un-democratically rule over millions of non-citizen subjects in an occupied territory the current government sees as its own.

What does granting Jews the exclusive right to self-determination look like as Israel advances its creeping annexation of the Palestinian territories? What does it mean for Jewish Israelis living in the West Bank, who in a walking, talking manifestation of apartheid, carry with them Israeli civilian law while Palestinians in the exact same physical space are subject to Israeli military law?

What does it mean for the Palestinian national movement, which seeks to exercise Palestinian national self-determination in a territory the Israeli government would like to see become a part of Israel? What does it mean for the growing movement pushing for a single, democratic state for Israelis and Palestinians that guarantees equality for all, particularly if the most efficient means to that end is to demand equal rights under the existing Israeli regime?

Last month, the Knesset presidium rejected out of hand a counter-proposal to the Jewish Nation-State Law: the “State of All its Citizens” law. Submitted by the mostly-Palestinian Joint List party, the proposed Basic Law sought “to anchor in constitutional law the principle of equality for every citizen, while recognizing the existence and rights of two national groups, Jews and Arabs, who live within the state’s internationally recognized borders.”

Earlier this week, the Joint List MKs again submitted a constitutional alternative to the Jewish Nation-State Law, this time called the “Democratic, Multi-Cultural, and Egalitarian State” law. It, too was rejected by the Knesset without even being debated.