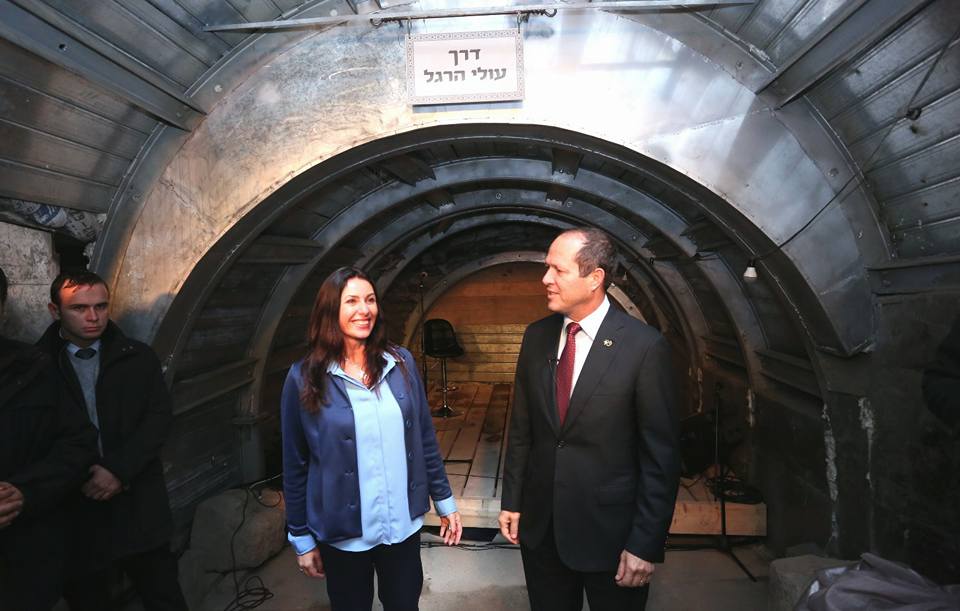 “I didn’t think I would be so excited,” said Culture Minister Miri Regev. “Mr. President Obama, I am standing here on the path that my forefathers walked 2,000 years ago. There is not another nation on earth that has such an attachment to its country. Not the Ukrainians, not the New Zealanders, not the English. There is not a nation on earth that has a connection to its land like the Jewish people do to the Land of Israel.”

Regev said these words in East Jerusalem at the opening ceremony for “Olei Ha’regel” (“The Pilgrims”) in the City of David — a network of tunnels that have been dug over the past few years under the Palestinian village of Silwan. The goal of the ceremony was to mark 50 years since the unification of Jerusalem, to strengthen Jewish settlements in the eastern part of the city and rally its supporters — from under the ground — with political declarations against the Jewish people’s token enemy (in this case, Obama).

From below the ground it is so easy to forget the crowded, derelict village that for years has been struggling for basic rights. The tunnels, which were dug by the Israel Antiquities Authority for settler organization Elad, expose parts of an ancient street that, according to the diggers as well as the politicians who frequently attend ceremonies at the site, dates back to the Second Temple period. During these ceremonies, politicians tend to speak about the right of the Jewish people to its land. The two politicians present at this ceremony — Miri Regev and Jerusalem Mayor Nir Barkat, who these days is running a campaign to lead the Likud party from the mayor’s office — focused on this historical connection in order to justify the occupation. They argued that the entire world needs to come see the remains of the streets, which are surely enough to prove to whom this country truly belongs.

But the Roman street that was dug was a main road on which many walked — not only Jews. It was a busy place that did not necessarily have much to do with holiness or Judaism — yet these aspects of daily life aren’t good enough for the politicians. The street that was exposed in Silwan is not holy. On the contrary, it is the essence of secularism. Throughout ancient history, main thoroughfares would be lined with both houses of worship as well as regular, non-religious buildings. But those behind the digging, along with the politicians, prefer “Olei Ha’regel,” thus turning an ancient Roman street where people walked freely irrespective of religion, race or sex, into a street for Jews alone. Not only Jews, but pilgrims making their to the Holy Temple. The most religious of the Jewish people.

Few articles have been published on these tunnels, and the fact that they were dug horizontally (rather than vertically from the surface). This type of digging is considered inaccurate and destructive, making it very difficult to understand the various layers and the length at which they were in use. Silwan and Jerusalem’s Old City are the only places in the world that employ this style of digging. Over the past 100 years, archeological digging has been done from the surface into the earth; if digging becomes problematic, it is generally preferable to leave the surface as is. Furthermore, we should take the dating of the street with a grain of salt — it is very possible that it was built after the first century AD.

According to the little we know, the street was built to connect the southern part of the city to the center. In the Roman world, including Jerusalem, there was no differentiation between religions or nations. Anyone who accepted Roman rule could live in their territory and walk their streets.

Thus, the newly exposed street tells us very little about national identity or holiness. But Miri Regev and Elad know that there is no way to get entire segments of Israeli society to support their nationalistic and extremist policies without a story of Jews going to war against a cruel and powerful enemy. The irony is that this street is used to talk about the zealots’ war against the Romans — a war they eventually lost.

The author is an archaeologist and director of Emek Shaveh. This article was first published in Hebrew on Haokets. Read it here.