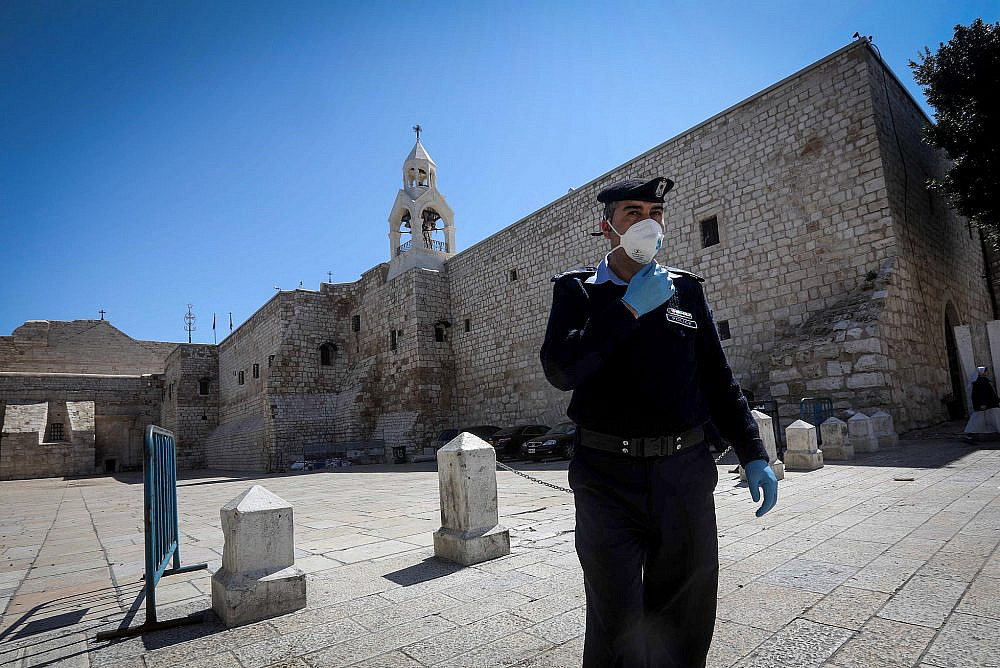 A Palestinian police officer wears a mask to protect himself from coronavirus stands outside the closed Church of the Nativity in the West Bank city of Bethlehem, March 8, 2020. (Wisam Hashlamoun/Flash90)

Already surrounded by Israel’s separation barrier, it has not been too difficult to close off the Bethlehem area after Palestinian Health Minister Mai Al-Kaileh confirmed seven cases of the COVID-19 virus on March 6, all linked to a group of Greek tourists who stayed at a hotel in the neighboring town of Beit Jala.

The Palestinian Authority declared a state of emergency, barring all foreign visitors into the city for a closure that could extend to 30 days. It also ordered all schools, universities, mosques, and churches closed — including the Church of the Nativity, which Christians revere as marking the spot where Jesus was born.

On Monday, Jordan announced it was also closing the Allenby Bridge, the main crossing used by Palestinians and Jordanians to travel to and from Jordan.

By Tuesday afternoon, the Palestinian Health Ministry had announced nine more cases of the virus — four in Bethlehem, and one in the northern West Bank city of Tulkarem of a Palestinian laborer who works in Israel — bringing the total number of cases up to 29. As of March 10, the ministry indicated there are a total of 2,900 people in home quarantine in Bethlehem and 114 more outside the city. Fifty-three people are in government quarantine facilities in Bethlehem and Jericho, including two in Gaza at the Rafah crossing. 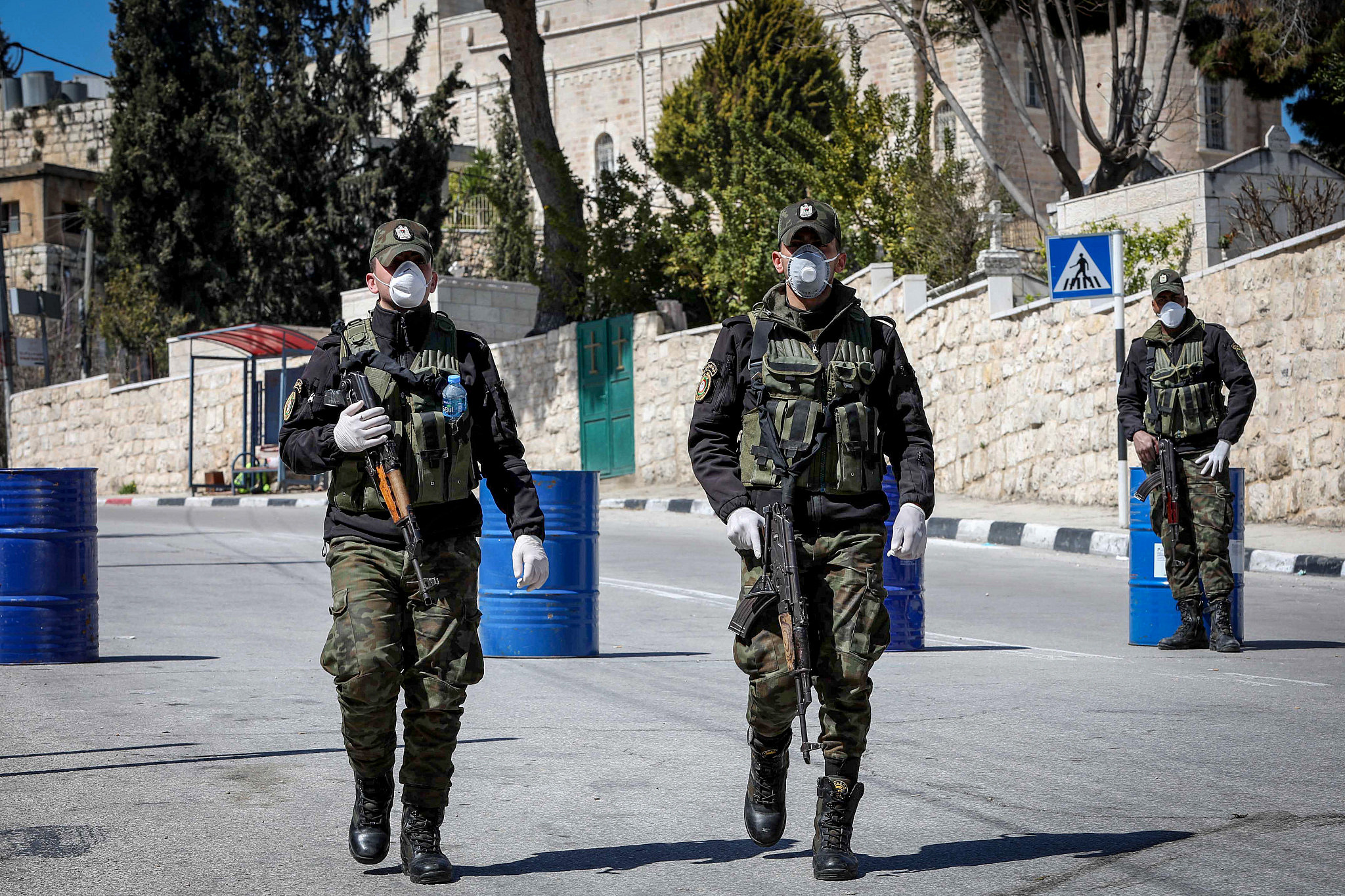 For now, only one patient has shown a slight deterioration in his health but has been stabilized, according to the WAFA Palestinian news agency. All others diagnosed with the new coronavirus disease, which was first detected in late 2019 in China, are asymptomatic. For most people, symptoms can include fever, cough, and difficulty breathing, although older adults and people with existing medical complications may develop more severe symptoms, including pneumonia.

With an Israeli-enforced lockdown and a few tin barrels placed by Palestinian police in strategic exits without an Israeli checkpoint, the area was effectively cut off, with no one permitted in or out of the city. In the first days of the outbreak in Bethlehem, though, there seems to have been some exceptions, as a group of doctors and nurses at the St. John of Jerusalem Eye Hospital were given special permission to leave Bethlehem to come work at the hospital, according to one of the nurses there.

“It is easy to close down Bethlehem. Bethlehem is a big Bantustan,” said George Rishmawi, the executive director of Masar Ibrahim Al-Khalil, referring to the term used in Apartheid South Africa to describe the territory set apart for black South Africans. “It is easy to isolate Bethlehem with the system put together by Israel.”

While supporting the need for such a quarantine at the moment, Rishmawi said this is just an early warning of how the system would work should U.S. President Donald Trump’s “Deal of the Century” be implemented, with Israel limiting movement in Bantustan-like areas, he said. 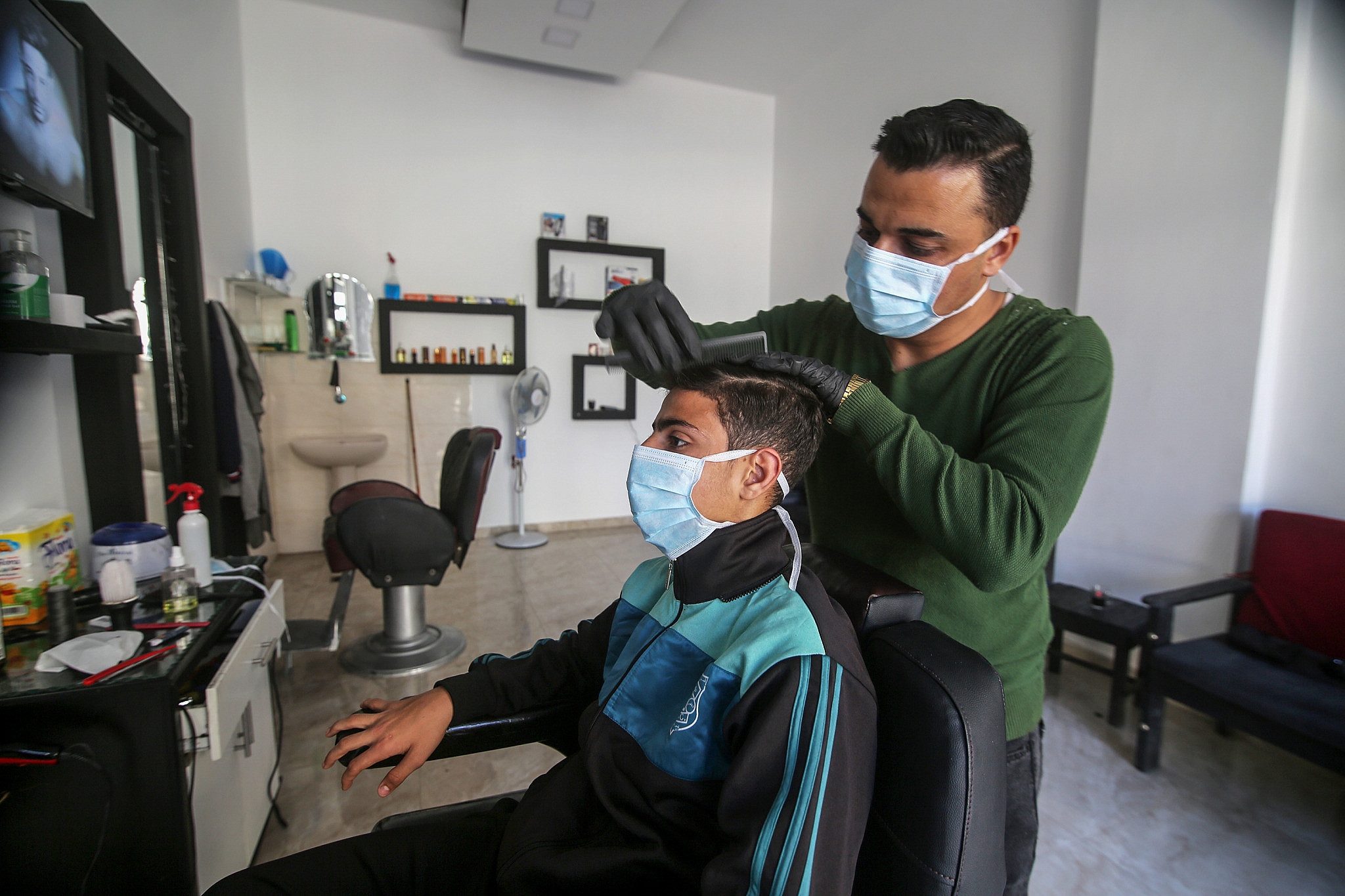 Palestinians wear face masks for fear of the coronavirus at a barbershop in Khan Yunis, southern Gaza Strip, on March 7, 2020. (Abed Rahim Khatib/Flash90)

“This is how it will really be happening and how, in the long run, it will affect us,” he added.

But for now, he continued, Bethlehem area residents are taking care to restrict their movements within their towns, and cancelling all family visits and events.

“People are putting themselves under quarantine not just for themselves but for (the safety) of others as well,” he said.

On Sunday, the Israeli Health Ministry said people who had been to Bethlehem and the nearby towns of Beit Jala and Beit Sahour in the past 14 days would need to enter self-quarantine for as many days. Also on Sunday, Israeli Defense Minister Naftali Bennett said that he is considering closing off Palestinian areas of the West Bank, and asked for the District Coordination Office of the Civil Administration, the Israeli military body tasked with administering the occupation, to provide him with an assessment of the economic implications of such a closure by Monday.

Dr. Yael Berda, visiting assistant sociology professor at Harvard University of the Department of Sociology from the Hebrew University in Jerusalem, and author of “Living Emergency: Israel’s Permit Regime in the West Bank,” questioned how such a closure would be feasible in areas of the West Bank where settlements and Palestinian villages are intertwined, such as the Gush Talmonim settlements, or Rahelim, which is adjacent to the Palestinian towns of Yatma and Qabalan.

To effectively slow the spread of the virus in Area C of the occupied West Bank, which is under the full control of the Israeli army as per the 1993 Oslo Accords, both Jewish Israeli settlers and Palestinians would have to be quarantined, she explained. Monitoring mobility in relation to the coronavirus requires monitoring the mobility of everybody, regardless of any security threats or political affiliation, she added. 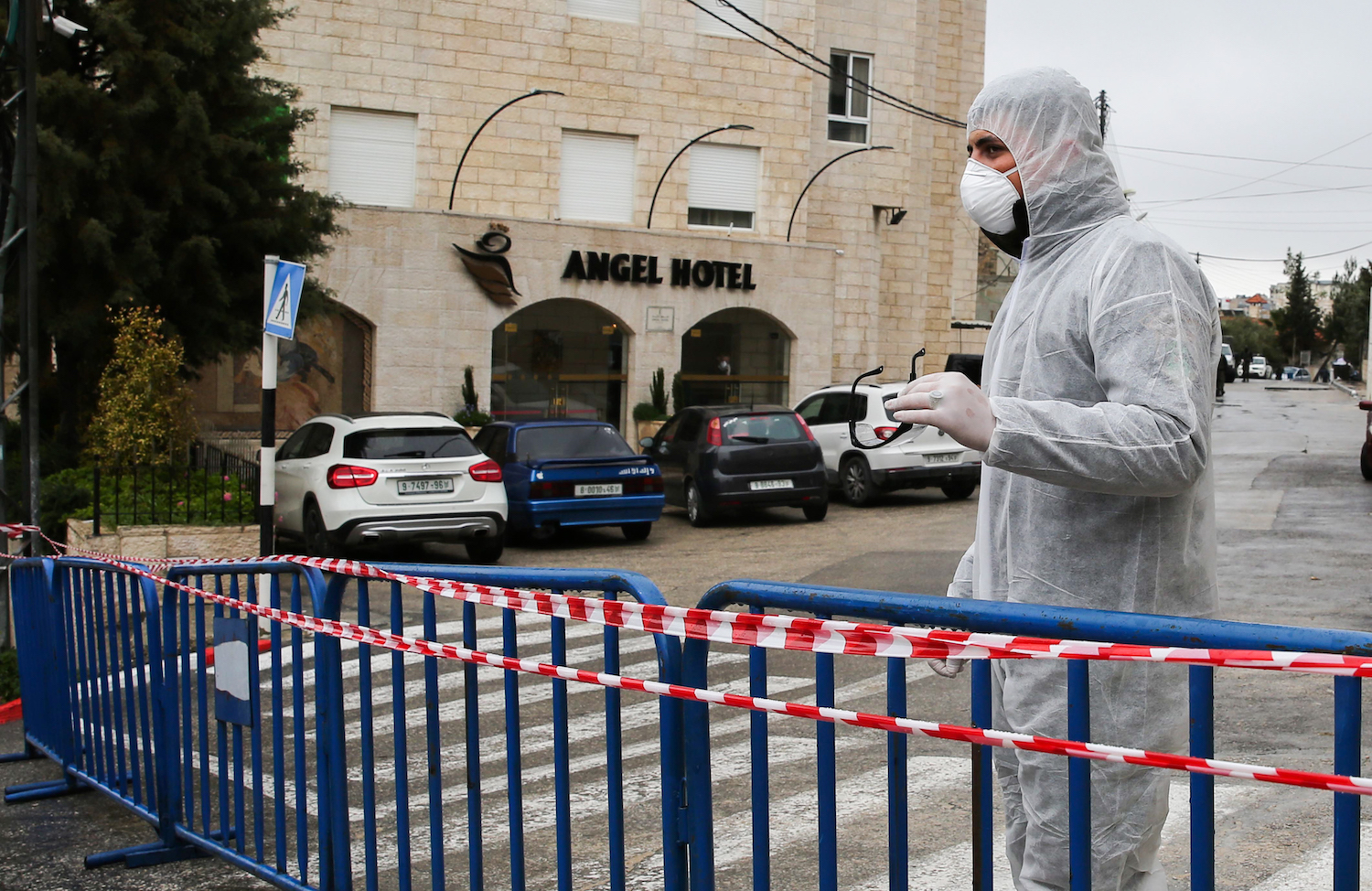 Palestinian security forces wearing face masks block the entrance to the Angel Hotel in the town of Beit Jala, near the West Bank city of Bethlehem, March 5, 2020. (Wisam Hashlamoun/Flash90)

“When there is an actual emergency, [you see that] the permit regime — which is allegedly an emergency regime put into place for security to prevent terrorism — is much less a security measure than really a system of control and segregation,” said Berda. “If you close off Palestinians, you [need to close off] Israelis too,” she continued, because it is a matter of public health, and not an issue of security. “Anyone can catch the coronavirus.”

One positive outcome of the closure is that it may bring attention to the daily control of mobility that is omnipresent in Palestinians’ lives, but which most Israelis don’t even know exists, said Berda.

In Bethlehem, residents described the streets of the city as deserted and eerily empty, with people only venturing out to buy essentials during what is normally a high tourist season in the weeks leading up to the Easter holiday.

For many residents, the biggest concern at the moment is the loss of work and income caused by the overreaching closure. Though they say they understand the need for it, the lockdown has not only decimated the tourism industry, on which the area depends, but also will prevent Palestinian day laborers from reaching their work places in Israel.

According to Samir Hazboun, chairman of the Bethlehem Chamber of Commerce, some 20,000 people who work in the tourism industry and another 15,000 day laborers from the area have been affected by the closure.

“Life has been paralyzed in Bethlehem,” he said. “Workers are trying to get out but they can’t. There is also the [Jewish holiday] Purim, so also Israel is not working. The situation does not need any politics to be explained. We have a closure but basically we are trying to manage with our resources and with our good will and hard work. We hope the international community will cooperate with us.” 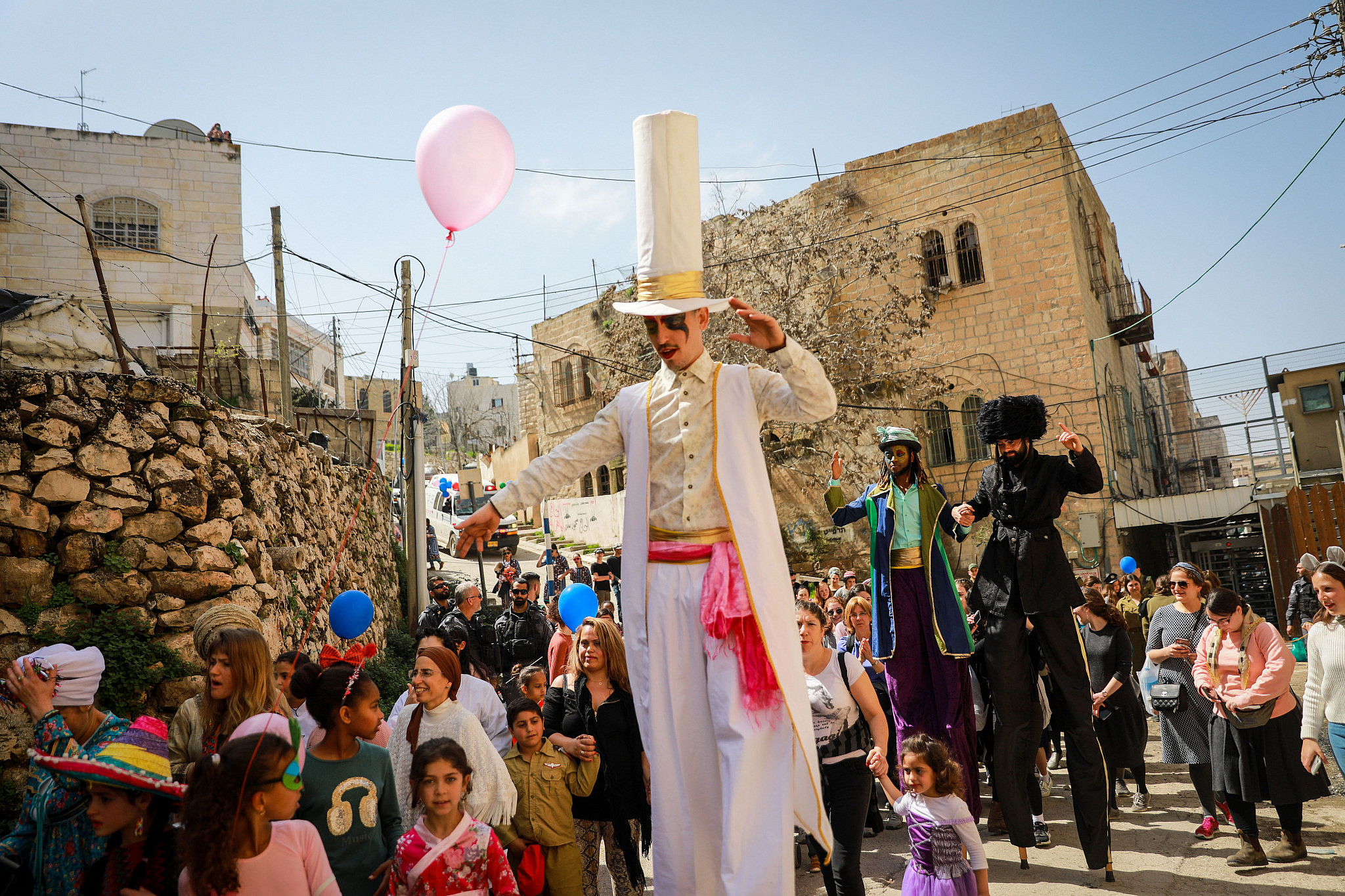 Some residents complained that the Palestinian Health Ministry had been ill-prepared for such an outbreak. Part of that, explained Rishmawi, is because of the faltering health system the Palestinian Authority inherited from Israel.

“The Ministry of Tourism dealt with the situation very well but the Ministry of Health should have [started] to make regular visits and testing. We know the health system is very bad, but I trust the strict measures by the Palestinian Authority,” said Rishmawi.

He said that the Palestinian Authority inherited a very poorly-run health system, which, prior to the Oslo Accords, was under the control of the Israeli occupation. Now, 39 percent of the Palestinian budget goes to funding Palestinian security forces, which he says are responsible for taking care of Israel’s security needs. Instead, this money could be used toward Palestinian health or education initiatives.

“Even now, the [coronavirus] tests are conducted in Ramallah and then confirmed at an Israeli hospital,” he said.

Dr. Gerald Rockenschaub, head of the World Health Organization’s office in the occupied Palestinian territory, said that in principle, the PA has put in place the appropriate measures, together with behind-the scene coordination not only with Israel but also with neighboring Egypt and Jordan.

“They have a good capacity in place,” he said, noting that the WHO had ensured their diagnostic capacity was set up a week ago, bringing in test kits and controls to both Ramallah and Gaza labs, which have been already certified as influenza labs, and some 800 personal protection equipment kits for medical workers. The World Bank and other donors have stepped up with resources to fill in the gaps which still exist, he added.

“There is a constant dialogue between Palestine and Israel. Both are aware the virus doesn’t respect any borders. We are jointly in this so we will jointly succeed or we will jointly have even a bigger problem,” said Rockenschaub. 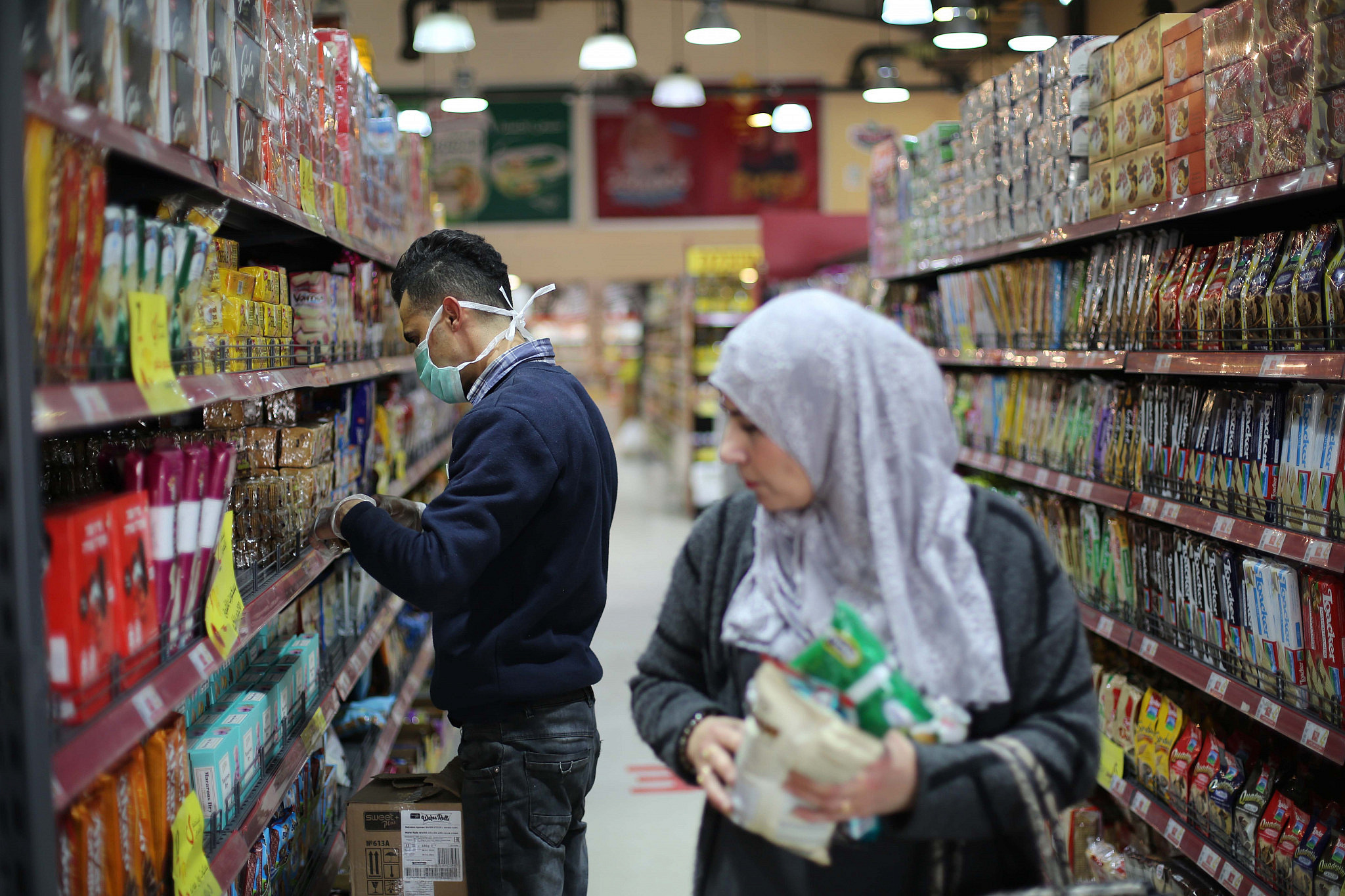 Palestinian workers wear face masks for fear of the coronavirus, at a shop in Gaza City, on March 9, 2020. (Ail Ahmed/Flash90)

There is concern, however, he said, regarding the capacity of the health system in the Gaza Strip — which is experiencing its own crisis due to the Israeli-imposed blockade — to cope with a massive health crisis, should it arise.

“We have not seen cases there but we know the problem with the health system shortage there,” he said. “If we do see cases, we will need to scale up to manage it within the Gaza context.”

Inside the Angel Hotel, where the initial cases of the novel coronavirus were first diagnosed in Bethlehem, and where some 40 people are quarantined, including a group of 13 Americans, Antwan Saca said that after the first days of uncertainty — including one panic attack — things have calmed down as they wait out the quarantine period. Every day, he added, a doctor visits the group to monitor their symptoms. Saca and two friends voluntarily came to be quarantined after being in contact with their friends, owners of the hotel, who have been diagnosed with the virus, and to help them manage the situation in the hotel, he explained.

“To be honest, the Palestinian Ministry of Health did what they could but they don’t necessarily have everything they need,” said Saca. “Thankfully, we have coordinated with the Palestinian National Guard and…they are functioning beyond well. They gave us all the logistical support…they really are able to function and support people in crisis situation.”

Correction: A previous version of this article referred to George Rishmawi as the director of the community-based tourism organization Abraham Path Initiative. He is the executive director of Masar Ibrahim Al-Khalil.