Bentzi Sau, a candidate for the national police commissioner, has riled Palestinian citizens who continue to experience his interpretation of law enforcement: oppression and harassment. 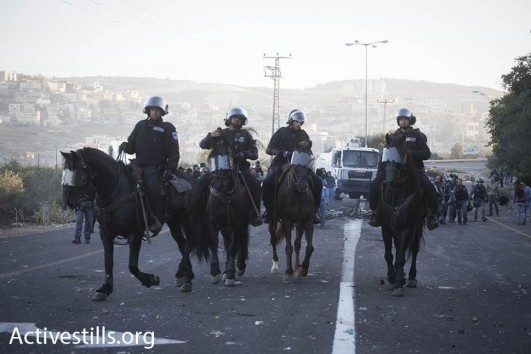 Police on horseback seen during clashes in the village of Kafr Kanna, in northern Israel. (Oren Ziv/Activestills.org)

Last week, a petition issued by the global civic organization Avaaz in Arabic and Hebrew circulated on social media, showing a photograph of a man dressed in police uniform. In its description, the petition declared: “We see that the only place for [this man] is behind prison bars.”

Bentzi Sau, formerly the head of the Tel Aviv district’s police department, has surfaced in the news in recent weeks as a likely candidate for the position of Israel’s national police commissioner, for which he has been serving as a temporary replacement since July. This news, however, has been met with outrage by the Palestinian Arab community in Israel, from Joint List Knesset Members to citizens on social media.

Fifteen years ago, Sau was the commander of the northern district’s Border Police which, under his direction, used snipers and other brutal methods to suppress demonstrations by Palestinians in Israel during the Second Intifada. As a result of his orders, two citizens of Israel, Mohammed Ahmed Jabarin and Ahmad Siam, and one resident from Gaza, Musleh Abu Jarad, were killed, along with countless others who were wounded.

The three casualties were among 13 Palestinians killed by police in what became known as the October 2000 events. The 2003 Or Commission of Inquiry, which investigated the police conduct during the events, concluded that although Sau did not bear personal responsibility for the three deaths, he was directly responsible for sanctioning the police’s lethal tactics, including the use of live firepower. The Commission recommended that Sau be suspended from any promotions for four years. Later, in 2006, the Israeli High Court accepted a petition to block an attempt to appoint Sau as head of the Public Security Minister’s operational staff. 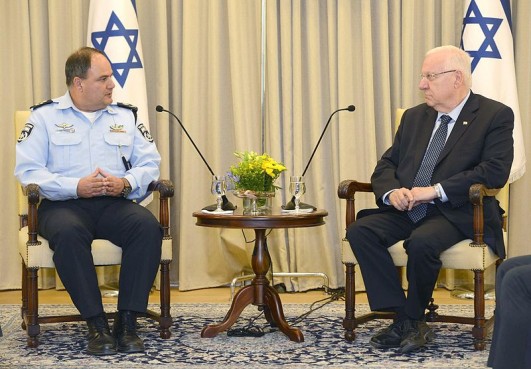 Bentzi Sau (left), meeting with President Reuven Rivlin as Acting Chief of the Israeli Police, on 13 July 2015. In 2003, the Or Commission found Sau to be responsible for the police’s use of lethal tactics, including live sniper fire, against demonstrations by Palestinian citizens of Israel during the events of October 2000, which killed 13 people. Photo from Wikimedia Commons.

The news of Sau’s likely nomination for police commissioner, despite his tainted history, is merely the tip of the iceberg in the deteriorating relations between Israel’s police and the country’s Palestinian minority. While the past week has renewed attention to the violence of Israel’s occupation and its settlers in the Occupied Palestinian Territories (OPT), state-sanctioned violence against Palestinians inside the Green Line, though far smaller in scale, is no less a serious matter.

One only needs to look at the past year to understand this. In November 2014, police officers shot and killed 22-year-old Kheir Hamdan during a raid in Kufr Kanna. Although a video recording of the incident revealed the police’s account to be false and their use of their guns unjustified, none of the officers involved were charged. In January 2015, police fired their guns into the air during clashes at a drug raid in Rahat, killing 20-year-old bystander Sami al-Jaar. The officer deemed responsible was put under house arrest before returning to his job. Only days later, at al-Jaar’s funeral, another Palestinian citizen, 43-year-old Sami Ziadna, was also killed as police suppressed the ensuing demonstration.

The police’s trigger-prone behavior around Palestinian citizens is coupled with an aggressive intolerance for their right to protest, which is supposed to be protected by Israeli law as freedom of expression. As the IDF waged its devastating military operation in Gaza last year, the Israeli police carried out an unprecedented and brutal crackdown on anti-war demonstrations by Palestinian citizens as well as leftist Jewish-Israelis. During the 51 days of the war, the police arrested about 1,500 protesters, the vast majority Palestinians, and nearly a third of whom were minors under the age of 18. Around 350 criminal indictments were also filed against protesters, most of which continue to be dismissed to this day due to legally baseless charges – indicating that they were merely meant to harass and pressure individuals from pursuing further protest activities. 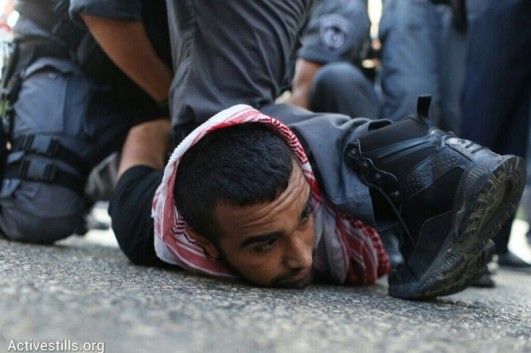 The police’s conduct and heavy presence during the Gaza war echoed the days of Israel’s military rule over Arab communities from 1948 to 1966, which later became the model for today’s military occupation of the Palestinian territories. In fact, many Palestinian citizens see that the scale, arbitrariness and political nature of last year’s arrests greatly resembled the IDF’s detention policies in the OPT. According to a new report by Adalah on the authorities’ crackdowns during the war, the police systematically disregarded Israeli laws and protesters’ rights to fair due process, including in the case of minors, while state prosecutors and court judges effectively complied with the police’s tactics under the frequently cited pretext that the country was in a sensitive “state of war.” It gave the impression that police officers were operating as soldiers, and civil courts had turned into military courts.

Comparisons are also evident in the extensive impunity granted to security forces by extremely dubious bodies. While the IDF has the backing of the Military Advocate General (MAG) – which is tasked with investigating alleged crimes by the military, while also providing it legal advice – the police has “Mahash,” a body partly comprised of former police officials. Because of their dual roles and compositions which create clear conflicts of interest, both institutions have been criticized for lacking the independence and impartiality needed to conduct proper investigations. The statistics alone illustrate this: between 2011 and 2013, out of 11,282 complaints filed to the authorities regarding police misconduct, Mahash allowed only 2.7 percent to lead to criminal charges against officers, and only 3.3 percent to disciplinary measures. 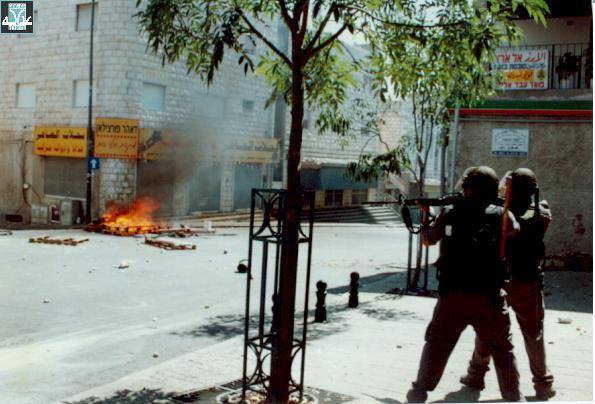 This continued impunity is now reflected in the likely nomination of Bentzi Sau. As the Avaaz petition argues, this choice shows that the state has not learned its lessons since October 2000, and remains inconsiderate to the views and experiences of its Palestinian minority.

If anything, the brutal approaches encouraged by Sau fifteen years ago remain legitimate in the eyes of the authorities to this day, and are thus routinely exercised to effectively achieve the same ends on both sides of the Green Line. At the same time that the IDF uses violence to quell any forms of resistance to military control from occupied Palestinians, Israel’s police uses violence to silence the disobedience of Palestinian citizens against Jewish-Israeli authority. Thus, for Palestinian citizens, Sau’s nomination represents nothing less than another warrant for their violent repression, and, in turn, for their permanent inequality.