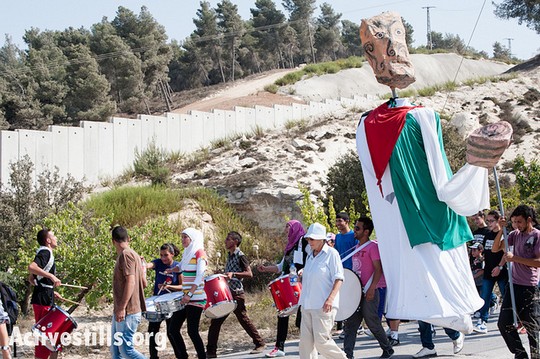 Carrying giant puppets, residents of Al-Walaja, together with Palestinian, international, and Israeli supporters, march through the West Bank village of Al-Walaja to protest the Israeli separation wall, September 28, 2012. If completed as planned, the wall will surround Al-Walaja and cut off its access to surrounding Palestinian communities. (photo: Ryan Rodrick Beiler/Activestills.org) 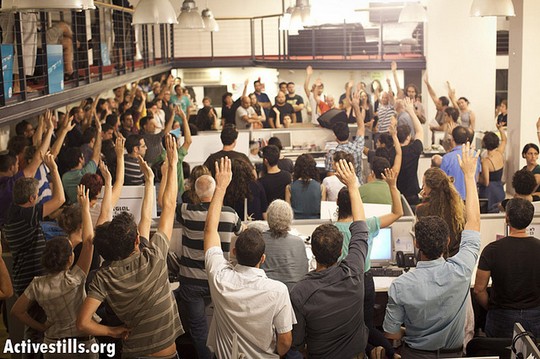 Workers of Haaretz newspaper vote in favor of starting a strike during a meeting in the offices of Haaretz, Tel Aviv, October 3, 2012. The workers began a strike from 4 p.m. to midnight on Wednesday, in protest over the planned dismissal of up to 100 employees. The Thursday edition of Haaretz newspaper was not be printed, and the news sites were be updated during this time. (photo: Oren Ziv/ Activestills.org) 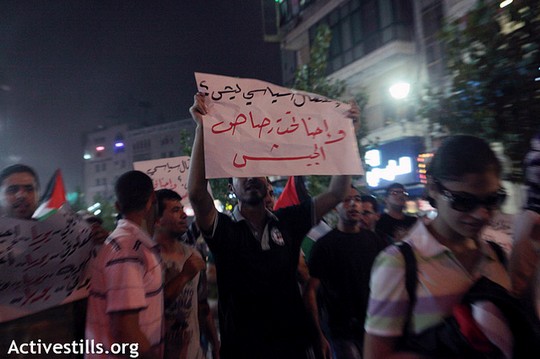 A protester carries a sign reading: “Why security coordination when your people are subject to the army’s bullets?” during a march by about 200 protesters to the Muqata, the Palestinian Authority headquarters, to protest against the latest waves of political arrests by the Palestinian Authority, Ramallah, October 2, 2012. Chants also called for the resignation of President Mahmoud Abbas, and the against the Oslo Accords. (photo: Anne Paq/Activestills.org) 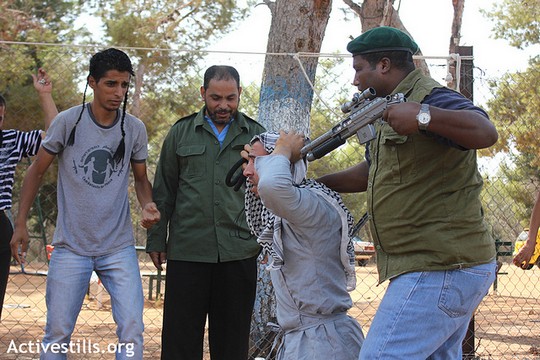 Members of the activist group Combatants for Peace perform a drama as Palestinian, international, and Israeli activists protest in front of the school of Izbat at-Tabib which received a demolition order from the Israeli authorities in August. The village council building, the clinic and the playground have received demolition orders too. 33 of the 55 houses have received demolition orders from Israeli authorities since 2010. One was demolished on May 1, 2012. Izbat at-Tabib is a very small village near Qalqiliya in the north of the West Bank with around 450 residents. It is the fifth poorest village in the West Bank. (photo: Ahmad Al-Bazz/ Activestills.org) 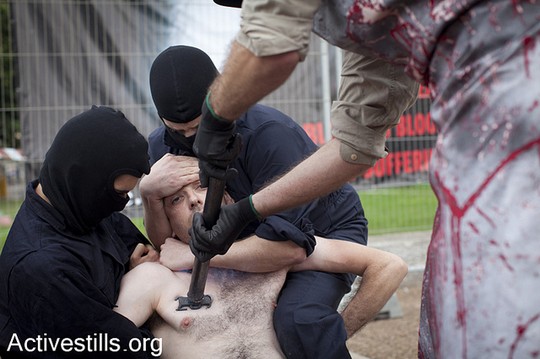 Animal rights activists take part in an action, in which one of them “brands” a number on the body of other activists, using a metal stamp, Tel Aviv, October 2, 2012. The extreme action refers to the custom of marking animals in industrial farms. (photo: Activiestills.org) 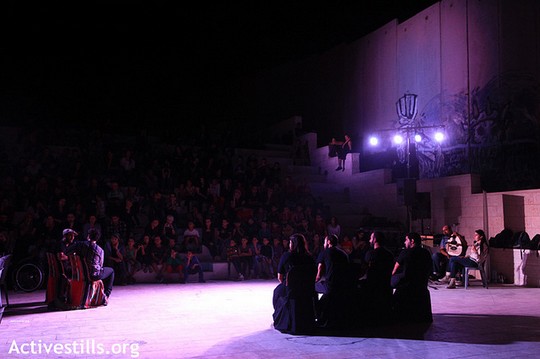 The Freedom Bus, an initiative of The Freedom Theater of Jenin, during a performance next to the Israeli separation wall in Aida Refugee Camp, September 27, 2012. The Freedom Bus used interactive theater and cultural activism to bear witness, raise awareness and build alliances throughout Palestine and beyond. (photo: Anne Paq/Activestills.org) 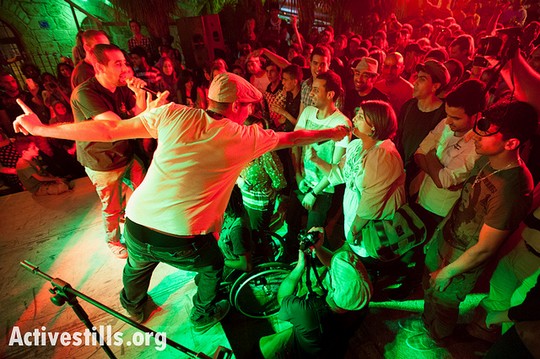 The Palestinian hip-hop group DAM offers the mic to an audience members during their performance at a finale concert for the Freedom Bus tour in Beit Sahour, October 1, 2012. The Freedom Bus, an initiative of the Jenin Freedom Theater, traveled throughout the West Bank using cultural activism to bear witness, raise awareness, and build alliances throughout Palestine and beyond. (photo: Ryan Rodrick Beiler/Activestills.org) 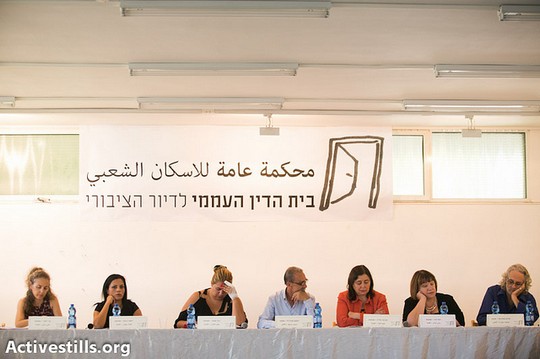 The opening event of the people’s court for public housing, in the city of Bat Yam, October 3, 2012. The forum for public housing will hold a public hearing against the Israeli state and public housing companies, hearing testimonies of victims of housing policy in Israel. (photo: Yotam Ronen/activestills.org) 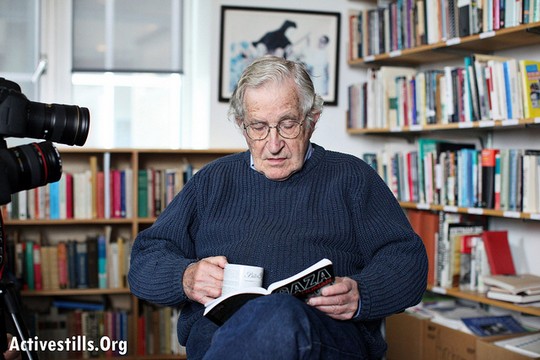 Prof. Noam Chomsky being filmed at his office at MIT in Cambridge, Massachusetts, during the production of “Stay Human: The Reading Movie” on October 3, 2012. “Stay Human: The Reading Movie,” films the reading of the book “GAZA: Stay Human,” a day-by-day account of the Israeli offensives against Gaza in 2009, written by Vittorio Arrigoni. Arrigoni was kidnapped and murdered in Gaza on April 2011. (photo: Tess Scheflan/ Activestills.org) 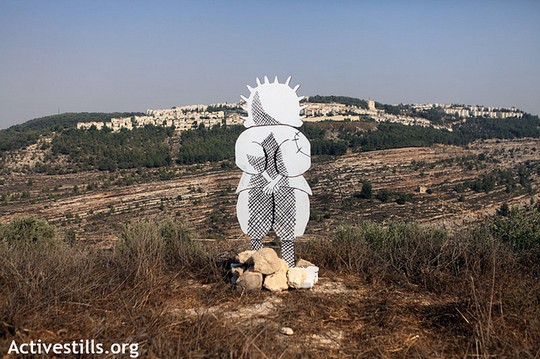 A wooden cut-out of a Handala figure, symbol of Palestinian refugee rights, stands on a hilltop in the West Bank village of Al Walaja facing the Israeli settlement Gilo, which is considered illegal under international law, September 28, 2012. The Handala was placed during a Freedom Bus event on a mountain top near the house of Omar Hajajlah’s family, which will soon be cut off from the village by the Israeli separation wall. The house’s only connection to the village will be by a tunnel, and the home will be completely surrounded by a fence. (photo: Anne Paq/Activestills.org)
Get Our Weekly Newsletter