The exact same talking points that were used to oppose the Iran deal before it was ever signed, are now being recycled in an attempt to show it has failed. Not so fast. 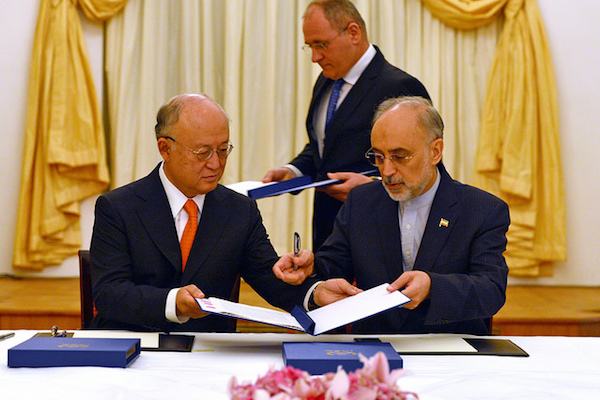 IAEA Director General Yukiya Amano and Vice President of the Islamic Republic of Iran Ali Akhbar Salehi at the signing of a roadmap for the clarification of past and present issues regarding Iran’s nuclear program in Vienna. Coburg Palace, Vienna, Austria, 14 July 2015. (Photo: Dean Calma / IAEA)

There is going to be a storm of hot takes to mark the upcoming anniversary of the Iran nuclear deal. And the first drops are already falling. The take that caught my eye at this early stage is a curtain-raiser exemplar of neoconservative thought a year after the accord. It comes our way in the pages of the Weekly Standard, authored by Michael Makovsky, the head of the neocon outfit, the Jewish Institute for National Security Affairs. Makovsky’s piece is worth looking at in detail because it succinctly rounds up so many points that we’re likely to see again and again from other hawks as the anniversary of the nuclear deal approaches and passes. Makovsky’s essay contains both the large and small flaws of the arguments against diplomacy with Iran. Few of the arguments are new. Opponents of talks with Iran used the same ones before talks even got underway.

Makovsky gives the immediate benefits of the nuclear deal a paragraph, with the technical specs summed up in a sentence. So far, so good. But Makovsky doesn’t like the Joint Comprehensive Plan of Action (JCPOA), so you know the other shoe is going to drop. And it does:

However, these are relatively temporary benefits. In seven years, Iran can begin R&D and production of advanced centrifuges that are 25 times faster than existing ones. And within 14 years, all meaningful restrictions on Iran’s nuclear program fall away, freeing it to pursue a robust nuclear weapons capability, legally and legitimately. The JCPOA doesn’t cut off Iran’s pathway to nuclear weapons, but paves it.

If that line about Iran’s path to a nuclear weapon being paved by the nuclear deal sounds familiar, it’s because right-wing Israeli Prime Minister Benjamin Netanyahu used the same line time and again even before the deal was signed. No surprises there: neocons opposing the Iran deal have long since been taking their cues from Netanyahu and his Likud party.

Then there’s that line, with my emphasis, about Iran being free to “pursue a robust nuclear weapons capability, legally and legitimately.” That’s just not true. Iran is still a signatory to the nuclear Non-Proliferation Treaty (NPT), which was ratified by Iran’s legislature, meaning it carries the force not only of international law but Iranian law as well. So, if Iran were to pursue nuclear weapons, it would be doing so illegally. This remains true with or without the Iran nuclear deal, and Makovsky pretending otherwise makes a joke of his argument. If this purported scholar were worried about little things like being honest—or correct—he might have simply said that Iran would be free to illegally pursue nuclear weapons and do so effectively because many of the restrictions had fallen away. But honesty and accuracy don’t exactly seem like high priorities here.

Next, Makovsky laments that he’s not getting enough information about Iran’s nuclear program. He complains that “Iran has been allowed to self-inspect suspicious facilities.” Kelsey Davenport, of the Arms Control Association, told me that “’self-inspection’ only took place once,” at Parchin, a site suspected to have been used for nuclear trigger testing in the early 2000s—and which has since been paved over. The site remains a focus of Washington hawks, but it’s not really relevant to Iran’s nuclear program going forward. Makovsky notes that reports from the International Atomic Energy Agency (IAEA) “now provide less information than before by which to judge Iran’s nuclear program.” Davenport says that this is “partially correct.” The public reports contain less and less detailed information—centrifuge and stockpile information isn’t made available. But, says Davenport, “the IAEA certainly knows more”—thanks to the heightened inspections regime imposed by the Iran nuclear deal. Moreover, in cases when Iran’s stockpiles surpass the limits set by the deal, the specifics are indeed made public. Makovsky should be able to judge that just fine, though I suspect his judgments will surprise no one. 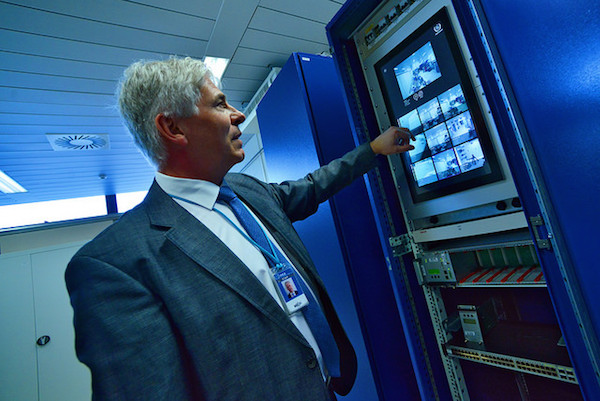 Makovsky is sure that the Iranian regime is growing more radical by the day, emboldened by the nuclear deal. He’s upset that Iran remains a hostile regime in general, citing statements by Iranian political elites proclaiming their anti-Americanism. Of course, Makovsky himself, not to mention a host of American, Israeli, and Saudi Arabian political elites, could be said to be bragging about their own anti-Iranianism, but never mind that.

The more salient point here is that no one promised that Iran would suddenly become a liberal Western democracy with the advent of the nuclear deal. Rather, the hope is that Iran’s radicalism will lessen over time as the economy improves and new trade opens up more links with other nations. (This is not a sure thing, but the path toward confrontation with Iran—one pushed relentlessly by neocons like Makovsky—hadn’t yielded a more moderate Iran either.) I’ve written before that the human rights situation in Iran is likely to get worse before it gets better. Reactionaries still control the security apparatus and the judiciary, not to mention the supreme leadership. This dynamic could well extend to Iran’s foreign policy. That Iran would suddenly start acting all Sweden was always a straw man—ironically one leveraged by both the deal’s overly sanguine boosters and ardent critics alike.

That Iran would continue to act in some circumstance as a bad actor, or at least a nuisance, shouldn’t surprise anyone. Ironically, many of the people who oppose the deal—and have done so since diplomacy got underway—also made a point of emphasizing that Iran’s nuclear program was the “greatest threat facing our world” (Netanyahu’s words). By reducing the threat from Iran’s nuclear program, the world didn’t resolve every issue with Iran’s regime, just the biggest one. Reforming Iran will be a much longer struggle than the few years of diplomacy it took to get the deal.

With Iran still not fully reformed, what, then, about the cash Iran gets thanks to the nuclear accord? In this case, too, neocons are making the perfect the enemy of the good—something they’ve done throughout the talks and the signing of the accord. Makovsky laments this “windfall”—though really this is Iran getting back its own money not a bag of cash dropped in its lap. However, he acknowledges that this sum is “perhaps not as much as critics feared.” That’s probably because critics, again taking cues from Netanyahu’s government, hauled out one misleading figure after another to quantify the benefits of the nuclear deal to Iran. Makovsky predicted that Iran would get $150 billion but acknowledges today it only got $30 billion. 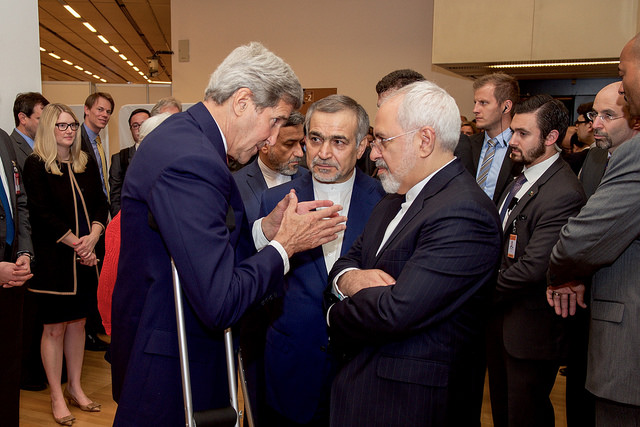 In this case, as with many arguments against the accord, many opponents of diplomacy with Iran constantly blathered on about how they just wanted a “better deal” when they actually wanted no deal at all. Makovsky himself has written about this unicorn of a better deal. There is no plausible scenario in which Iran would have accepted a deal to severely curtail its nuclear program without access to the funds frozen by sanctions.

After pooh-poohing Iran’s “windfall,” Makovsky gets into a huff about American credibility. As always, this line of argumentation is specious. Makovsky is especially upset on behalf of the Israelis: “By agreeing to the JCPOA, the United States abandoned its longstanding Israeli and Arab allies.” But of course this statement ignores that many in Israel’s security establishment—rather than its Likudnik political leadership—at least latently, if not explicitly, support the Iran deal. This applies even to some of Makovsky’s fellow right-wingers.

Makovsky also asserts that damaged U.S. credibility allowed Russia to become more deeply involved in Syria and also sell Iran surface-to-air missiles. He adds, “Reflecting this new reality, Israeli prime minister Benjamin Netanyahu, perhaps the most pro-American leader in the world, has met with [Vladimir] Putin in Moscow four times in the last year.” That’s right: Makovsky is blaming the United States for Netanyahu’s new coziness with Putin. Everything, you see, is Obama’s fault, and Netanyahu deserves blame for absolutely nothing.

Toward the end of his piece, Makovsky makes a stunning assertion: “There has been one very positive if unintended consequence: The Sunni Arabs have felt compelled to collaborate more closely with Israel and with one another.” So, Israel’s greater closeness to the retrograde dictatorships of the Gulf—illiberal and undemocratic to a degree that puts Iran to shame not to mention their occasional support for terrorism—is the only good thing about the nuclear deal. One would think that curtailing Iran’s nuclear program deserves some accolades, but apparently not.

Perhaps that’s because Makovsky never wanted a deal at all. He doesn’t support diplomacy and never did. Instead, he made his intentions clear in a 2012 talk at the United Kingdom’s leading neoconservative think-tank: “Now the only way to fully resolve the problem is regime change.” If that’s your line of thinking, there’s no deal—better or otherwise—to support. Makovsky and likeminded hawks have made absolutely clear that they oppose diplomacy not because of the consequences but because of diplomacy itself.

Ali Gharib is a New York-based journalist on U.S. foreign policy with a focus on the Middle East and Central Asia. This article was first published on Lobelog.com. It is reproduced here with permission.