A year after losing his parents and baby brother, six-year-old Ahmad Dawabshe returns to Duma for the first time. At court hearings for the accused murderers, settler youths taunt the remaining family members. A journey through an unimaginably painful year. 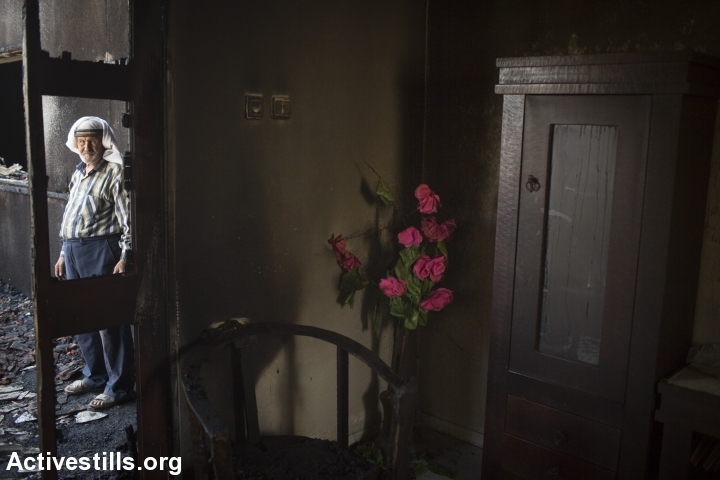 The Dawabshe grandfather stands in the charred home in which his family members were murdered by extremist Jewish settlers, Duma, West Bank, July 31, 2015. (Oren Ziv/Activestills.org)

“I know you spent a lot of time with the Dawabshe family in the hospital,” said the activist who called me last week. “I need your help.” It’s been a long time since I visited them, I told her.

Sunday marks one year since the tragic arson attack, and the images started flashing through my head: how I found myself heading to the ICU that cursed Friday alongside what remained of the Dawabshe family.

There was the military helicopter that landed at the hospital carrying Riham, the mother who was fighting for her life, little Ahmad, and Muhammad, the terrified young doctor who accompanied them.

There were the widely covered visits by Prime Minister Netanyahu and President Rivlin, members of Knesset and UN representatives.

There was the death of Sa’d, the father, after nine days in the hospital, and the soul-crushing period leading to the Riham’s final breaths, when she joined her husband and baby Ali.

There was the cemetery with the three fresh graves, one next to the other. 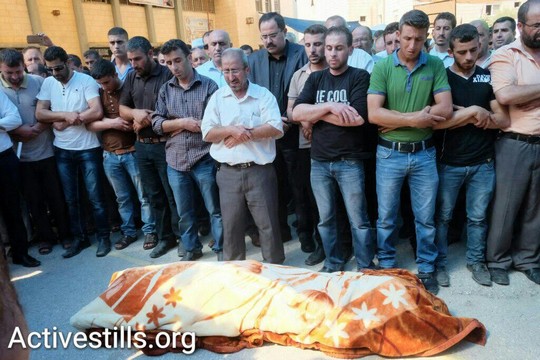 The images of Ahmad’s first smile in a room full of people and their tears flashed before my eyes. I remembered the endless surgeries and the amazing medical staff that treated him. And so many more images from that nightmarish mental album.

I suddenly remembered that I did not make it to Ahmad’s sixth birthday party. In an apologetic tone that didn’t even convince myself, I started to explain to the activist, a young woman from Ramle, how these days I was following Ahmad’s progress from afar.

She tried to ease the torments of my conscience: “Ahmad will be okay, inshallah, but we have a different problem — the settlers.”

“They show up every time there’s a court hearing [in the murder trial] and the [Dawabshe] family is forced to face them all by themselves,” she explained. “The grandfather, Abu Hassan, and the uncle up against the settlers who shout at and ridicule the family, agitate them, make gestures toward them.”

She asked me to help organize some sort of solidarity rally to support the family outside the courthouse. If enough people show up, she hoped, those there to support the murder suspects would give up and stop coming to harass the family each time.

Driving home later that day, I heard a report on the radio about the trial of Elor Azaria, the Israeli soldier who shot an already subdued Palestinian man in the head in Hebron. It was being covered on every station. They reported on the crowdfunding campaign that raised hundreds of thousands of shekels for his legal defense, the huge crowds that turned out to support him outside the military court, how the soldier’s father accused the country’s leadership of selling out his son, Avigdor Liberman vs Moshe Ya’alon. And on and on. 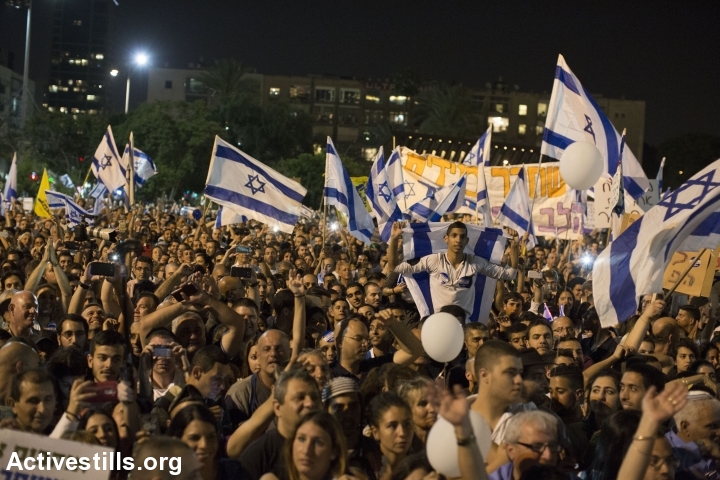 I couldn’t stop thinking about the concurrence of the two events: four murdered Palestinians, and the murder suspects are both receiving public support. True, the public support given to Elor Azaria is unprecedented in Israel, and the support for the Duma suspects is much more limited and lower profile. What bothered me is that every murderer in Israel receives support of some sort, somewhere, and the Palestinian victims’ families don’t even get entry permits to attend the court hearings.

Try and imagine yourself in their shoes. Somebody harmed the dearest person in your life and you don’t even have the right to be present in court. Or that the trial of your loved-one’s murderer is held in a language you don’t understand. Or that the trial is being held in a foreign country that lent a hand to the murderers themselves and you’re supposed to trust that its legal system will deliver you justice.

I suddenly understood that the Palestinians aren’t even a part of this equation. In the best case they are the scenery, the set of murder scene. Their voice is not heard and the Israeli discourse does not take them into consideration. The legal system in Israel serves Jews and it has its own limitations, one of which appears to be that the victims and their families do not have any rights if they are Palestinian. 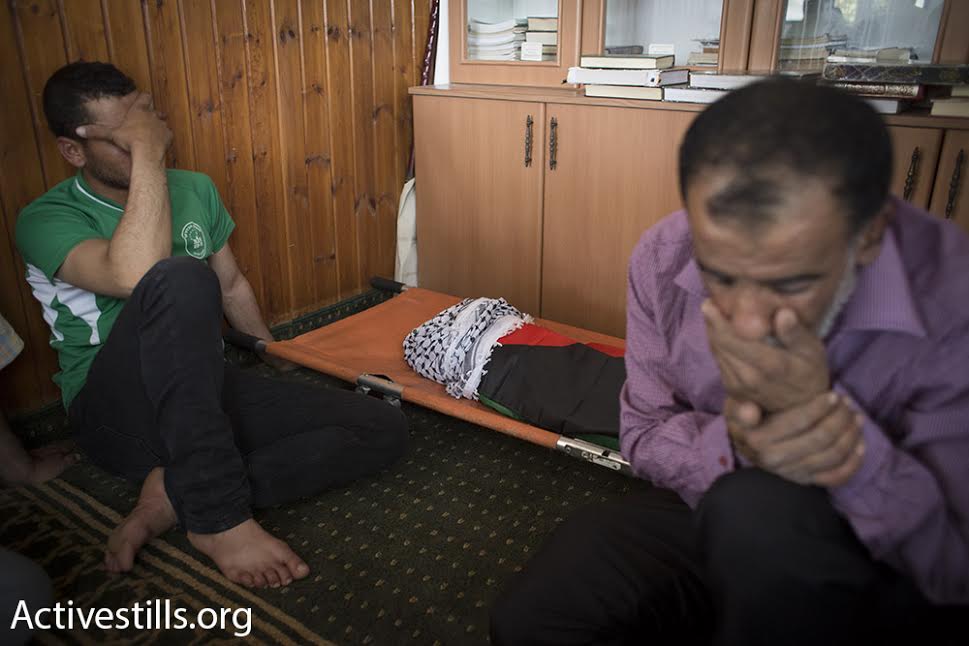 Relatives mourn the death of 18-month-old Ali Dawabshe, after he was killed in an arson attack by Jewish settlers, Duma, West Bank, July 31, 2015. (photo: Oren Ziv/Activestills.org)

Thursday morning, the day of the hearing, I arrive at the courthouse. Last time I stepped foot in this ugly building was after a woman’s murder in Lod. Every step I take toward it feels worse and worse. By the time I arrive a number of protesters are already there to support the family. Fifty or so Palestinian and Jewish supporters, and 10 or so members of the Dawabshe family. With the help of a number of activists, entry permits were arranged for them to come from Duma, in the West Bank.

They held signs and everyone stood in silence until somebody said, “Here they are. The settlers are coming.” A group of youngsters — some of them very young, with long, unkempt hair, long sidelocks, and dressed in raggedy clothes — was approaching. I’ve never met Jews like this in person. The tension in the air keeps increasing as they get closer but the activists in solidarity with the Dawabshe family decide to stand quietly and not pay them any mind.

The restraint lasts only until the settlers start provoking with celebrations of ridicule, among other things by making signs and gestures with their fingers. Three fingers raised provocatively — one for each of the Dawabshe family members who was murdered, with cries and gestures that “the fourth will come.”

One of the women there to support the family started yelling “Allahu Akbar” and the others repeated after her. A youngster from Duma read out slogans from his phone praising martyrs, in praise of young Ahmad, and “khaybar khaybar al Yahud.” I didn’t feel comfortable with the chants and slogans and another woman asked: “Why is that relevant? We’re here because we’re looking for justice.”

Another woman warned that the media would only show Arab women chanting “Allahu Akbar” and not what the settlers were doing. God is “greater” than this fraudulent justice, was the response, and the truth is that she was right. It’s hard to believe in a justice system in this sea of madness wherein the accused is acquitted and the victim becomes the accused. Maybe God is the only source of true justice.

The Arab protesters started looking for more appropriate slogans while the police pushed away the settlers, who looked like a rather small bunch compared to those who showed up to support the family. Two Jewish protesters, a man and a woman, politely asked me to explain what had happened. I did my best to explain the chants, and the internal discussion that led the Arab protesters to decide they weren’t appropriate then and there. Meanwhile, somebody started some chants in Hebrew and Arabic that everyone could get behind.

A human wall of police officers blocked the group of hilltop youth settlers and asked them to move even further away, at which point they started with the three fingers again. Each time one of them caught one of us looking at them they would raise their hand with three fingers extended and stick out their tongues. 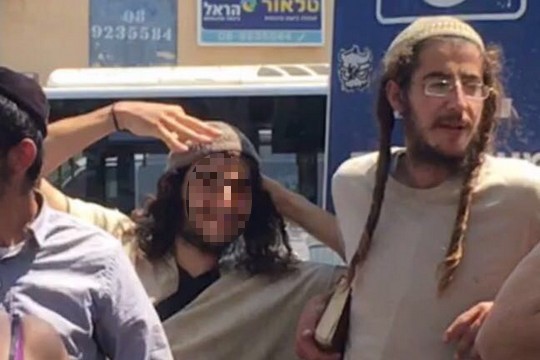 Young Israeli settlers make a three-finger gesture toward the Dawabshe family outside the court in Lod. (Hiyam Zabarka)

The court hearing ended. A couple of members of Knesset and the Dawabshe grandfather and uncle came out to the crowd. The media circled them. The court decided to keep the suspects in prison until the 4th of August and set dates for six more hearings in September, when the trial itself will begin, the grandfather explained. When he finished, I approached him.

We hadn’t seen each other for a long time. He told me that little Ahmad had recently visited the village, Duma, for the first time since the attack. They told him what happened that horrible night. He visited his burned home for the first time, a year later. Ahmad, who should be starting first grade, now tells people that his brother Ali is an angel and that he’s watching over his mother and father in heaven.

It is difficult to imagine how they broke all of that to Ahmad at once, how he reacted when he saw his charred home. I imagine a quiet child standing stunned among a group of embarrassed adults. Did he cry? Maybe he didn’t react?

He has spent the past year in the hospital and must have heard things here and there and pieced things together. He understands that he doesn’t have a family or a home and that his old life is not going to come back. That everything has changed.

Surely he understands that he has grandma and grandpa now, and sees lots of strangers around him, but who knows when little Ahmad will actually understand what happened that dark night in his family’s small home, and why it happened at all.

After a long and exhausting day I went home. I needed to figure out the young settlers’ finger gestures. I asked friends, searched the internet, and pretty soon somebody sent me to the ADL’s database of hate gestures. One friend reminded me that the Israeli media found all sorts of photos of Palestinians making similar gestures a couple of years ago, photos that were meant to support Muhammad Asaf — the Palestinian contestant in Arab Idol — and presented them as being in support of the kidnapping and murder of three Israeli teens. Three fingers for these settlers, it seems, is a victory sign of sorts over the triple murder in Duma.

Sunday marks one year since the deadly arson attack in Duma. Three innocent human beings were consumed by the flames of hatred that day. One small child’s world was changed forever. Ever since, we’ve been exposed to so much hatred and wickedness. The “Individuals Intifada” broke out, and the occupation has become even more violent and painful.

To mark one year since the attack, the Palestinian Authority organized a festival or sorts in Duma to commemorate the Dawabshe family. Instead of building a medical clinic or a fire station, the leaders chose to deliver speeches. The demon of racism and violence has escaped, is hovering over our heads, and we have yet to find a courageous enough hand that can stuff it back in the bottle, or the right finger to plug it closed for good.