Since entering negotiations with Palestinians last July, Israeli policies have only led to a deeper entrenchment of the occupation. Now, Abbas must listen to left-wing Palestinian parties and put an end to peace talks.

Dancing the tango with a cactus is a bad idea. Not only are you dancing by yourself, you’re also going to be pricked by the thorns.

But this is exactly what Mahmoud Abbas has been doing since last July, when he agreed that peace negotiations between the Palestinian Liberation Organization (PLO) and the Israeli government would be mediated by the U.S. government, knowing full well that the U.S. is not a neutral broker, but rather the main backer of the occupation.

And so, the negotiations continue – yet the Israeli government announces the building of 1,400 new housing units in the settlements. Meanwhile, the United States is satisfied with nothing more than a weak condemnation. 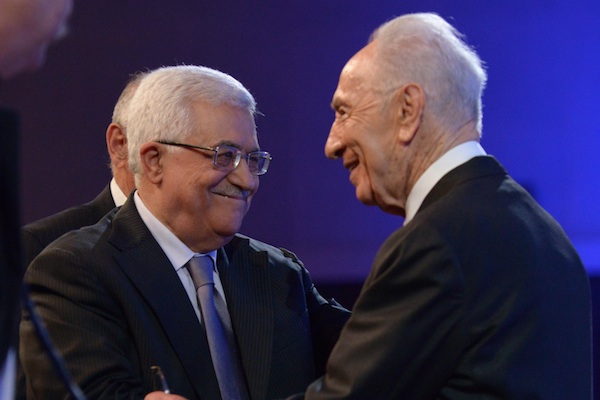 The negotiations continue – yet the Israeli government continues to Judaize East Jerusalem. Meanwhile, the United States expresses disdain, yet continues to turn a blind eye.

The negotiations continue – yet the goal of an independent Palestinian state drifts further away. Meanwhile, the United States is busy demanding Abbas become a Zionist and “recognize Israel as a Jewish state.”

In light of all this, it is no wonder that four Palestinian left-wing parties in the occupied territories rightfully called on Abbas to put an end to the negotiations. The Palestinian People’s Party (PPP), the Democratic Front for the Liberation of Palestine (DFLP), the Popular Front for the Liberation of Palestine (PFLP), and the Palestinian National Initiative published a joint statement calling on Abbas to withdraw from the talks with Israel, and apply for recognition by the United Nations instead.

According to the statement, “accepting the plan of Kerry to sign the framework peace deal is like committing a suicide, and this plan has many dangerous consequences on the Palestinian cause and our people’s legitimate rights.”

The Palestinian left has also been openly critical of the proposal made by Abbas in February, in which he proposed that an American-led NATO force would patrol a future Palestinian state indefinitely, with troops positioned throughout the territory, including Jerusalem. It is well known that NATO is not a peacekeeping force, but rather an aggressive military alliance, responsible for aggression against Serbia in the 90s, and more recently the intervention in Libya.

It is remarkable that although Abbas was willing to sacrifice the prospect of Palestinian national sovereignty by agreeing to become a de-facto U.S. protectorate, his concessions were not met with a more favorable attitude by Kerry. The U.S., however, did not budge an inch from its traditional position, which backs the policies of the Israeli occupation and places nearly all the demands on the Palestinians.

Abbas must decide between the way of Netanyahu and the U.S. State Department, and the way proposed by the left. And not just him. The Israeli left must also decide: does it support peace or the United States?

Uri Weltmann is a member of the Central Committee of the Communist Party of Israel, and teaches Mathematics at a technical college.