Drivers entering Jerusalem this week were greeted by an unusual message, which activists hope will jump-start a public discussion about the Israeli government’s treatment of refugees. 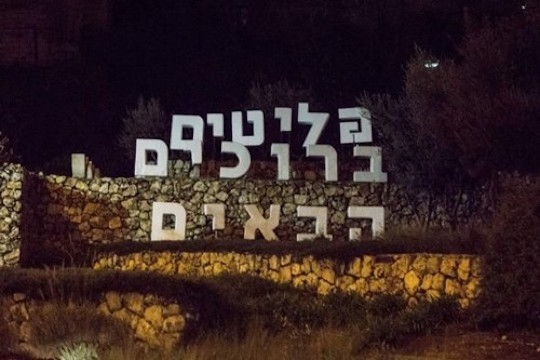 The sign at the entrance to Jerusalem, altered to read ‘Welcome, refugees’, December 1, 2015. (Courtesy photo)

A group of activists from Jerusalem altered the official sign at the entrance to the city this week so that anyone driving in saw an unusual message: “Welcome refugees.”

The addition of “refugees” was removed after a few hours.

“We felt like we had to do something for the wellbeing of asylum seekers,” the activists explained.

“Dozens of asylum seekers have been killed on Israel’s southern border in recent weeks,” the activists told +972’s Hebrew-language sister site, Local Call. “It’s hardly been mentioned in the Israeli media, and certainly not sympathetically.”

The issues of the refugees and especially those being killed is not the topic of any meaningful public discussion, the activists said. “Our action is driven the belief we can change that, that we must change that.”

The deaths on the Egyptian border were not the only factor driving the activists, however.

Israel’s desert detention facility for asylum seekers, Holot, is expected to reach full capacity for the first time, Haaretz reported this week. That’s 2,500 people being imprisoned for no crime, and without any semblance of due process.

“This is our struggle,” the activists added. “We cannot lend a hand to a situation in which human beings are losing their lives on our borders, thousands are being imprisoned and deported from our state as we completely disregard our own past. We cannot allow that to continue.”

The activists also noted that the Israeli government bears some responsibility for the instability in Africa due to its involvement in the arms industry and its diplomatic support for murderous regimes on the continent, and especially in Eritrea.

The slogan “Refugees Welcome” has been used prominently in solidarity and direct actions relating to refugees arriving in Europe.

“We want to say clearly and pronouncedly — in Jerusalem, in Israel, and everywhere: anyone who needs shelter, security or protection, ‘welcome’,” the activists wrote. “There must be a vibrant, creative and productive public discussion about how the government is treating asylum seekers in Israel.”

Shortly after a version of this article was first published in Hebrew on Local Call, the activists contacted me and asked to note that their action was in memory of Habtom Zarhoum, an Eritrean asylum seeker who was lynched at the scene of a terrorist attack in southern Israel several two months ago.

A Hebrew version of this article first appeared on Local Call. Read it here.