Jewish activists arrested for protesting against segregation in Hebron on day when national-religious Jews descend on the city to mark Abraham’s biblical purchase of the Cave of the Patriarchs. 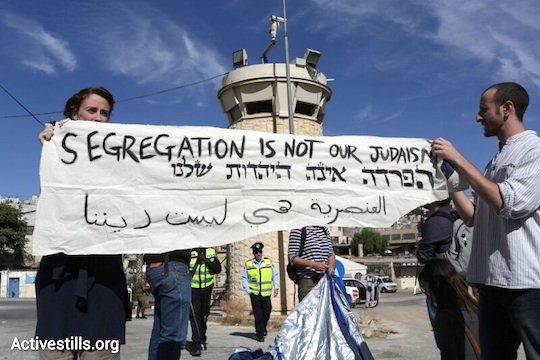 Israeli police arrested seven Jewish activists from Israel and the Diaspora in the segregated city of Hebron on Friday for holding signs that read, “Segregation is not our Judaism.”

The activists, from a group called All That’s Left, went to Hebron on the eve of Shabbat Chayei Sarah, which is when the Torah portion of the same name is read. Religious-nationalist Jews descend on Hebron over the weekend, to mark the text they believe to be proof that Jews own Hebron. (Full disclosure: I was involved in forming All That’s Left in early 2013, although never in its activism.)

More on segregation in Hebron

Even more than the rest of the year, during the Chayei Sarah weekend, the Israeli army restricts Palestinian movement in Hebron due to the influx of Jewish worshipers. This year, like years past, the army prevented Palestinians from holding Friday prayers at the Ibrahimi Mosque.

The activists arrived in Hebron late Friday morning with a tent and some signs. They said the intention was to erect the tent and hold an alternative study session of the Chayei Sarah text, challenging the nationalist assertions others draw from it. 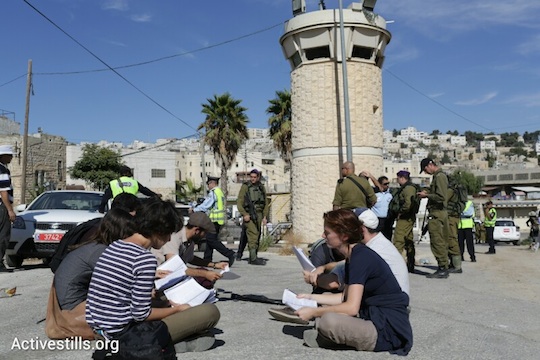 “The tent was to resemble Abraham’s Tent, which according to traditional Jewish exegesis was open on all four sides so that any passing stranger would know s/he was welcome,” a statement said.

Police never let them set up the tent and quickly destroyed their signs but allowed them to sit on Shuhada Street and discuss the text for nearly two hours. 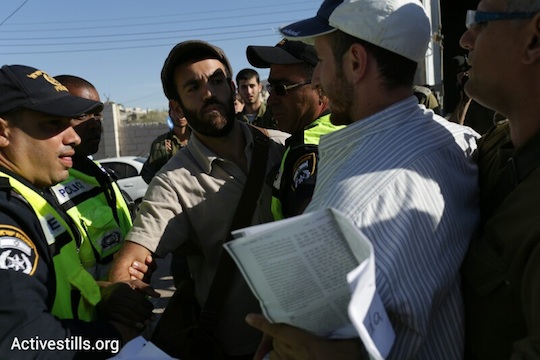 +972 has learned that Meretz chairwoman and MK Zahava Gal-On intervened on behalf of the protesters, demanding that police release them.

All That’s Left member Talia Krevsky, who was not at the action, said, “Our signs are a direct response to counter some of the appalling graffiti we have seen in and around Hebron, with images of Jewish stars alongside racist statements such as ‘Death to Arabs.’ That is not our Judaism.”

Shuhada Street, where the activists were arrested, has been segregated — open only to Jews and not Palestinians — since the 1994 Ibrahimi Mosque Massacre, when Jewish settler Baruch Goldstein killed 29 Palestinians and injured 125.

Update: All of the activists were released at around midnight and all charges dropped. 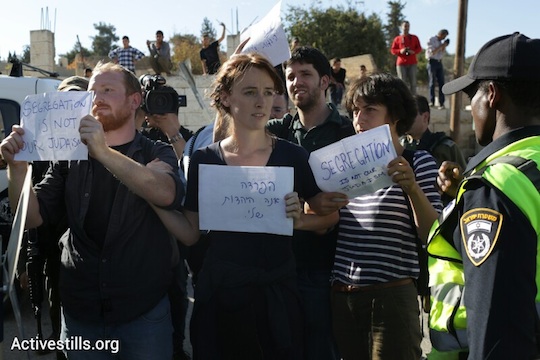