In the second such incident in three days, IDF soldiers are idle as settlers exert force and damage property on local Palestinian population in the West Bank. 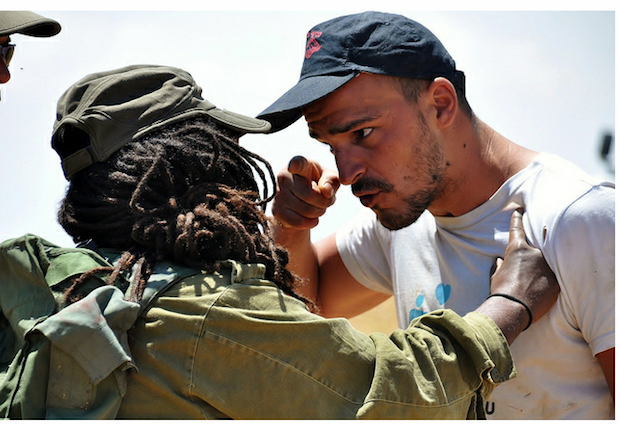 Soldiers did not bother to intervene on Monday when a very angry settler violently confronted Palestinians in the South Hebron Hills. Israeli Ta’ayush activists accompanied Palestinians to harvest their crops on the land of Bir el Eid, which is now adjacent to an illegal outpost called Mitzpeh Yair, home to some fanatic settlers I have had the displeasure of meeting.

First the soldiers arrived and, as they normally do in these parts of the West Bank (rural Area C, which is under full Israeli control, filled with Palestinian agriculture communities and surrounded by settlements), declared the area a “closed military zone,” which effectively prohibits the Palestinians from working their land. While waiting for the Civil Administration’s official authorization for this order, several settlers arrived at the scene.

In this video, filmed by Ta’ayush activist Ezra Nawi, the settler is seen flailing around a sickle he stole from Palestinian farmers and screaming, “Film me and I’ll kill you!”  He then steals a B’Tselem camera from Palestinians and smashes it to bits right in front of the soldiers, who are just kind of standing around and do nothing.

In this second video from the incident, the same settler is seen screaming at IDF soldiers, who are disingenuously trying to create some calm. The relevant parts are between minute 1:24 – 2:00,

After being alerted by a comment and watching the video several more times, the settler is shouting at the soldier “You have no authority” and later, points to the sky and says, “He is the authority” (referring to the Almighty, I presume). The soldier is the one who in fact shouts back to him: “I am the law!”

The settler in fact was not stopped or arrested, despite the fact that he broke the law. B’Tselem has filed a complaint with the Hebron police, citing assault, theft and damage of property, and has demanded the soldiers present identify the settler.  The soldiers have no excuse, as his face is clearly caught on tape.

As Yossi noted in his post, it is not the settlers who are the issue, but rather the IDF, which refuses to protect Palestinians from them.

Related:
It’s time for an international force in the West Bank
WATCH: Settlers shoot Palestinian in head while soldiers stand by