Militarism begins at conception? An ad for a maternity ward in one of Israel’s top hospitals depicts a fetus wearing a military beret and saluting. 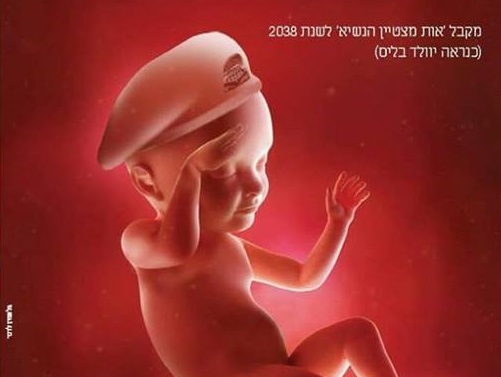 An advertisement for a maternity ward in one of Israel’s top hospitals, published in the right-wing newspaper Makor Rishon this past week, has been making the rounds on social media.

The ad for Lis Maternity Hospital, part of Ichilov Hospital in Tel Aviv, shows a fetus wearing a military beret, with a caption reading: “Recipient of the Presidential Award of Excellence, 2038.”

Portraying an unborn child as a soldier is disturbing in its own right, regardless of country. In Israel, an occupying power whose military has for over five decades been primarily concerned with maintaining control over a civilian population, this ad is even more charged and offensive. Furthermore, its timing is especially disturbing, considering that the IDF killed 60 Palestinians and wounded over 2,400 in a single day in Gaza, while continuing to exert control over millions of stateless Palestinians.

The notion that a good hospital will produce good soldiers is pathological. That a top hospital believes the best way to get women to choose their maternity ward is by convincing them their baby is destined to be a successful soldier in the Israel Defense Forces is also a genuine indication of just how militaristic Israeli society is. As if women don’t have enough on their minds as they approach birth, now they must be reminded that in 18 years, their child will be conscripted into the army. Regardless of their politics, Israeli mothers (and fathers) go through hell when their children — specifically their sons — serve in the army.

Israel, which consistently attacks Palestinian leadership and society for giving birth to “terrorists” and educating children to hate, seems to conveniently forget the deep militaristic, violent roots of its own society. This ad is just one indication of that.

Some Israelis on Facebook have expressed their disgust and outrage, demanding the hospital pull the ad. When asked for comment, Ichilov Hospital Spokesperson Avi Shushan wrote in an email: “This was a one time ad published in Makor Rishon.” He did not respond questions about those who were disturbed by the ad.

Update (Thursday, May 24, 7 p.m.):
Ichilov Hospital spokesperson Avi Shushan sent me another email about 12 hours after his initial response stating that due to the hospital’s “attentiveness to the feelings of the general public and following complaints, we have ordered the advertising firm to immediately take down the ad,” and apologized for any anguish caused. Upon time of publishing this update, the ad still appears online in the digital version of the print paper, but Shushan confirms that they have instructed the ad agency to take it down. The hospital received only a few complaints, he added.