The Israeli army is holding Anwar Makhtoob in administrative detention for two six-month-old Facebook posts. The military prosecutor admits there isn’t even a suspicion that he had committed a crime. 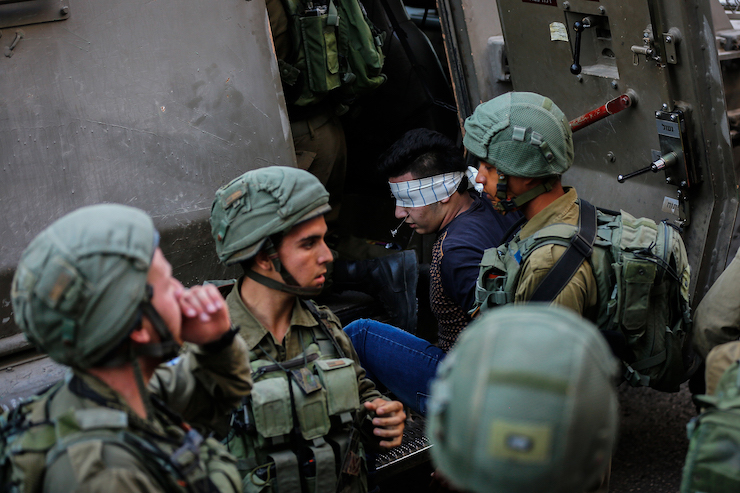 The Israeli army arrested Anwar Makhtoob, an 18-year-old Palestinian, over several old Facebook posts two weeks ago. The military prosecutor readily admitted that there wasn’t even a suspicion that he had committed a crime, but instead of releasing him, as one might expect, the prosecution and the judge decided to keep him in prison, so that he could be put in administrative detention.

On December 31, 2018, Mahktoob’s uncle and little brother were driving through an Israeli military checkpoint near their West Bank village of Al-Qubeiba. The Israeli officers there asked about Anwar, and then called his father and demanded that he bring the teenager to the checkpoint for questioning.

When the two arrived, the Border Police officer in charge asked Makhtoob about two photos he had published in July 2018, six months earlier: one, a photo of weapons, and the other, a keffiyeh-clad man in a flak jacket holding an assault rifle. According to Makhtoob’s attorney, Khalil Zaher, the teenager found the photos online and decided to share them.

After answering the Israeli officer’s questions, Makhtoob was released and sent home with his father. Two hours later, Makhtoob’s father received another phone call from the Israeli officer, who asked that he return with his son to the checkpoint in order to sign a few documents. After another round of questioning, they arrested Anwar.

The photos published by Anwar Makhtoob on his personal Facebook page.

Makhtoob was taken to the Israeli army’s Ofer military prison, where he remained until January 3, when he was finally brought before a military judge. The prosecutor asked the judge to extend his remand by 72 hours to give time for a senior IDF commander to issue an administrative detention order. Administrative detention is a practice Israel uses to hold Palestinians indefinitely without charge or trial on the basis of secret evidence, often in the absence of a crime.

The army prosecutor readily admitted to the judge that the photos Makhtoob published on Facebook did not constitute a crime, but that secret evidence handed over to the judge — which neither Makhtoob nor his lawyer were allowed to see — justified keeping him behind bars. Zaher demanded that the court bring charges against Makhtoob rather than hold him indefinitely without trial.

The judge, however, accepted the prosecution’s argument that the secret evidence was enough to keep him behind bars for the time being, and extended his remand by another three days. On January 7, a senior Israeli army officer ordered Makhtoob be held in administrative detention for six months. He has not been accused of committing a crime.

According to Israeli human rights organization B’Tselem, at the end of October 2018, there were 481 Palestinians — including two women and four minors — in administrative detention.

“If in the past the army would place Palestinians suspected of involvement in violence or armed groups in administrative detention, today the army is jailing completely normative teenagers — who have no political affiliation — without trial on the basis of all kinds of photos and posts on Facebook,” Zaher, the lawyer, told +972 Magazine. “It’s an easy way out rather than actually undertaking a proper investigation to see whether the teenagers in question committed a crime.”

+972 Magazine contacted the Israeli army spokesperson for explanations about why the teen wasn’t released when it became clear he had committed no crime and why the military thought this case was exceptional enough to hold him in administrative detention. They offered the following response:

Anwar Makhtoob was arrested on suspicion of participating in disturbances and throwing stones at Israeli targets, harming the security of the area, and trading in weapons. On January 6, 2019, after examining the evidence in the case, the OC Central Command signed a six-month administrative detention order.

Administrative detention is used only after reliable information is obtained indicating danger posed by the detainee to the security of the area, and is done under inspection, including judicial review conducted following detention.