As Israelis look for solutions to deal with some of the country’s growing economic and social problems, they could stand to sometimes take a few less lessons from America and a few more from Africa.

Finance ministers and bank officials from Africa and investing countries are heading to the Portuguese capital, Lisbon, for the annual gathering of the African Development Bank.

The international lending group’s two-day meeting begins on Thursday, but it was preceded by a forum focused on helping some of Africa’s less known ventures: entrepreneurs from the southern continent who have gathered in the Portuguese capital Lisbon to find new ideas among their colleagues and new markets among their neighbours.

They are CEOs, but of companies you’ve likely never heard of, invited to Portugal by the EMRC, a Brussels-based international association that serves as a network for people just like them … and brings their brains in direct contact with global financiers, consultants and officials.

A select group was asked to present their business plans before the gathering. Among them was Soumaïla Coulibali, whose Mali-based company Prosema promotes the development and marketing of sesame. In the last five years, it has exported nearly six-thousand tonnes to China, Turkey, Israel and Senegal. And Amande Sonde, whose telecoms business in Burkina Faso hopes to provide five million minutes of communications this year to the local population. He reveals, his passion stems from fond memories of his first ever phone call at age 6.

The EMRC awarded fifteen-thousand dollars cash to the most impressive proposal decided in part by audience applause. Five finalists, but there could be only one winner. 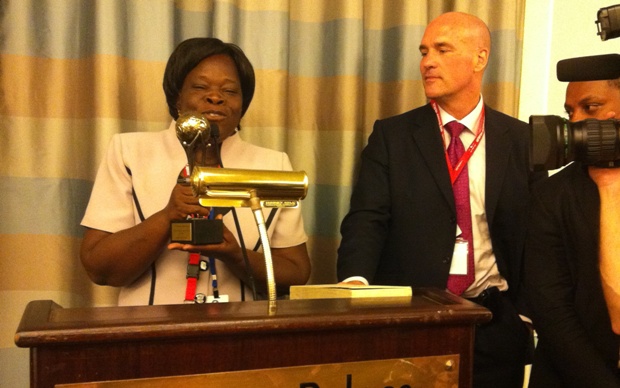 Suzanne Marie Belemtougri is a veterinarian-turned-managing director, whose company SOPHAVET raises guinea fowl and eggs as a culinary alternative to poultry. It has an annual operating budget of some one-million euros, though it rents most of its vital equipment. Belemtougri hopes to use the money to buy some of it instead.

“The EMRC allows us to develop a project and move ahead,” Belemtougri said upon winning the award. “It gives us the opportunity to grow and reach our objectives, helping farmers produce more. I’m thankful for what they’ve done for me, for my country, and for those who fight for Africa.””

Ventures like hers are known as SMEs – small-to-medium enterprises. They can make up as much as 70-80 percent of Africa’s economies and are crucial in generating jobs.  Organizers say overlooking them is a mistake, and one of the key factors holding back the African continent’s development.

Global development groups say support of SMEs and their unique role in societies is crucial. “In the developed world, interestingly, it’s not the size of the companies that seems to matter most, but the rate at which they grow,” says Pedro Conceicao, Director of UNDP Office of Devemopment Studies. “In other words, the companies that create more jobs are those that grow faster. But in Africa, the evidence seems to suggest that with small and medium enterprises – the size of the company is critical to stimulate jobs.”

The EMRC forum is called “the Missing Middle”. It focuses on those whose borrowing needs fall in between micro-finance options and more traditional lending institutions. It is a precursor to the annual summit of the African Development Bank, which begins on Thursday here in Lisbon. And some say: it sends a clear message to the bank: focus less on Africa’s governments, and more on the people they govern.

When I was living in Mexico City, I remember being fascinated by some of the small scale entrepreneurship I witnessed, from the vendor selling chopped-up fruit at his corner stand, to the drive-way kitchen selling gourmet lunches.  I also remember a Mexican friend of mine telling me that in Mexico everyone has the initiative to start (including my friend, who recently launched a fitness program), but few have the desire to go beyond the first steps … because they were not institutionally raised with the same business drive as the Americans to the North.

Essentially what he was saying was that if the Mexican has one successful shop from which he earns enough money to live off of and to feed his family, he’s unlikely to naturally think to expand.  He will rarely consider hiring someone to replace him while he opens up a second shop, or taking out a loan against his first shop’s success to support any such expansion.  (This is not to say that it is not done, I should qualify, but rather than it is not the institutionalized way of thinking.)  In the U.S. by contrast, the “small business owner” dream of millions of Americans is what keeps the economy going.  American Presidents, particularly when campaigning for re-election, love to talk about what they have done for one man’s little packing company in Tulsa, Oklahama, or one woman’s chain of comsetic shops in Indiana.  For one, it makes them sound like they are in touch with America’s emerging entrepreneurial class.  But two, it speaks to the memories that Americans have from early childhood: that, like homeownership, business-ownership is the American dream.

To promote this end, the U.S. has over the years put in place a large infrastructure of governmental and non-government bodies aimed at providing small business support, including tax tips, loan guidance and management training.  However, unlike the developing world, the goal here is to grow — the bigger you are and the more you earn, the more successful you have been.  This would be in line with American values that focus on individualism.  And of course, the government promotes this system because it creates tax revenues and establish stable households.

But in much of the developing world, not only are the resources not there — as I have noted above — but neither is the cultivation of what we in the West consider a natural human drive.  For most people, it’s not about getting a business from A to Z.  People are not creating companies with their eye on exit strategies.  They are thinking about getting from A to B, and then maintaining B.  To me, that’s fascinating in the context of what  Conceicao says.  These people are generating jobs and then maintaining jobs, mostly for people who simply cannot afford NOT to work (meaning, they will literally die).  They are not trying to get rich on the backs of others — they are trying to survive, and to help others do the same.  Calling them “middle class” once they establish some sort of consistent income does not do justice to the predicaments in which they find themselves: they now have enough cash to buy the things they need, but perhaps not the things they want (if they even know to want them in the first place.)

In Israel, you have a growing disparity among the country’s wealth classes.  The government attempts to provide some of the same resources seen in the U.S. but to a population that is not necessarily ingrained to use them.  Yes, Israel is among the world’s leaders in start-ups, but that most often than not reflects a drive that is instilled in the home, not necessarily in the schools or in public debate.  And like in the U.S., the end goal is not to make Israel a better, more stable place, but to make the entrepreneur a richer man or woman.

This is not the first time Israel’s old world socialism has morphed into new world capitalism.  Rather it serves as another example and another reminder.  As Israelis look for solutions to deal with some of the country’s growing economic and social problems, they could stand to sometimes take a few less lessons from America and a few more from Africa.