NEW YORK — After more than a week of controversy, including an editorial in the New York Times and a statement from Mayor Bloomberg, Brooklyn College hosted a discussion of BDS with Judith Butler and Omar Barghouti and nothing happened. That fact alone seems worthy of a story these days.

In a post for +972, Mairav Zonszein wrote eloquently about the outrageous attempts to intimidate the college into canceling the event. Alan Dershowitz started the whole controversy, but New York City public officials were quick to follow, with several threatening to cut the college’s funding. The New York Times published an editorial of quiet dismay, noting that “critics have used heated language to denigrate the speakers,” adding, “The sad truth is that there is more honest discussion about American-Israeli policy in Israel than in this country. Too often in the United States, supporting Israel has come to mean meeting narrow ideological litmus tests.”

Mayor Bloomberg expressed himself a bit more bluntly. “If you want to go to a university where the government decides what kind of subjects are fit for discussion,” he said, “I suggest you apply to a school in North Korea.”

And after all that, the event turned out to be a non-event. An audience of about 300 people sat quietly and listened to Judith Butler and Omar Barghouti speak, which they did — without interruption. People lined up quietly to ask questions at the microphone during the Q&A. As always, there were a few eccentrics who made statements, usually of the UFO variety, instead of asking questions. There was some post-panel schmoozing in another room, with books for sale laid out on a table and Omar Barghouti sitting behind another table to sign his tome on BDS.

And then everyone went home.

There were no heated arguments and no disturbances. The atmosphere was relaxed and friendly. No-one shouted “death to Israel”or anything remotely similar — except a contingent of Neturei Karta, who always show up at this type of Palestine-related event. 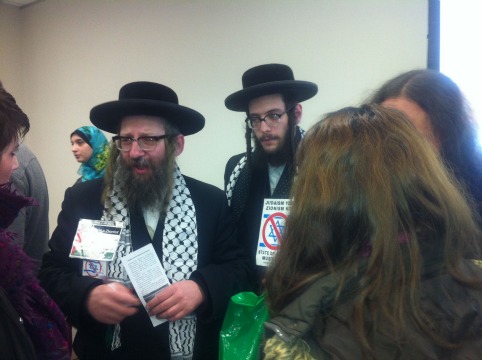 I’m always a bit disturbed to see BDS advocates, who talk about Palestinian rights in the same breath as LGBT rights and feminism, rush to photograph and be photographed with these men, whose beliefs and lifestyle tolerate neither homosexuality nor women’s rights. Anyway, they were the only ones shouting that Israel must end, it had no right to exist, etc.

Outside the student building there was also a small group of young Orthodox men, accompanied by New York State Assemblyman Dov Hikind, who was particularly involved in trying to intimidate Brooklyn College into canceling the event. One man, who wore the black fedora of an Orthodox Jew, handed me a photocopied page titled WHY BDS IS THE SAME AS AL QAEDA. On Facebook, someone posted a photograph of a page distributed at the college by a group calling itself Mobilization for Israel. EMERGENCY RALLY AGAINST HAMAS SPEECH, it announces. 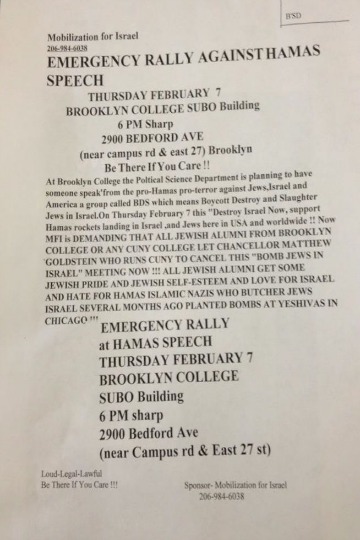 Flier handed out at Brooklyn College

But despite all the semi-coherent drama of the flier, only a handful of protestors showed up. They did not try to stop anyone from entering the student building where the event was held, nor did they try to enter themselves. Up on the sixth floor I could hear them outside on the street, faintly. They sang “David, Melekh Yisrael,” (David, King of Israel) and shouted a few semi-audible slogans for the first part of Judith Butler’s talk. But soon they dispersed and there was no sign of them when we came out.

But the college and the city clearly anticipated trouble. There was a heavy police presence, both uniformed and plainclothes officers, outside the student building and inside. They were supplemented by uniformed college security and volunteer marshalls who kept the sidewalk clear, checked IDs and made sure all the people queued up for the event were on the list. Everyone had to submit to a bag search and go through a metal detector. The metal buckles on my boots beeped, earning me a pat down. It would have felt just like being back at home in Israel, except it was freezing cold outside and everyone was remarkably courteous — friendly, even.

According to an email I received yesterday, the event was filled to capacity — but there were at least 20 empty seats, possibly because the speakers started exactly on time, while the people who had been waitlisted were still going through security. No-one was admitted during the talks, to avoid causing a disturbance.

The audience was a mixed bag of the usual suspects. There were political activists, many of them Jewish “red diaper baby” types. There was also a very heavy Arab Muslim presence, noticeable because many of the women wore the hijab. And journalists, of course.

I was impressed by Judith Butler’s remarks, in which she touched on issues of free speech, BDS as a nonviolent civil society movement, the definition of anti-Semitism,  and Jewish identity — all in her inimitably dense, intellectual and erudite style. You can read the text of her talk on The Nation’s website. Below is an excerpt:

One could be for the BDS movement as the only credible non-violent mode of resisting the injustices committed by the state of Israel without falling into the football lingo of being “pro” Palestine and “anti” Israel. This language is reductive, if not embarrassing. One might reasonably and passionately be concerned for all the inhabitants of that land, and simply maintain that the future for any peaceful, democratic solution for that region will become thinkable through the dismantling of the occupation, through enacting the equal rights of Palestinian minorities and finding just and plausible ways for the rights of refugees to be honored. If one holds out for these three aims in political life, then one is not simply living within the logic of the “pro” and the “anti”, but trying to fathom the conditions for a “we”, a plural existence grounded in equality.

Barghouti’s speech was less intellectual and more populist. I did not like it, not because I disagreed with anything he said, but because I dislike populism and am suspicious of speakers who rely on their charm to ingratiate themselves with audiences. He read out a long laundry list of Israel’s evil deeds (none of which I dispute), followed by a lengthy explanation of why he was not anti-Semitic, with liberal quotes from Yeshayahu Leibowitz, Shulamit Aloni and Avraham Burg, amongst others. He also gave a shout-out to Israeli Jewish partners of BDS, specifically the Boycott from Within movement.  The audience responded positively.

This event at Brooklyn College should have been a minor one. If the subject of discussion had been anything but Palestine-Israel, there would have been a very small audience indeed. Not many people are willing to take a subway to the last stop on the 2 line on a cold February night in order to sit for more than two hours on uncomfortable folding plastic chairs in a bare room lit by fluorescent strip lighting. But thanks to people like Alan Dershowitz and Dov Hikind, they came out in pretty impressive numbers. The minor event became a big deal.

Besides the deeply shameful attempts of Dershowitz, Hikind, et al to limit freedom of expression in a liberal democracy, I am pondering a few other things as I write this post. Despite all the publicity, only a very small group of hardcore Orthodox Jewish men — yeshiva boy types — showed up to protest this event. And they did not last long. Also, it is very interesting to see how the hardcore “My Israel right or wrong” types in the Jewish community have split off from the liberal, Obama-supporting majority of the Jewish community. The latter are uncomfortable with strong criticism of Israel, with many seeing BDS as an ideologically suspect movement, but there is no way they will come out to demonstrate against academic freedom and free speech.

So we had a Jewish mayor making a strong statement in support of academic freedom and free expression; we had a Jewish philosopher, Judith Butler, speaking in support of BDS and freedom of expression; we had a certain Jewish Harvard professor who equates any criticism of Israel with anti-Semitism; we had some marginalized hasidic Jews who hate Israel  and want it to cease existing; and we had a handful of yeshiva boys who actually believe BDS is the same as Hamas, which is a reincarnation of Nazism, and who equate unquestioning support of Israel with love of God and Torah. Which is so beyond absurd that I can’t even think of an adjective. Sorry.

Often, I feel as though the whole Palestine issue is more about the divisions within the Jewish community than about actual Palestinians.