An unexpected bright spot in south Tel Aviv yesterday, less than a week after the race riots: Israelis celebrated Shavuot with the children of African asylum seekers in Levinsky Park, the public space next to the Central Bus Station that has become a hub for the migrant community.

As I have done countless times over the past four years that I have been covering and researching migrant workers and African asylum seekers in Israel, I spent most of yesterday hanging out in south Tel Aviv, conducting man-on-the-street interviews. After last week’s race riots, the mood in the area is dark, tense, pessimistic. While our conversations took place in public, a number of Africans told me that they are scared “even right now.” These were grown men who were frightened for their physical safety on busy streets in broad daylight.

So I was moved to see a couple of bright spots in the area. The Garden Library–the initiative of local NGOs, including Mesila–was up and running yesterday. Asylum seekers and migrant workers were perusing the books while Israeli volunteers played with African and Filipino children.

In the grass to the side of the Garden Library, a small group of Jewish Israelis and the children of African asylum seekers marked Shavuot by reading the Book of Ruth together in Hebrew. 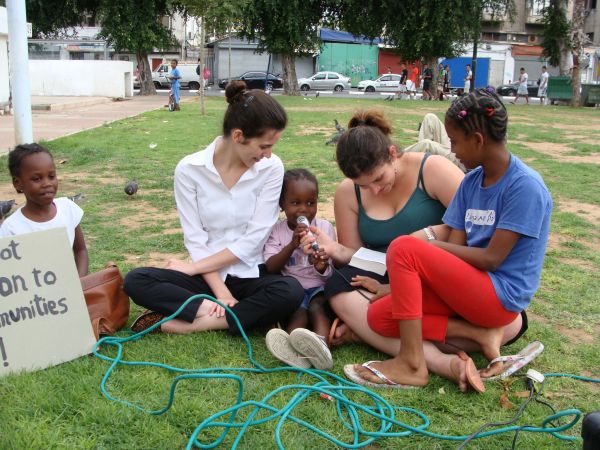 Jewish Israelis and the children of African asylum seekers celebrate Shavuot in Levinsky Park by reading the Book of Ruth. When the older girl on the right hit a bump in her reading, a volunteer helped her sound out the word. (photo: Mya Guarnieri) This sign reminds that while racism and xenophobia are huge problems in Israel society, there are some Jewish Israelis who oppose hatred of foreigners (photo: Mya Guarnieri)

The scene was especially moving to me because, as Yuval Ben-Ami points out in his excellent post about the holiday, Ruth was a foreigner. During Sukkot and Pesach we remember that we, too, were strangers in strange lands. And the Torah commands us to care for the strangers among us.

While yesterday’s Shavuot celebration does not mitigate or whitewash the country’s deep-seated racism–and, unfortunately, xenophobia seems to be the prevailing sentiment in Israel–we cannot forget that there are Jewish Israelis who are caring for foreigners, in ways large and small.