LGBTQ activists hang banners and graffiti anti-occupation slogans across Tel Aviv in the run-up to the city’s annual pride parade. 180,000 people are expected to take part in the festivities, at least half of them tourists. 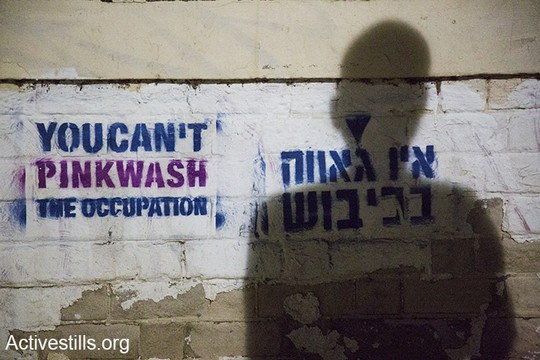 In the run up to Friday’s Tel Aviv Pride festivities, Israeli LGBTQ activists hung banners and spray-painted anti-occupation graffiti across the city. The signs, which read “Occupation: Israeli Pride” and “You cannot pinkwash the occupation” were hung from bridges at the main entrances to the city. Meanwhile activists graffitied slogans such as “You can’t pink wash occupation” in both Hebrew and English in dozens of locations.

The activists behind the action hope that the slogans catch the attention of at least some of the LGBTQ community and their supporters who are arriving in Tel Aviv to take part in the festivities.

The banners and graffiti are part of a week-long campaign by queer activists to raise awareness of the occupation, and the ways in which the Israeli government uses tolerance toward the LGBTQ community to divert attention from its human rights abuses.

Earlier last week queer activists published a response to this year’s official Pride music video, “Pink,” which was produced in tandem with the Tel Aviv municipality and includes the controversial artist “Shefita,” who does a Arabic-inflected cover version of the famous Aerosmith song. The women who dance alongside Shefita in the original video are replaced with images of home demolitions, aerial bombings, checkpoints, dead Palestinians, and the suppression of nonviolent demonstrations in the occupied territories.

According to the municipality’s website 180,000 people are expected to take part in the parade, at least half of them tourists.

Pride parades began taking place globally following the 1969 Stonewall riots in New York City, as an attempt at connecting different queer communities for a joint struggle for equal rights. In Tel Aviv, however, the parade has become a professional public relations campaign produced by the municipality and with the full cooperation of Israeli LGBTQ groups.

The truth is that the tourists who come to Tel Aviv won’t see images of Palestinians or the violence that has become part of our everyday life here on the posters put up by the Tourism Ministry. They won’t see the siege and destruction in Gaza, the thousands of Palestinian prisoners, the soldiers who come home with PTSD, or all the families who have paid and continue paying the price. 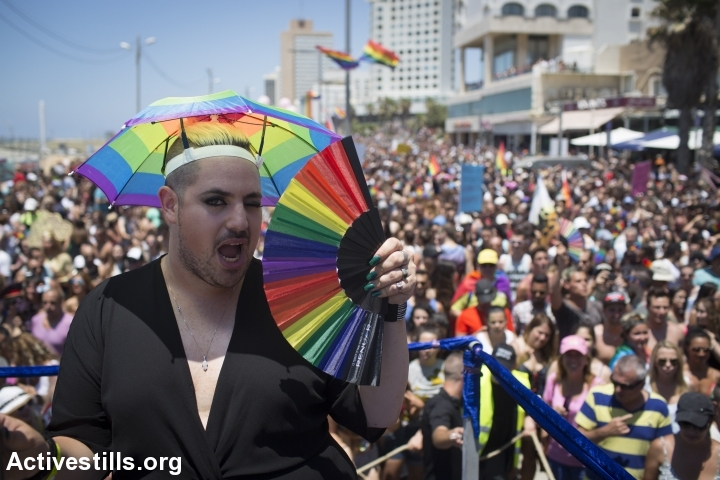 The colorful pamphlets handed out during the parade won’t include statistics on queer Palestinians from the occupied territories, who are barred from seeking asylum in Israel. The tourists won’t see anything about the murder at the Bar Noar LGBTQ center or the embarrassing way with which the police handled the case. They won’t see images from the “march of the beasts,” put on by Bezalel Smotrich, a member of Knesset who belongs to a party that is part of the coalition. Nor will they see Benzi Gopstein, a far-right activist who has yet to be investigated by police despite his incitement against the LGBTQ community prior to last year’s Jerusalem Pride Parade, where 16-year-old Shira Banki was murdered.

They also won’t hear about the fact that Unit 8200, one of the most elite unites in the Israeli army, reveals the sexual preferences of Palestinians in the occupied territories in order to blackmail them and recruit them as collaborators. This is our reality — this is what the most gay-friendly country in the Middle East does on a daily basis. 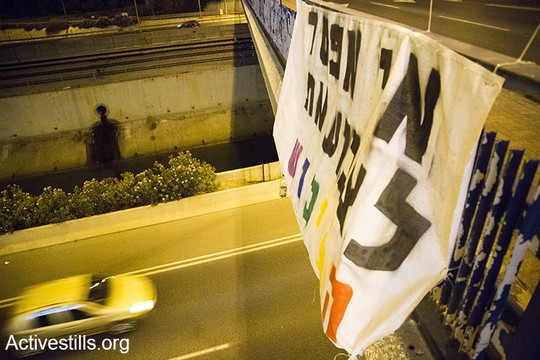 The LGBTQ community must not remain silent. It must not be used as fig leaf to maintain Israel’s image of normalcy, while in our name people are being blackmailed over their sexual orientation, while we live in a situation that is anything but “normal.”

It is not that the march is not important. It’s not that we cannot rejoice because of the occupation, or that we must first wait for the occupation to end before we struggle for our rights. On the contrary, as long as there is a single person who is afraid of coming out of the closet, a single trans woman who is shunned by her family, as long as we are incited against, as long as we cannot get legally married here — we must continue marching. But we must not forget that beyond the wall there are other children, women, queers, people who are directly influenced by what happens here. Because while we are dancing in the streets, in the occupied territories Palestinians are marking 49 years since the beginning of military rule.