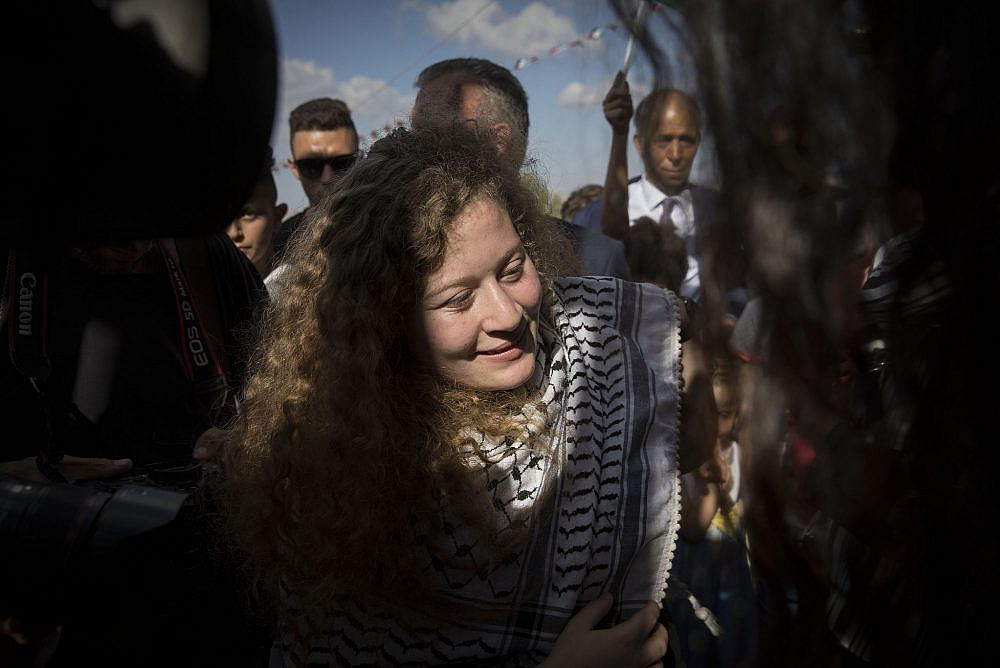 Palestinian youth Ahed Tamimi and her mother, Nariman, are welcomed by family and friends in their village, Nabi Saleh, following their release from an Israeli prison after an eight-month sentence, July 29, 2018. (Oren Ziv/Activestills)

One girl can, apparently, present so great a threat to a state that it feels the need to send hordes of soldiers — night after night — to invade her family’s home, deploy all means to scare and humiliate her, and eventually incarcerate and degrade her for months. Such menace had she brought to this state that, in December 2017, the armed soldiers who arrested this “threatening” girl, took selfies with her, doled out cruel profanities, and treated her as “their prize catch of the day.”

This was not the first time that Palestinian activist Ahed Tamimi, who was just 16 when she was detained, had encountered such treatment. Her family is renowned for spearheading weekly nonviolent protests against Israel’s military occupation in their village of Nabi Saleh in the occupied West Bank, drawing Palestinians and allies from all over the world to participate in the face of the Israeli army’s repression. Before Ahed was arrested, her brother, too, had been arrested twice, her father nine times, and her mother five times and shot in the leg once.

In her new memoir “They Called Me a Lioness,” Tamimi — together with her co-author, Palestinian-American journalist and producer Dena Takruri — recount how her slapping of an Israeli soldier who had intruded into her family’s front yard was decried by Israeli politicians, the media, and the public as an act of “terrorism.” “In a state that controls every aspect of my life, I have become the object of widespread enmity,” she writes in her introduction. With this and other stories, Tamimi and Takruri have written an accessible book that is both deliberative and didactic, setting out to explain the institutionalization of a violent apartheid regime by juxtaposing national history with personal anecdotes.

Through emotional and expository writing, the authors show us how history is and has always been deeply political and personal. They aim to communicate with a target audience that does not necessarily know much about the historical or sociopolitical context of Palestine, but is keen to learn more — especially those who have learned about Tamimi only through international headlines, while missing the larger context behind her actions and the media’s obsessive fixation with her. 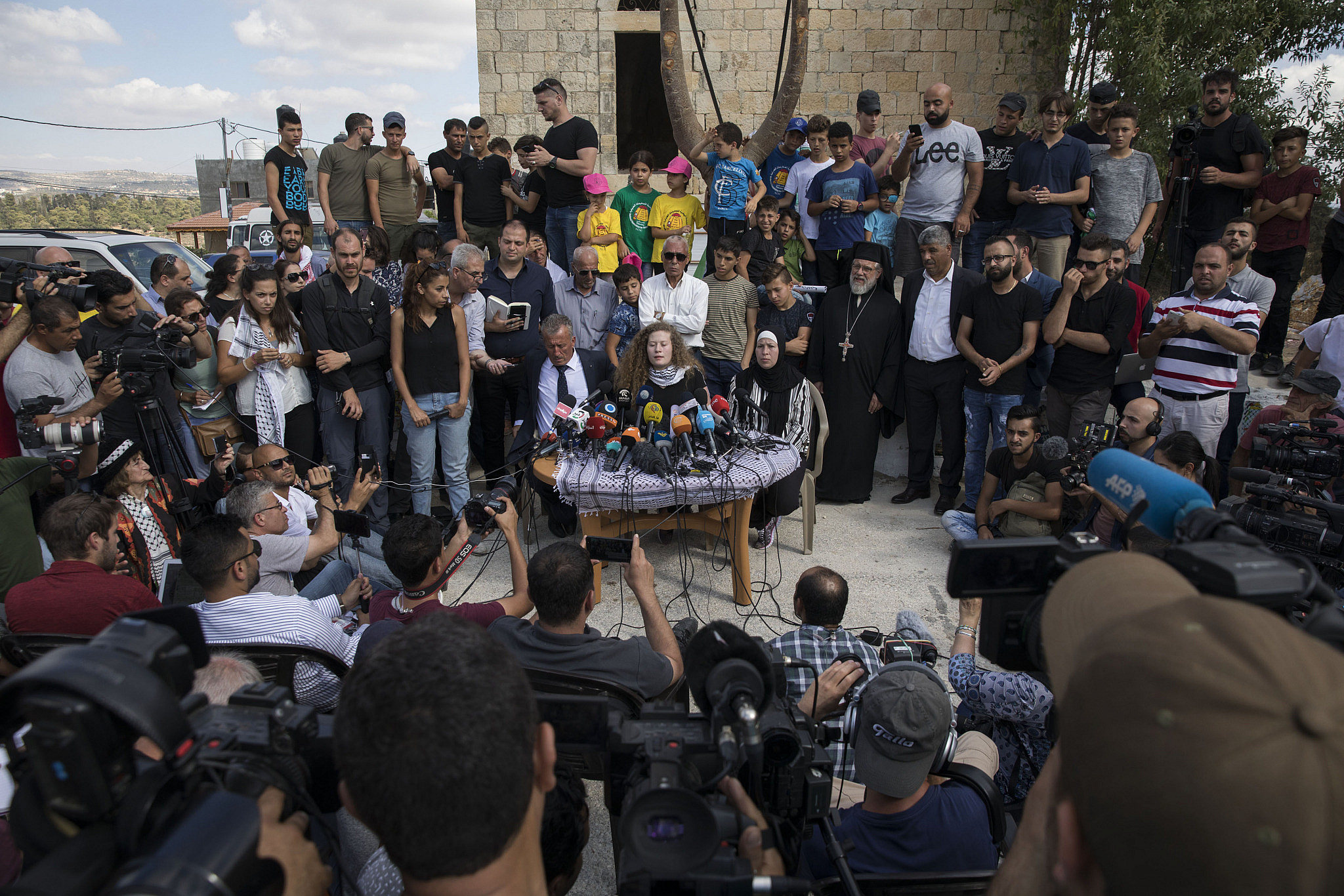 Palestinian youth activist Ahed Tamimi and her family hold a press conference in their home village of Nabi Saleh, following their release from an Israeli prison after an eight-month sentence, July 29, 2018. (Oren Ziv/Activestills)

“They Called Me a Lioness” therefore presents a narrative that was not wholly or truthfully covered by the press, showing a side of Tamimi most of us would otherwise not have seen: a reserved young girl, protective of her siblings, and rebellious toward curfews and studying, like any other child.

But Tamimi’s circumstances are far from ordinary. In emphasizing the sickly, cyclical nature of childhood under the boot of occupation, Tamimi illustrates the extent to which Israeli military violence has been normalized in Palestinian society, and to which the resulting trauma bleeds into children’s daily lives, including her own.

A stark example raised in the book is a game the children of Nabi Saleh most loved playing, called “Jaysh o Arab,” or “Army and Arabs.” The children split into two groups, Israeli soldiers and Palestinians, and the latter divide up into medics, journalists, and protesters. They then role play with the “soldiers” attacking the Palestinians, the protesters throwing stones at the soldiers, medics tending to the wounded, and journalists interviewing the protesters. Getting “arrested” means you’re disqualified from the game, and getting killed means you’ve been “martyred” and similarly kicked out of the game.

Tamimi recounts how they would often play this for hours a day, alongside “Bayt byoot,” or “House,” where they’d role play members of a traditional nuclear family. One game reflects the compulsion to accept violence as routine and resistance as involuntary; the other, as Tamimi describes, “expressed our dreams of a normal life.”

Indeed, the word “normal” is stripped of all meaning by the stories in this book, devoid of the safety and stability the word usually connotes. Describing the small fence in front of the home of her cousin Janna and uncle Bilal, decorated with dozens of empty tear gas canisters, Tamimi talks about how she and her community devise ways to create a new normal “rather than feeling like defeated victims… [by] collecting and repurposing these relics of war.” She goes on: “We strive to create life out of death, and we’ll continue to find beauty even in the ugliest parts of our lives.” 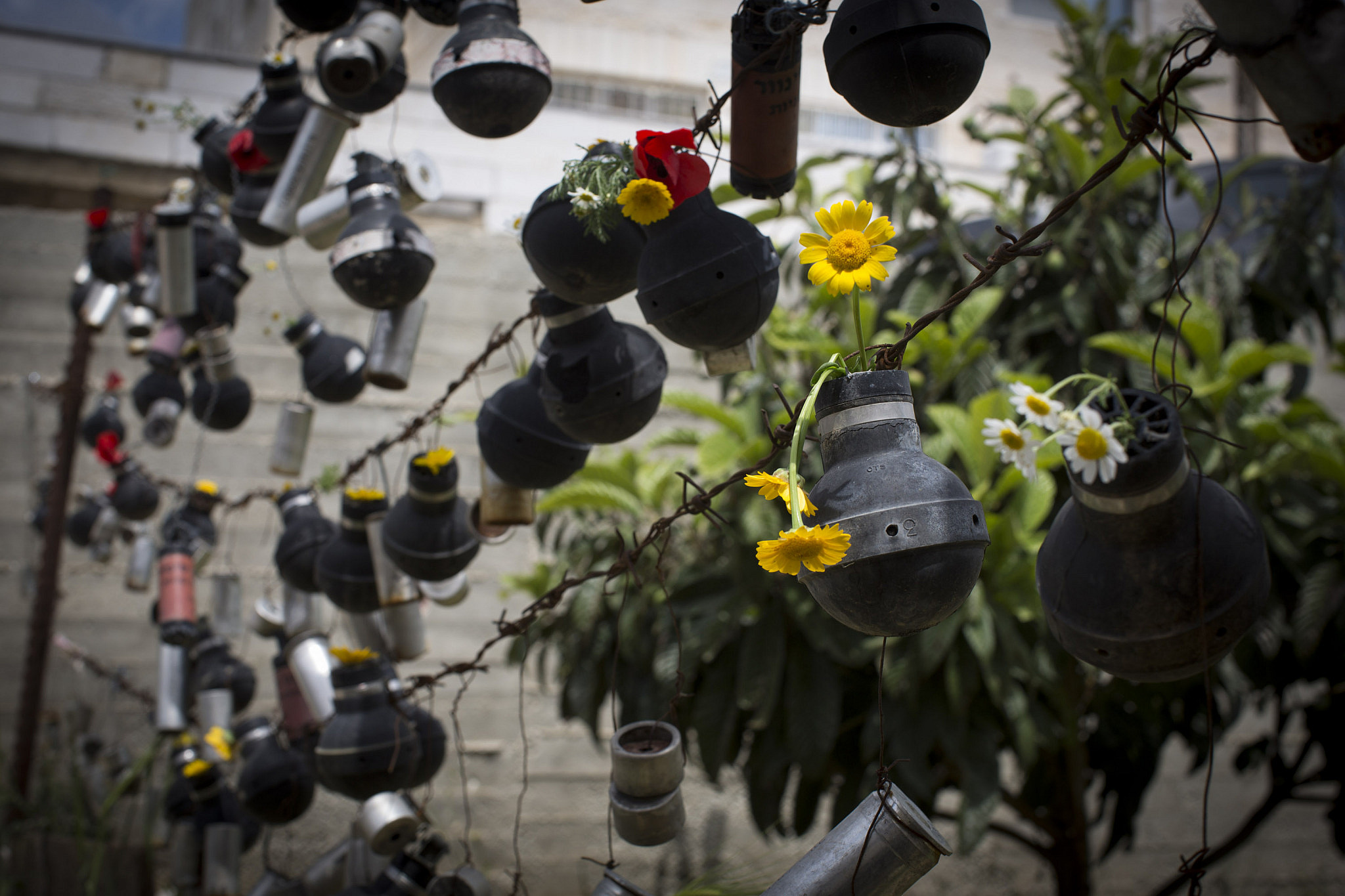 Flowers put inside used tear gas canisters are seen before the weekly protest against the occupation in the West Bank village of Nabi Saleh, April 10, 2015. (Oren Ziv/Activestills)

Once you have seen that fence up close, you can never quite unsee it. I remember entering the Tamimis’ front yard on a visit to Nabi Saleh in January 2020, as a part of a trip I took with a cohort of students from my graduate program. My eyes fixated on the tear gas canisters lined up along the gate as we stepped into their home. Inside, we were surrounded by posters of the Tamimis’ martyred family members.

Ahed’s cousin Janna — sometimes described as “the world’s youngest journalist” — spoke to us about the weekly protests, the Israeli soldiers who invade in the middle of the night, and the casualties the Tamimis had endured over the years. She showed us video footage she herself had taken, often graphic, including one of an Israeli soldier shooting their cousin. Many of us cried as we listened to her. But then Janna told us: “Save your tears. We cry tears when we are tear gassed.” Ahed tells her audience the same thing in her book: “Thank you for your tears, but I don’t want your sadness.”

In narrating the permanent occupation of Nabi Saleh, Tamimi and Takruri’s storytelling speaks to the asymmetry of the so-called “conflict” while exposing the word itself as a gross misnomer. From memories of Tamimi’s childhood to her detention, “They Called Me a Lioness” forces readers to dismantle the “conflict” label as a key barrier to understanding the reality of Israeli oppression — a barrier imposed by those who cite its nature as “complicated.”

The authors correct misconceptions surrounding the often simplified distinction between nonviolent versus violent resistance, the former of which the Tamimi family advocates for. “The main rule was that our grassroots resistance movement had to be unarmed,” they write. “The aim was to struggle and resist without hurting or killing anyone… Given the bulletproof uniform he’s [the Israeli soldier] wearing and the armored vehicle he’s riding in, a stone is highly unlikely to cause him any serious bodily harm. A stone, for us, is a symbol.” But even the most stringent distinction, they note, doesn’t matter to Israel: “as Palestinians, we are punished if we protest violently and nonviolently.” 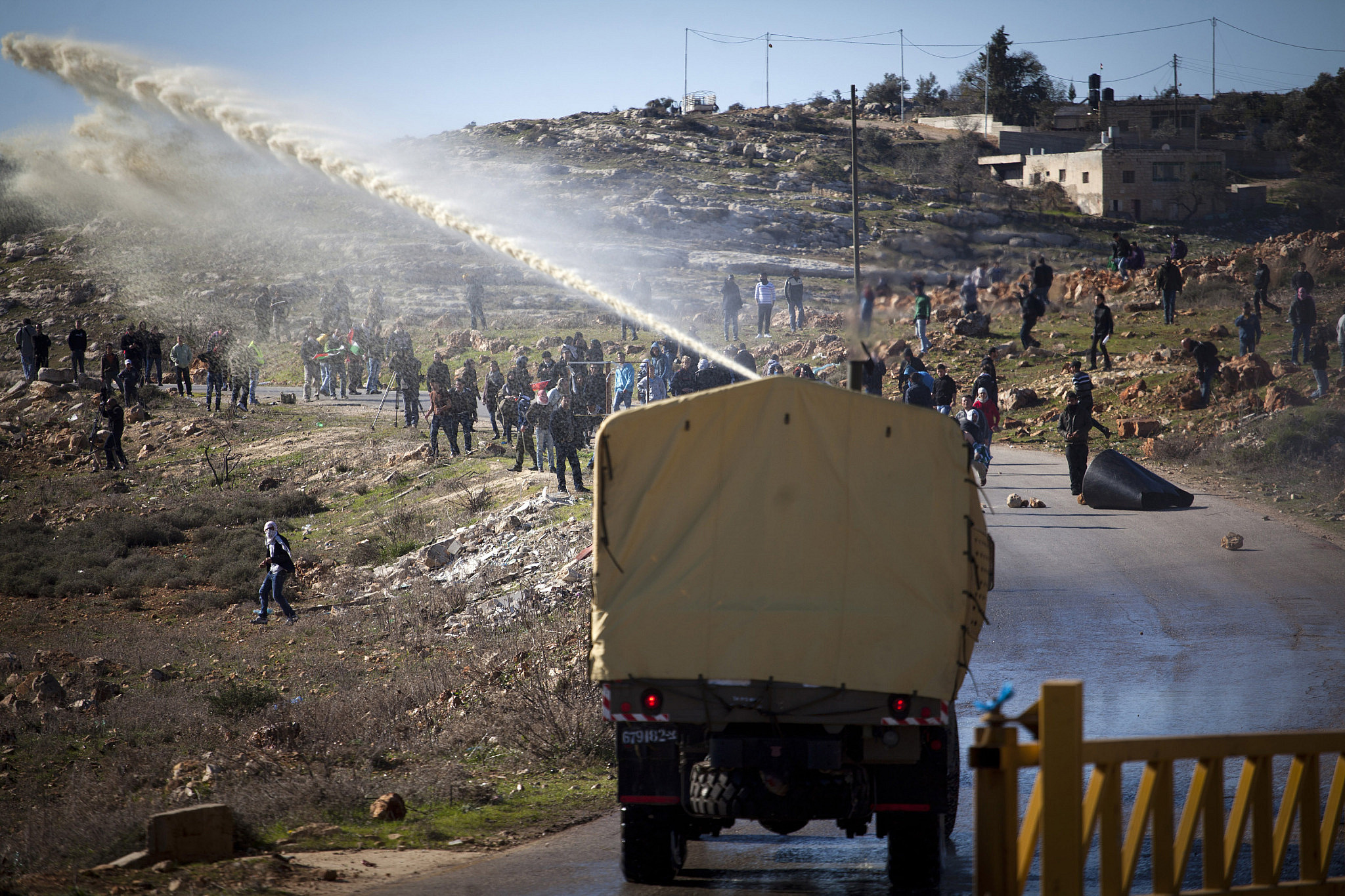 Israeli forces deploy the “Skunk Truck,” a water cannon that shoots a powerful spray of foul-smelling chemicals, during protests following the funeral of Mustafa Tamimi in the West Bank village of Nabi Saleh, December 11, 2011. (Oren Ziv/Activestills)

Tamimi and Takruri also personalize Israel’s egregious violations of international law, namely when detailing Tamimi’s experiences in Israeli prison: the lack of a search warrant; interrogating a minor alone for hours without food or water; transferring prisoners outside of occupied territory into Israel; lack of due process or any semblance of a fair trial; administrative detention; and repeated, intrusive, and arbitrary strip searches. All these serve to demonstrate that the democratic laws Israel claims to uphold are revoked where Palestinians are concerned — ostensibly arbitrary actions that are, in fact, sinister and systematic.

The book further sets the record straight in several respects. Rejecting the media’s consistent singling out of her story, Tamimi points out that hers is the universal experience of Palestinian girls, prisoners, and families. “Being arrested by Israel’s army has always been a fact of life for us, practically a rite of passage that’s impossible to avoid,” she writes. Rather than centering herself, she casts her lens on the collective — the resisting activists, the village, the extended family unit — which is rare for a memoir, a form that so often exceptionalizes and solely centers its subject. In so doing, Tamimi challenges the mainstream media and Israel’s attempts to single out and ostracize her among Israelis and Palestinians alike.

Tamimi’s experiences, she tells us, galvanized her to pursue a legal education in the face of occupation, even while in prison. She recounts the international law course that another prisoner set up during their time in detention, albeit not without difficulties. The students — prisoners facing sentences from one year to upward of 10 years — were assigned a final project, and thus watched the news while drawing from their own lived experiences. Tamimi defiantly, and definitively, shows us that legal and political advocacy cannot be stripped of the personal.

The authors impart a message of both urgency and hope, especially as the Palestinian liberation struggle gains traction worldwide together with the growing intersectionality of social justice movements. The parallels of the struggle resonate with experiences of U.S. police brutality, pinkwashing and the LGBTQ+ fight for true equality, and the use of technology to surveil and control Black and brown communities.

The Boycott, Divestment, and Sanctions (BDS) movement, which follows the nonviolent tradition promoted in Nabi Saleh, has also been gaining greater grassroots legitimacy — despite efforts by governments and organizations to effectively criminalize it — in large part thanks to documentation and public education on the issue in ways that mainstream media has failed to, including with the new documentary “Boycott” by Just Vision. 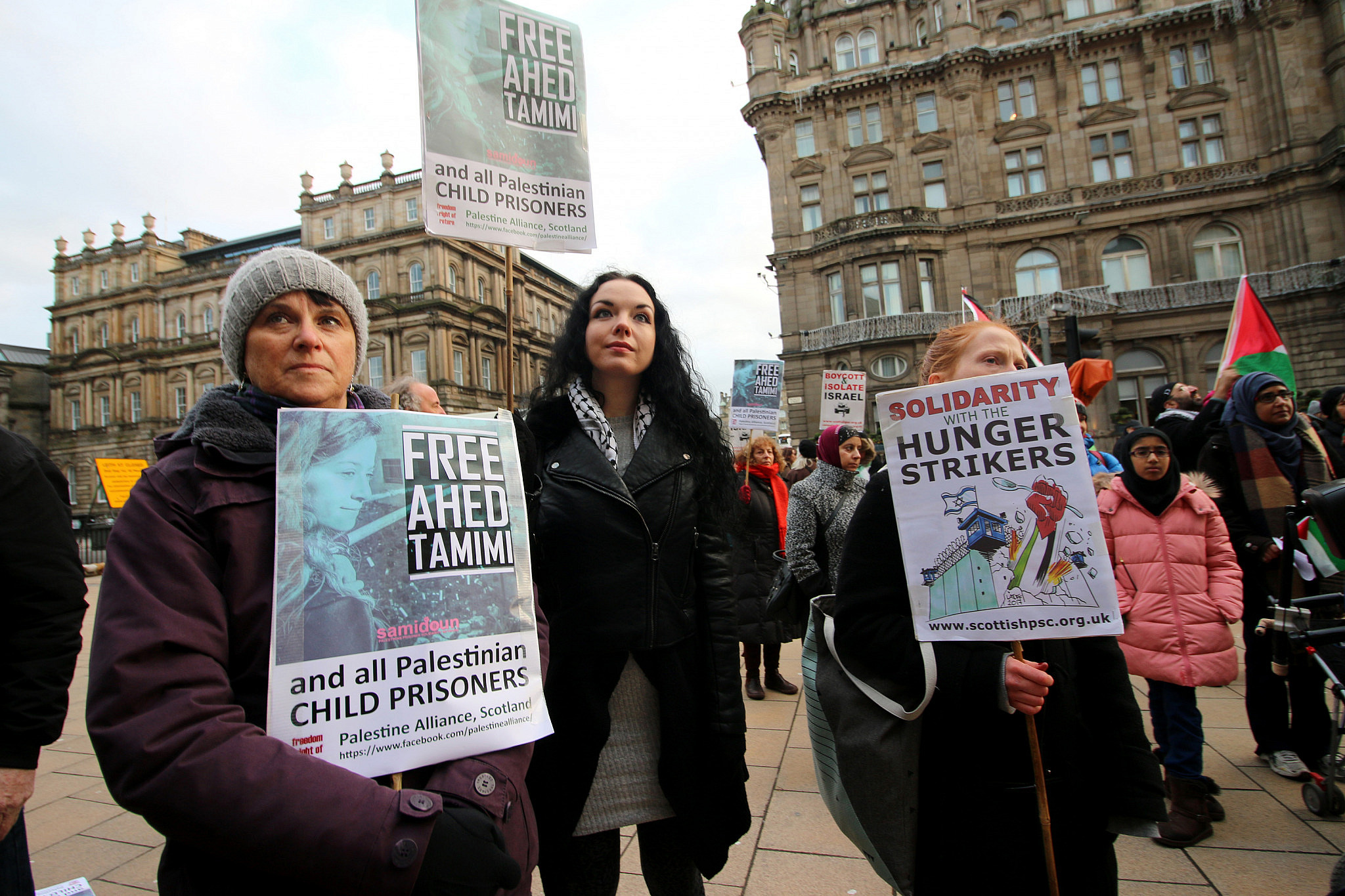 Palestinians and supporters hold pictures of Ahed Tamimi, a prominent 16-year-old Palestinian activist that was detained by the Israeli army from her home in the West Bank, calling for her release, Edinburgh, Scotland, January 6, 2018. (Ahmad Al-Bazz/Activestills)

Crucially, Tamimi’s and Takruri’s book demonstrates how Palestinians are restoring their “permission to narrate,” as Edward Said wrote for “The London Review of Books” in 1984 — or rather, staking their claim over who owns it, who is stripped of it, and who coopts it. To be able to narrate your own history and offer your own evidence in the face of countless attempts to curtail your voice is one of the most important powers an individual and community can hold. In this sense, the discourse on Palestine is finally shifting for the better, and the publication of this book, as well as the traction it has gained and has yet to gain, is a testament to that.

Tamimi ends the book with a final assertion against the demonizing portrayals that so many have imposed on her, imparting: “I thank everyone who reads the book and sees me as I wish to be seen: a freedom fighter.” The line recalled an often-cited quote we unpacked in an international humanitarian law class I took in grad school — how one person’s terrorist is another person’s freedom fighter. I thought of Ahed Tamimi then, and I think of her now.

Sarah Ariyan Sakha works in tech and human rights policy, and is involved in Palestine solidarity organizing. She holds a Masters in International Affairs Candidate from Columbia University’s School of International and Public Affairs and a BA from Princeton University, and has worked in various research and policy advocacy-based roles across the social and public sector.