The 17-year-old from Nabi Saleh filmed slapping an Israeli soldier has already been imprisoned for three months. Her mother and cousin also sign plea deals. Activist slaps prosecutor in court. 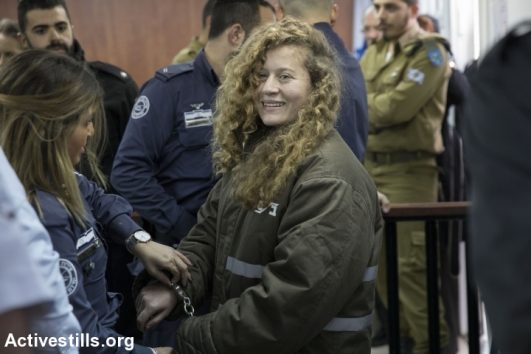 Ahed Tamimi, the teenager from Nabi Saleh arrested after a video of her attempting to push two armed Israeli soldiers off of her family’s porch went viral, signed a plea deal in Israeli military court on Wednesday, and will serve eight months in prison including three months time served.

The now-famous video of Ahed was filmed shortly after Israeli soldiers shot her cousin, Mohammed, in the head with a rubber-coated bullet and fractured his skull. An Israeli military court denied bail to Ahed and her mother, Nariman — the latter charged with incitement for livestreaming the video of Ahed and the soldiers — in January.

In court on Wednesday, an activist present during Nariman’s hearing slapped a military prosecutor and was arrested. The activist, an Israeli citizen, reportedly told the prosecutor after slapping him: “who are you to judge her.”

Nariman also signed a plea deal under which she will serve eight months.

Over 70 percent of juvenile defendants accept plea bargains in Israeli military juvenile courts, which have a startling conviction rate of more than 95 percent. 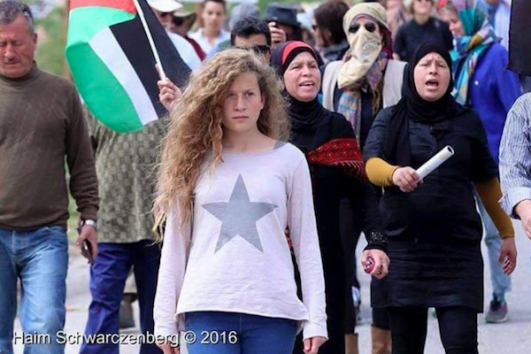 The practice of pre-conviction detention (denying bail) is the default in Israeli military courts. This means that Palestinian minors are faced with a choice of either fighting the charges and remaining in prison for the duration of their trial or signing a plea deal and receiving a reduced sentence.

Given the time spent in prison awaiting trial — Ahed, for example, has been imprisoned for three months already and her trial hasn’t even begun — even a defendant who is acquitted still might spend more time in prison that they would if they had agreed to sign a plea deal.

Ahed has become an international symbol of Palestinian resistance since her arrest, her picture appearing on posters and billboards around the world. Dozens of American cultural luminaires, including Alice Walker, Rosario Dawson, Cornel West, and Danny Glover called for Ahed’s release in February.

In late February, the army arrested Ahed’s cousin Mohammed Tamimi — still awaiting surgery to reconstruct the part of his skull that was removed—in a pre-dawn raid. He was interrogated without a lawyer or a parent present, and released a few hours later after being pressured to confess that his head injury was caused by falling off a bicycle — and not by an Israeli rubber-bullet, fragments of which were extracted from his skull.