Fancy a vacation with breathtaking views of the Holy Land? Airbnb will let you rent out luxurious cottages atop barren hilltops, making no mention of the fact that they are in settlements on occupied land. 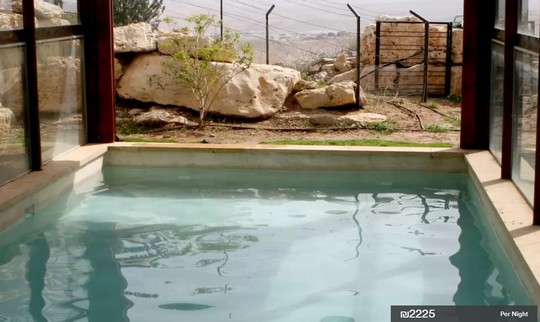 Screenshot of an Airbnb listing in the West Bank settlement of Anatot.

Airbnb, it has come to our attention, enables anyone to rent rooms and vacation homes in Israeli settlements in the West Bank. Anyone who is not of Palestinian descent, of course.

Without exception, the listings, some which appear to be luxurious cottages and others that are caravans sitting on barren hilltops, make no mention of the fact that they are in settlements on occupied land. Almost all claim to be in Israel, despite the fact that they lie beyond the country’s borders.

Exploring the Airbnb website turns up dozens of cheap rooms and homes with pastoral views and many just a short drive from Jerusalem — all pretty enticing. Especially if nobody tells you that you’re paying to be a settler few days. 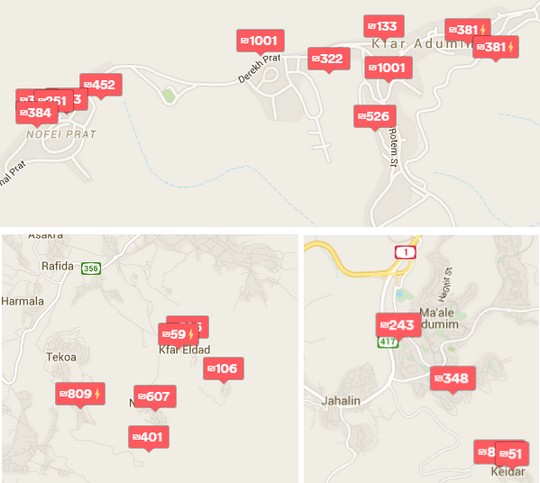 Many of the listings we found appeared similar to the type of rural weekend getaway cabins — “tzimmerim” — one can find throughout northern and southern Israel. But we also found far more troubling listings.

For instance there was the caravan listed in Havat Gilad — “[a] small village really in the nature. It is very private place with a very fresh air and gorgeous view.” The price for one night: NIS 325 ($83). 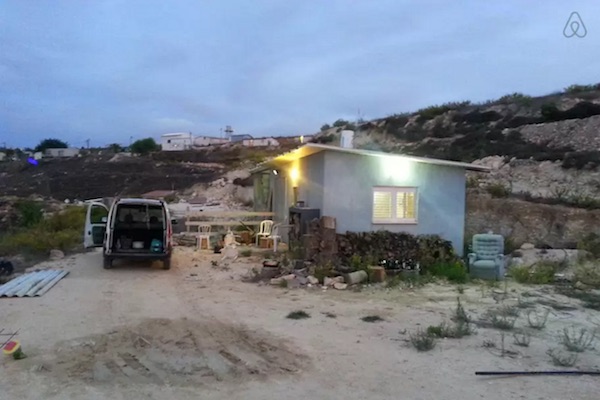 A photo from the Airbnb listing in Havat Gilad (Screenshot)

What the listing fails to mention is that Havat Gilad is actually a settlement outpost, illegal even according to Israeli law. Someone making a reservation on Airbnb has no way of knowing that the outpost was — at least partially — illegally built on Palestinian land. There is no mention of the fact that more than one resident of Havat Gilad have been convicted of violent “price tag” attacks against Palestinians and their property.

Similarly, one can rent a room in the “Ma’ale Rehavam” outpost, which was also illegally built on private Palestinian land. The settlement outpost was named after Rehavam Ze’evi, one of Israel’s most famous proponents of population transfer. The “nice place in the Judean desert … about 15 minutes driving from Jerusalem” can be had for just NIS 239 ($60) a night. When we enquired about renting the room, however, the lister declined, citing the fact that “the government has yet to connect it to electricity.” 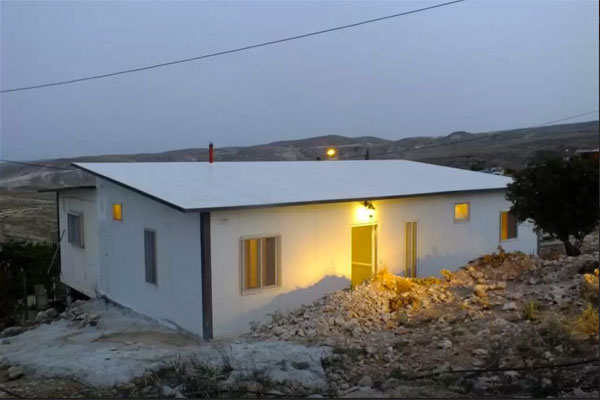 A photo from the Airbnb listing in Ma’ale Rehavam.

It is worth repeating that none of these listing mention the fact that they are located within the borders of the state 135 countries recognize as Palestine.

Declined due to the ‘political situation’

Israeli settlements in the West Bank are almost entirely Jewish-only communities for a number of reasons, including legal and military restrictions. We wanted to know whether Airbnb reservations would adhere to the local segregation regime. In order to test the theory, we created an online persona of an American citizen of Palestinian descent who wanted to come to visit and enjoy the quieter and cheaper option of staying in an Israeli settlement.

We attempted to make reservations at dozens of listings, contacting dozens of Airbnb hosts — and succeeded at securing one single room. Most of the time, Haled, the name we gave our would-be vacationer, was declined for no stated reason. Some hosts, however, were honest enough to say why they wouldn’t rent to Haled.

In the settlement of Tekoa, known for its relative openness, which the hosts described as “a sweet welcoming neighborhood with helpful people,” Haled was politely turned away. The host responded: “I’m very sorry but I don’t think that it’s possible … it’s very sensitive here … [I] hope that in [a] different life we could be good friends.”

In the settlement of Anatot, for a NIS 690 ($175) unit promoted as “Nature at its Best,” the hosts were more matter-of-fact: “I am sorry but we will not be able to confirm your reservation. Due to the political situation it is not possible at this time. All the best and happy holidays.”

This appears to be thinly veiled discrimination along ethnic or national lines. Even if the hosts reserve the right to refuse service to anyone they want, the decision to do so on an ethnic or national basis is problematic, to say the least.

The only place where our request was accepted was another listing in Tekoa, where Haled was told he would have to undergo a special security check at the entrance to the settlement. The host’s description of the special procedure as a “problem” suggests that it isn’t implemented for guests of other ethnic or national backgrounds:

Not only are settlers directly profiting from the occupation by renting out their rooms and guesthouses online, so is Airbnb, the American company that takes a 3 percent fee from hosts and a 6-12 percent fee from guests. All Israeli settlements are illegal under international law.

Airbnb’s website does not differentiate between rooms in Palestinian cities towns and those in Israeli settlements — its maps of the West Bank display no differentiation between areas under Israeli control, and those under Palestinian control.

The “Green Line” is delineated by an easily missed and not-clearly-labeled dotted line, which means that even a person who does not want to become a temporary settler has no way of knowing what they are getting into. Moreover, a search for units in the Jerusalem area brings up results of several rental options in nearby settlements — beyond the 1949 armistice line.

By charging for listings in illegal West Bank settlements, Airbnb enables Israelis and foreigners alike to financially support the settlement economy and even profits itself off the theft of private Palestinian land. By not clearly distinguishing what is a settlement and what isn’t, the company also runs the risk of misleading its customers into inadvertently lending their hand to that very theft. 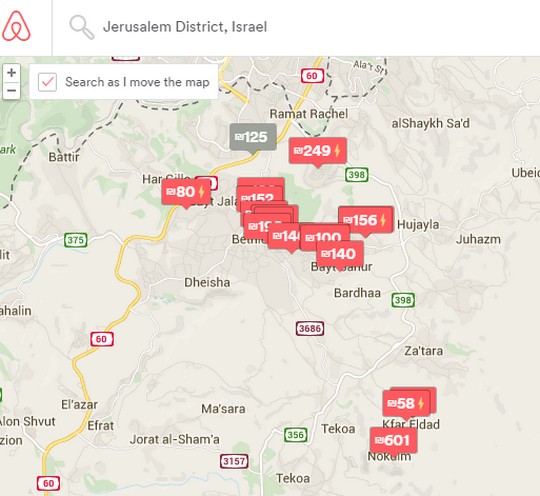 According to Airbnb, there is no difference between the Jerusalem area and West Bank settlements. (screenshot: Airbnb.com)

There is no doubt that the Airbnb units in Israeli settlements feature breathtaking views, but the situation in the West Bank is anything but normal. The red-roofed settlement houses with luxurious pools and manicured gardens are real, but they also function as a facade. Behind every settlement is a village whose land was forcefully taken and Palestinian families whose children were hauled off to military prisons in the middle of the night. Depending on one’s nationality, there are even separate sets of laws in the West Bank.

It is needless to say that none of that information is offered to an unwitting tourist looking to Airbnb in order to find a cheap place to stay on the outskirts of Jerusalem.

We had about as much luck getting a response to this article from Airbnb as we did renting a room in a West Bank settlement outpost on the company’s website.

Despite repeated requests over several weeks, the California-based company never responded to our questions. We wanted to know whether the company was worried about the legal liabilities of doing business in Israeli settlements and whether it is concerned by the discrimination almost guaranteed to take place when renting housing units in the settlements.

After several weeks of radio silence, we contacted Airbnb again — this time as Haled, complaining about ethnic discrimination.

Within two minutes of sending that message, the company responded saying that it would put Haled in touch with a “community expert” — Airbnb’s most knowledgeable community members, who are selectively chosen to help hosts and guests with answers to their questions.

Sure enough, within a couple of minutes, a “community expert” sent Haled a message expressing how “upset” he was by the situation, and urging me to me to report the offending hosts to the company.