Israel responded to the “flytilla” with a wildly disproportionate deployment of police and extraordinary security checks. But Palestinian citizens of Israel are discriminated at the Ben Gurion Airport on an hourly basis – and are now able to racially profile themselves, using a specially provided form to warn the airport authorities of their arrival. 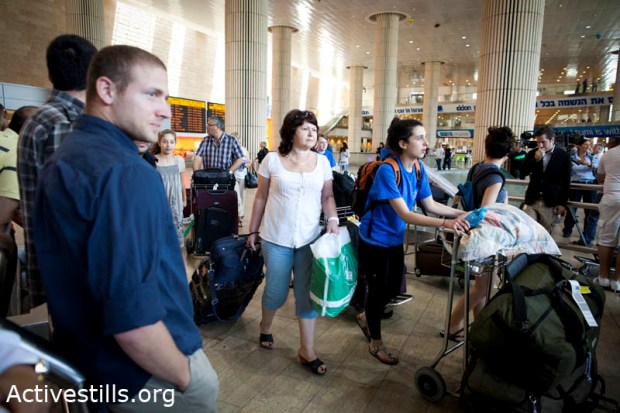 In the see-saw of travel-craving and homesickness preceding any trip abroad, there’s one moment when you can feel the balance finally shifting and you becoming glad to be leaving Israel: When you arrive in your car or taxi to the airport gates and a burly, submachine gun-wielding security guard asks you to roll down the window to wish you a good evening. This isn’t about courtesy, of course; he wants to get a good look at your face, and, most importantly, to hear your accent. If your accent sounds even remotely Arab, you will be asked to disembark, answer a flurry of intrusive questions, and asked to open your trunk (just in case it holds  a big wooden crate labeled “Acme TNT”). If your accent is “normal”, you’re swiftly waved through.

The undisguised racism of Israeli airport security profiling is a fact of life here as much as summer weather and the impossibility to park in Tel Aviv; only recently did civil rights organisations begin to challenge the practice. Arab passengers get different stickers on their passports at the end of the “did you pack a bomb by mistake” questioning in the queue to the check-in; their baggage is often searched manually (raising interesting questions about the effectiveness of the carwash-sized suitcase screening machines that everybody else go through); and in general, Palestinian Israelis can expect their check-in process to take about twice as longer, both in Israel, and, if they have the misfortune of flying with an Israeli airline, on their way home from abroad.

Recently, however, we’ve moved up a notch and are now asking the Palestinian Israelis to discriminate themselves. The Hebrew version of the Israel Airports Authority has this curious page, reachable through Ben Gurion Airport > Passenger Information > Security Information > [Official] in charge of minority treatment. The general information page of the section explains, in stumbling Brechtian:

“The security treatment of the passengers forms a centrally important link in the chain of service provided to passengers in the process of their departure from the country and return to the country via the Ben Gurion International Airport.

The unit includes four delegates: Mr Abu Matir Mohammed, Mr Abu Ghanem Salame, Mr Yossi Makleda and Mr Salah Dubaa, employed on shifts at the airport. Their role is to coordinate, mediate and assist in the processes of security clearance, without infringing upon the necessary security processes.”

Members of minorities is, of course, a euphemism for “Arabs” about as embarrassingly transparent as “persons of colour,” and is used most often by the media to report an Arab is held on suspicion of rape or other offenses (they never specify the nationality when the suspect is a Jew). Incidentally, it’s forever “members of minorities”, not “minorities,” because, as observed in recent years by academic like Yehouda Shenhav, Yoav Peled and Yossi Yona, the Jewish and democratic state can (grudgingly) abide only with recognising individual rights of individual Arabs on a case by case basis, never with describing them as a minority with a claim to collective rights.

But the real treat is the following form, which groups of Arabs (say, extended families or groups of friends)  are advised to complete and send to the airport ten days ahead of their arrival (presumably so that the airport authorities doesn’t deploy tanks across the tarmac if they espy more than two Arabs moving together, talking in Arabic and being all Arab). The PDF is a touch more honestly titled “EthnicMinoritiesForm.” It reads:

To: The official in charge of the members of minorities population

Regarding: Information on flight abroad

2. The group/family includes _____ passengers, as follows:

4. I would be thankful for any assistance you can extend at the airport.

It’s cute that they bothered including pt.4, ensuring that the Arabs are not only discriminated at their own request, but are duly thankful. More than anything else, this is a clear and stark example of normalisation of apartheid: When both parties accept an ethnically discriminative practice as a given and just seek to make it a little more palatable; and when the discriminated party is expected to pro-actively cooperate, “in their own best interest.”

The sad thing is that I can imagine official delegations and tour organisers probably do make use of the form, and both them and the airport authorities actually do prefer this Very Inferior Person treatment to the crude yanking of Arab passengers out of the waiting line. Have you made holiday plans for Israel this summer?