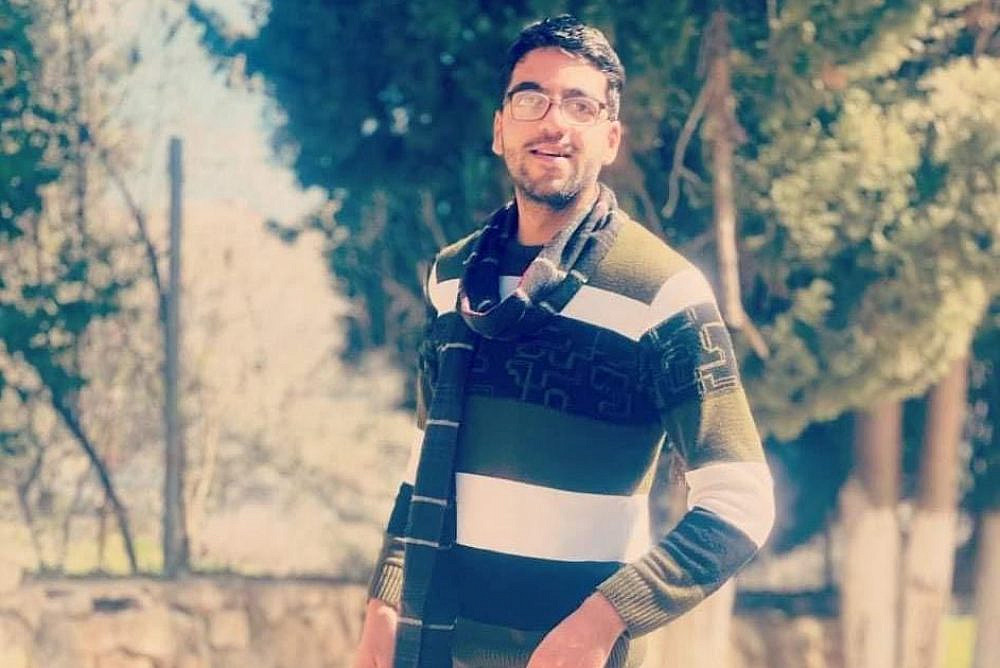 A week after Israeli soldiers fatally shot 18-year-old Amar Shafiq Abu Afifa, his childhood friend Mohammed, 17, returned to the spot where he had been killed. As he walked up the hill toward the grove where Abu Afifa died, Mohammed searched for something in the tall grass. They had been in that exact  area the day before the shooting, he said, and had spelled their names out in the grass using rocks. “I set out the English letter M, for Mohammed, and Amar wrote out his name in Arabic.”

We soon came upon the rocks, lying there like a headstone for a friendship cut short. They took a selfie on that walk, too, and it now forms the backdrop on Mohammed’s phone display. The two boys are embracing, smiling into the camera. “We were like brothers,” Mohammed, who was with his friend when he was shot in the head, told +972. “I’m still in shock.”

Israeli troops shot Abu Afifa on Mar. 1, as he hiked on an isolated hilltop just outside the al-Arroub refugee camp in the occupied West Bank, where both he and Mohammed grew up. Abu Afifa was killed as he was running away, as the army itself acknowledged in a statement. Abu Afifa’s death certificate, produced by the Israeli Interior Ministry, recorded a bullet wound to the head and another one to his leg.

The IDF Spokesperson’s statement claimed that Abu Afifa and Mohammed had approached a lookout spot near the Israeli settlement of Migdal Oz, and that soldiers “gave chase… [and] launched a detention procedure that included shooting toward the suspect.”

But when +972 visited the area it was clear the shooting happened some 100 meters from the lookout — which itself is simply a gazebo, built illegally around 400 meters from the settlement. There’s also a small communications tower on the hill, which appears to be where the soldiers made their ambush.

“A soldier came out from the trees,” Mohammed said. “We didn’t think anyone was there so we were startled. He yelled at us to stop and immediately shot in the air. We got so scared we started running. And then he just opened fire, massively. It was beyond all reason. I heard bursts of machine gun fire. The entire thing happened in seconds. At that point I didn’t yet know Amar was dead.” 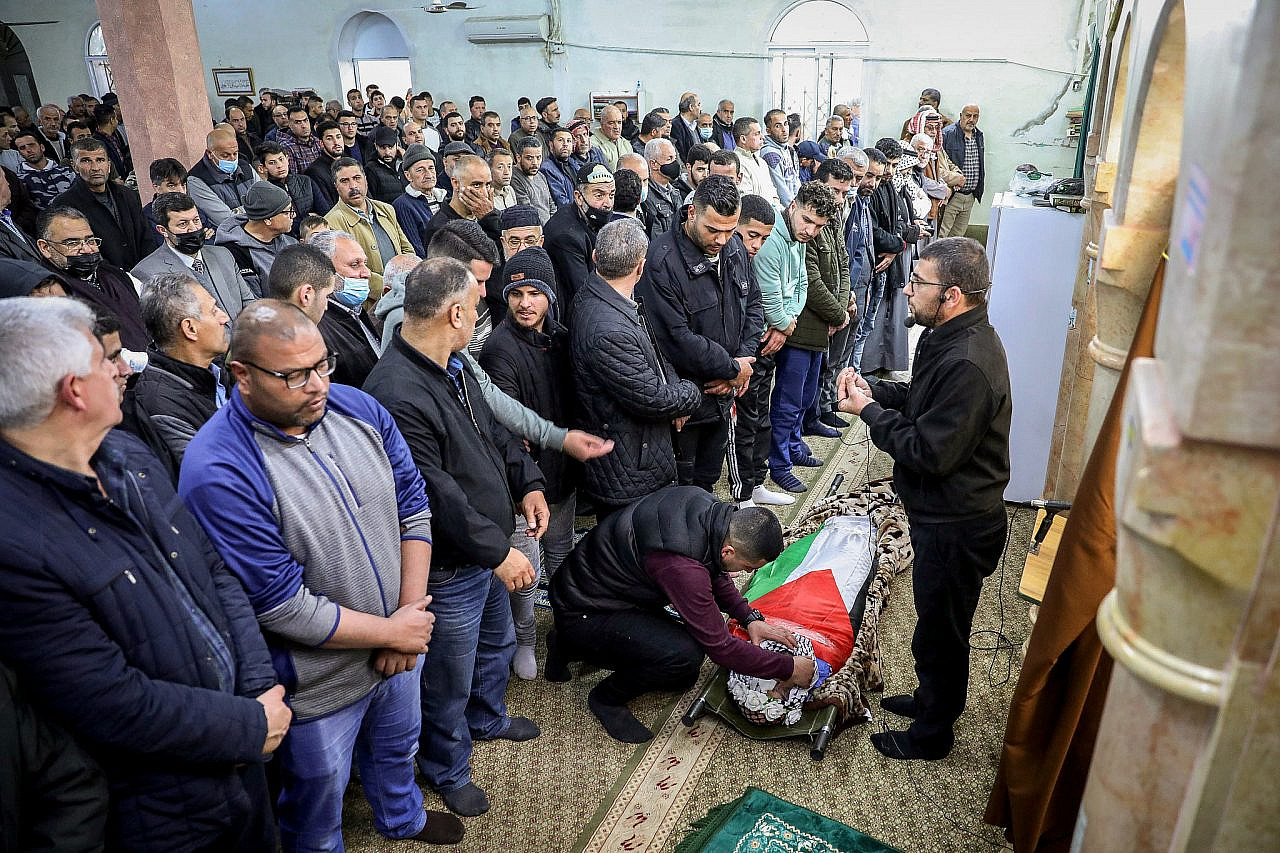 Palestinians mourn near the body of Palestinians attend the funeral of Amar Shafiq Abu Afifa, who was killed by Israeli security forces while out hiking, Al-Arroub refugee camp, March 2, 2022. (Wisam Hashlamoun/Flash90)

Abu Afifa was one of seven siblings. His parents, Shafiq and Samiha, have a picture of their dead son, raised on a stretcher at his funeral, in their living room. Shafiq says the Israeli army held on to his son’s body for 10 hours, before calling him at 3 a.m. to pick up Amar’s body at the gate of a settlement. “I couldn’t stop crying,” he said. As others began to reminisce about Abu Afifa, his mother, Samiha, excused herself and left the room.

Al-Arroub refugee camp, where the Abu Afifa family lives, sits between Bethlehem and Hebron in the southern West Bank. It is home to some 11,000 Palestinians whose families were expelled in 1948 from villages such as al-Falouja and Iraq al-Manshieh, in what is now southern Israel near Kiryat Gat.

“The camp is like a cage,” Mohammed said. “There isn’t anywhere to go, to escape.” During their walk the day before the shooting, he recalled, they had been discussing the future. “Amar was already a university student, a very successful one, and I was thinking about dropping out of school. He was pressuring me to keep at it, to graduate from high school. That’s what we talked about. He’d come to my place every week to help me with my homework.”

Abu Afifa graduated from high school last year, and immediately signed up for university in Ramallah to study caretaking. “His dream was to be a doctor or a nurse,” his father said. Abu Afifa dropped out a few months later, feeling the financial burden was too high on his parents. He relocated to a smaller, cheaper college closer to the camp.

“As a boy in the camp you don’t get a chance for a different future,” said Abu Afifa’s elder brother, Issa. “Even if you study, you still end up in manual labor.”

Shafiq, who is employed by UNRWA as a sanitation worker, chimed in: “This is why I wanted to build something else for my kids. I worked at my stinking job every day to send Amar to university. I said, at least for him, at least he could have something… now I don’t know what to do.” He added: “I’m killing myself at work. I haven’t stopped picking up trash. Not even after Amar died. I’ve got no choice. Got to make a living.”

A threat during a funeral

During Abu Afifa’s funeral, a Shin Bet officer calling himself “Captain Nidal” called Shafiq. “He said he was an investigator in charge of the Hebron area,” Shafiq recalled. “I told him I was at the funeral and asked him, ‘What do you want?’ He said, ‘Take good care of your kids now.’ It sounded like a threat. I said to him, ‘We’re living in a cage, you shoot my kid, and then you threaten me?’ I felt like I was nothing to him. And I hung up. I haven’t heard from the Shin Bet since.” 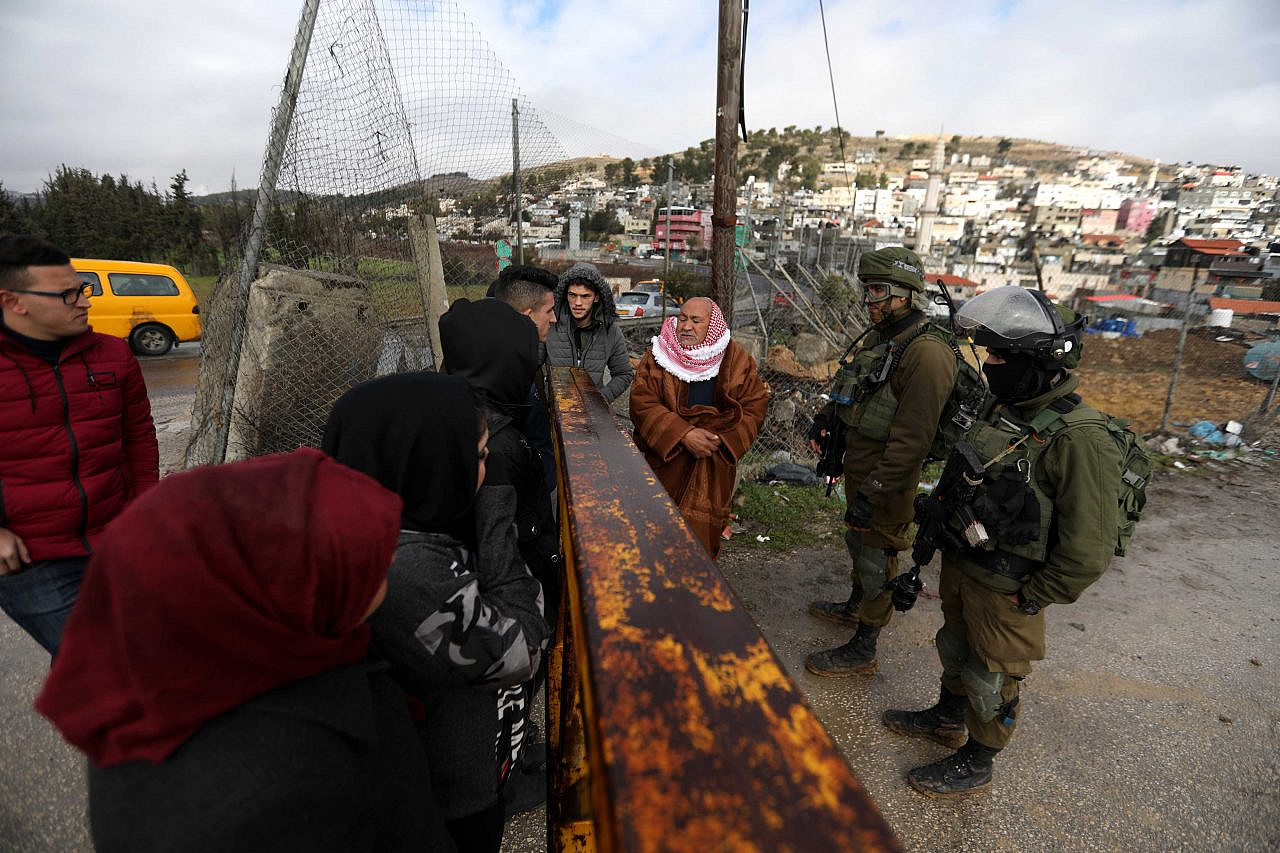 Mohammed said there isn’t a young man whose life hasn’t been affected by the Shin Bet in one way or another. “Every village in the West Bank has a captain that monitors the young people, especially ones involved in clashes,” he explained. “Captain Kerem is in charge of my village. He calls kids in my class. He joins our Telegram chat groups.”

Mohammed’s fear of the Shin Bet is why he requested to only be identified by his first name in this interview. “He can do anything he likes to you,” he said about “Captain Kerem.” The Shin Bet did not return our request for comment.

In addition to the Shin Bet’s surveillance, there are also weekly clashes with the Israeli army in al-Arroub refugee camp. Route 60, a highway built alongside the camp, is a favored spot for young people to throw stones at passing Israeli cars.

A new road that will bypass the camp further away has been under construction for the past two years. In the meantime, soldiers have set up “flying” checkpoints at the entrance to the camp, and even deep inside it. This reporter drives by the camp at least once a week, and in the past year there has always bee a checkpoint with Palestinian cars queuing up to cross it. A military outpost has been set up across the road from the camp. Night raids are routine, and often spark clashes too.

The clashes usually feature stone throwing and the occasional Molotov cocktail from the youths, with live gunfire from the soldiers. As Issa and I walked through the winding streets of the camp, he pointed out one house after another. “There isn’t a single family here that hasn’t lost a son,” he said. Abu Afifa, for his part, had begun avoiding protests to concentrate on his studies.

Eleven Palestinians have been shot in al-Arroub in the past nine years, three of them minors. Lubna al-Hanash, 21, was shot in 2013, walking through the grounds of al-Arroub College; the army opened fire after someone threw a Molotov cocktail at a passing Israeli car, and killed her instead.

Iyad Fadailat, 28, was shot in 2014. He ran into a flying checkpoint right outside his home, and got into a tussle with the soldiers. He was shot when running away; the army claimed he had tried to snatch a rifle. Mohammed Jawabra, 19, was shot in his own home in 2014; soldiers were carrying out an ambush on a nearby roof and opened fire when they allegedly saw a suspicious figure aiming an improvised weapon, but a subsequent B’Tselem investigation debunked the claim.

Omar Madi, 15, was shot in February 2016 by a soldier positioned at the guard tower across the road; the army claimed he was throwing stones at the tower. Omar al-Badawi, 22, was shot in 2019 while trying to put out a fire started by a Molotov cocktail that some teenagers had thrown at soldiers nearby; the army later admitted it had no justification for opening fire.

Risible, disproportionate, or otherwise, the army provided justifications in each of the last 10 killings of al-Arroub residents — all, of course, conducted in the context of a five-decade-long military occupation. Not in this case. The camp’s long and wretched list now has another entry: Amar Shafiq Abu Afifa, 18. Cause of death: Shot in the head while strolling through the wood with his best friend.