Hiba al-Labadi has been on hunger strike for 35 days after being imprisoned by Israel since August without trial. Now Palestinian and Israeli activists are trying to raise awareness about the case. 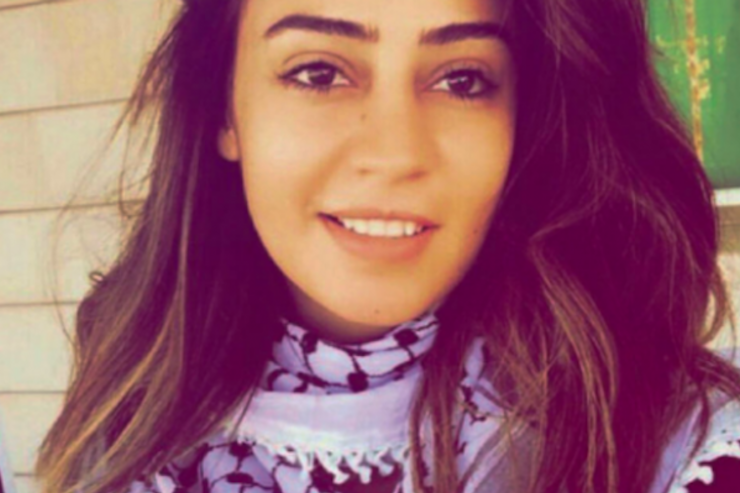 Hiba al-Labadi, who has been in Israeli administrative detention since August. (Courtesy)

Palestinian and Israeli activists launched a viral campaign on Sunday demanding the release of a Jordanian citizen who has been on hunger strike for the past month after being imprisoned by Israel without trial since August.

Hiba al-Labadi, a 24-year-old Palestinian-Jordanian national, was detained by Israeli forces on August 20th at the Allenby Bridge border crossing while traveling from Jordan with her mother to a wedding in the West Bank city of Jenin. Her arrest was reportedly related to meetings she allegedly had with Hezbollah affiliates during a previous visit to Beirut, where she was visiting her sister.

Al-Labadi has been on hunger strike for 35 days.

On Sunday, activists in Israel launched a 30-hour long protest action in Tel Aviv’s Habima Square during which several women sat handcuffed to a chair inside a transparent box meant to resemble al-Labadi’s interrogation cell. The action caused passersby to stop and take photos of the display, with several of them calling the police to report an “elderly woman tied to a chair.” Two officers arrived on the scene to look into the complaints. 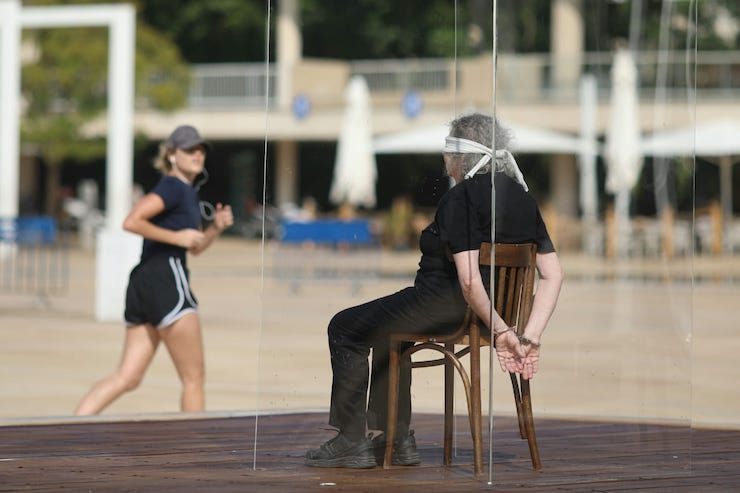 An Israeli activist part in a protest action against the administrative detention of Hiba al-Labadi, a Jordanian-Palestinian who has been in Israeli custody without charge since August, October 27, 2019. (Oren Ziv/Activestills.org)

“This is a young woman who has been imprisoned since August with no indictment and no one in Israel is talking about it,” said Sigal Avivi, a prominent political activist and one of the organizers of the initiative. According to Avivi, the activists decided to take action after reading about both the torture al-Labadi faced and harsh conditions in which she is being held. Avivi said al-Labadi’s arrest was also an opportunity to strengthen the protests against the practice of administrative detention. “We can no longer be silent. Time and time again we see Israel use this tool, which is in violation of international law.”

Over the weekend, activists in Israel launched an internet campaign that included a photo of al-Labadi with the caption “Have you heard of me?” in Arabic and Hebrew, in order to draw attention to her administrative detention. The Hebrew-language Facebook page that provides information about her arrest and the struggle to release her has been shared hundreds of times since its launch.

Al-Labadi will be brought before Ofer Military Court for a hearing on her administrative arrest on Monday. Activists plan to hold a protest vigil outside the courthouse.

On Saturday, dozens of Palestinians demonstrated on Salah a-Din Street in East Jerusalem, demanding the Israeli army release al-Labadi. The police forcefully dispersed the crowd and arrested two protesters, while officers were filmed throwing the demonstrators to the ground and sitting on them during the arrests. Activestills photographer Faiz Abu Rmeleh was manhandled by an officer while filming the clashes.

Attorney Juwad Bolous, who visited al-Labadi during detention, said that since her arrest she has been interrogated for 16 days straight without being allowed to see her lawyer. Most of the interrogations lasted hours, taking place as she was handcuffed and tied to a chair. According to Bolous, the interrogators cursed at and spit on her, threatening to arrest her sister and her mother. “All the means of torture and oppression were used to force her to sign a damning confession. But despite the cruel investigation, she did not confess,” Bolous wrote over the weekend.

Al-Labadi rejects the accusations against her, which were not made public aside from a statement by the Shin Bet, according to which she was arrested under “severe security circumstances.” The Shin Bet statement hints that she was arrested for posts she published on her private Facebook page, which expressed support for Hezbollah as well as violent attacks in the West Bank.

According to reports by Palestinian journalists, al-Labadi was transferred from Jalma Prison to a hospital in Haifa for treatment, but was remanded in custody soon thereafter.

Correction: A previous version of this article misstated Al-Labadi’s age. It has been amended to reflect that she is 24 years old.