Rather than an army secret, the systems supporting the occupation include such normal institutions as taxation, infrastructure projects, the education system and, of course, army service.

The debate over refuseniks from IDF intelligence unit 8200 unleashed acrimonious debates all week. While I have already observed some of them, here are a few more that stand out.

Carolina Landsmann has one of the most powerful opinion pieces I’ve read in a long time, in Haaretz. It may yet appear in English, but for now the excerpts here are my translation. Like one former member of Unit 8200 who spoke to me, Landsmann says their act of refusal is a statement that intelligence work and the system of occupation are directly linked, cutting into the belief that only those who hold the guns are responsible.

She then takes this insight to its next logical step. In blunt language, she writes that the refuseniks point to a perspective built into Israeli thinking that is

key to understanding what allows the state to continue its control and oppression of millions of Palestinians for 47 years. The illusion that certain islands within Israeli society are disconnected from the military rule over the territories, and those lucky enough to fit themselves into one of them are free from the responsibility for its injustices, [that illusion] has anesthetized the conscience of those opposed to such control, and stops them from rising up against it.

All of Israeli society, writes Landsmann, supports this system. I find this one of the most essential and accurate observations of Israeli reality that is rarely understood.

Military rule… is not a secret system of the IDF – it is the largest, most visible project, with broader participation than any other endeavor in Israel.

Rather than an army secret, the systems supporting the occupation include such normal institutions as taxation, infrastructure projects, the education system and, of course, army service. She concludes with disturbing clarity, “No one can say ‘I have no part in it.’”

I don’t believe Landsmann means that all Israelis are evil, and I reject that idea myself. But the fact that all social and political structures of society support the occupation is true and must be internalized. Not in order to blame individuals; to help them know that stopping this means identifying their personal contribution, through whichever social system they belong, and changing it. The refusal letter, she hopes, may be the first steps of this profound mental shift.

The important thing is to break down the imaginary border-wall that separates the army from civil society, the one that distinguishes the residents of the state from those of the settlements in terms of their responsibility for Palestinians. In Israel, a democratic country, all citizens – soldiers and settlers – participate in injustices and bear the responsibility for them.

Ironically, the far right has said this repeatedly. They argue that settlers are unfairly demonized, when in fact all of Israel, people and government alike, supports settlements.

Once, at a Nakba commemoration event at Tel Aviv University, I spotted far-right Hebron settler leader Baruch Marzel wearing a T-shirt reading “Solidarity: Sheikh Munis,” the original Arabic name of the Palestinian village where the university now stands. For a fleeting instant I wondered if the world had turned upside down. But simultaneously I knew it was mockery, an extension of the slogan: “The fate of Hebron will be the fate of Tel Aviv!” 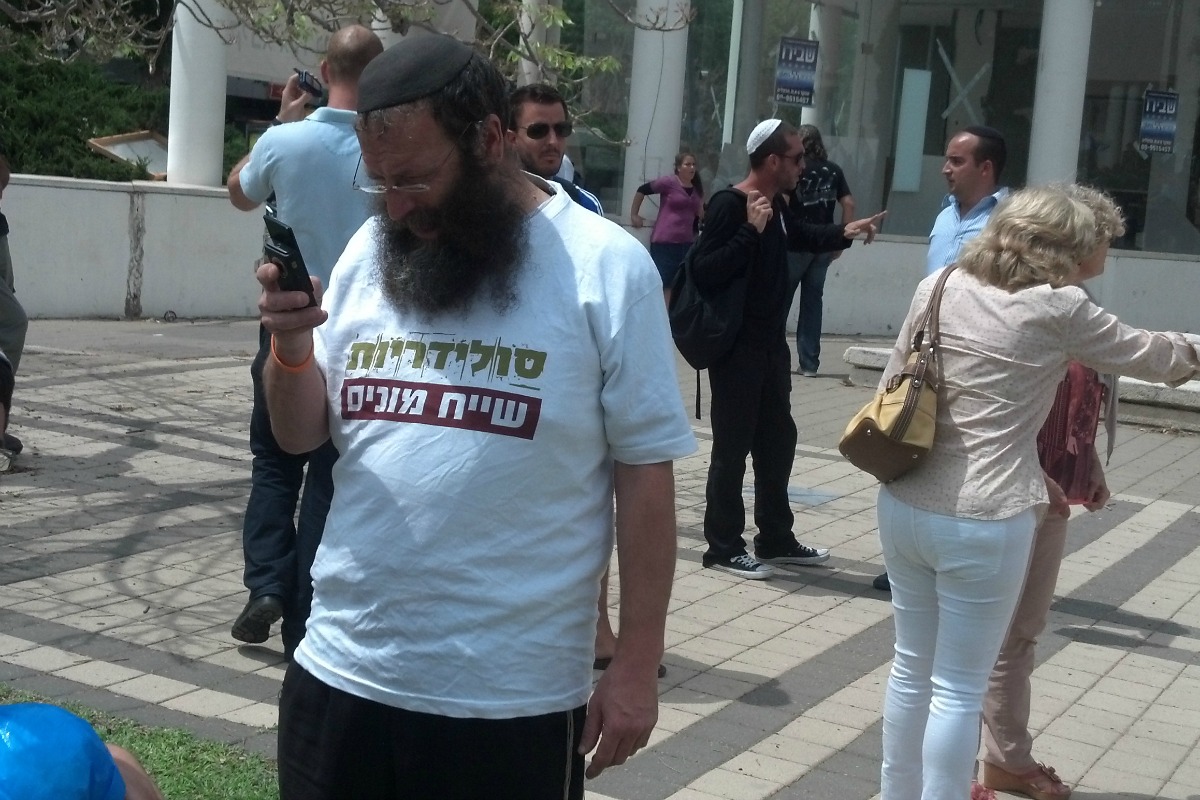 Settlers in his camp believe it is hypocritical for Israel to make any distinction between its claim on Tel Aviv and Hebron. By that logic, there is also no distinction between Israelis who make life in Tel Aviv what it is today, and those responsible for making Hebron what it is today: a city divided by identity at the level of its sidewalks, by virtue of Israeli military law.

I believe the realization that regular Israelis are part of the occupation and regular Israelis must act to stop it, is at the heart of a bitter and deepening wedge between different types of “left” in Israel. The condemnation of IDF refusal by politicians considered center-left (primarily Labor, and primarily Shelley Yachimovich) infuriated some people not normally identified with the far left.

Uri Misgav, who has been writing at length about Unit 8200 all week, published a short piece today, so simple it hurt. What else can a person do?

He successfully conveyed the suffocating sense that no action opposing the occupation is legitimate or effective. His everyman citizen who rejects this policy has nowhere to turn. “Time after time he sees how the ‘left’ and ‘center’ strengthen coalitions of the right that entrench and perpetuate [the occupation].”

If Landsmann revealed that all Israelis are part of it, Misgav’s average citizen searches for some way not to be (my translation).

He just doesn’t want to contribute his part. He wants to live in peace…It seems absurd to finance [the occupation] with his taxes, but tax evasion is a criminal offense and a tax rebellion isn’t realistic. If he wants to boycott settlement products, they explain to him that boycott is an awful thing and who more than the Jews must remember that…If he joins a human rights group, they accuse him of damaging the image and reputation of the state. If he agitates for external support or international involvement, he becomes a Jew-boy doormat to the anti-Semitic goyim. Of course, he cannot fathom any sort of violence.

So, Misgav’s everyman against the occupation says, enough. I don’t know how to end it, but I just can’t take part. Switching to the first person and speaking for that everyman, Misgav writes:

I won’t bomb him from the air, raid his home in the dead of night, make his life miserable at checkpoints, spray rubber or sponge bullets at demonstrators, blackmail him to become a collaborator, and I won’t even gather intelligence that will enable all this to go on to the end of days.

Misgav then walks through the vile attacks that would be, that were, unleashed on such a person. The conclusion is a tragic plea.

I might rephrase the end: is there a legitimate way to stop this?

Related:
Refusal by elite IDF reservists angrily dismissed as ‘political’
IDF’s ‘start-up nation’ reservists refuse to serve the occupation
How can you tell that Israeli refuseniks are are scaring the system?