The assassination of Zuhair al-Qaissi, which sparked the escalation in the south, points to Israel’s weak Supreme Court, a lack of transparency and accountability, and the state’s flip attitude towards its judicial branch–as do some street signs in Tel Aviv 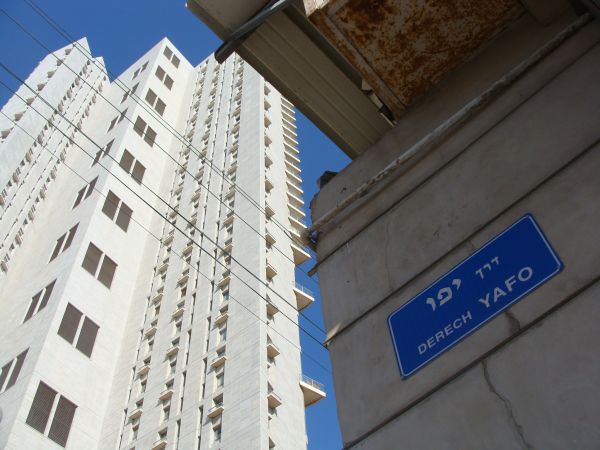 Even though the Supreme Court ordered Tel Aviv and three other municipalities to add Arabic to their street signs in 2002, this sign appears only in English and Hebrew. Ironically, it marks the road to historically Arab Yafo (Jaffa) (photo: Mya Guarnieri)

The recent escalation between Israel and Gaza began after Israeli forces assassinated Zuhair al-Qaissi, a leader of the Popular Resistance Committees (PRC), a militant group composed of members of various Palestinian parties. Haaretz noted that the PRC was “the organisation that captured Gilad Shalit”, the Israeli soldier who was freed in October 2011. The army says that al-Qaissi was behind the August 2011 attack that took place on the Israeli-Egyptian border – even though the PRC denied involvement and it was later revealed that the militants came from Sinai, not Gaza.

While army sources took care to point out al-Qaissi’s alleged involvement in the August 2011 incident, his assassination wasn’t just an act of punishment. No, Israel killed him on the basis of secret evidence – evidence that is not subject to legal or judicial review – that supposedly proves that al-Qaissi was planning a terror attack. Never mind that the Israeli supreme court’s December 2006 ruling placed numerous restrictions on such assassinations.

Fatmeh el-Ajou, an attorney with Adalah, the legal centre for Arab minority rights in Israel, explains that while the judgment did not place a blanket prohibition on targeted killings, it stated that the decision to carry out an assassination must be made on a case-by-case basis, “depending on the evidence that [security forces] have.” But, without seeing the security forces’ secret evidence, it’s impossible to know if al-Qaissi was indeed planning an attack, and if the army was in line with the 2006 ruling. There’s no transparency in this so-called democracy and, without transparency, there is no accountability to the state’s highest court. “From the perspective of human rights law,” el-Ajou adds, “assassinations are not legitimate … They should only be carried out if there is a ‘ticking bomb.’ [Suspects] should be brought to trial.”

To some extent, the 2006 ruling dovetails with this, stating that, whenever possible, the person in question must be arrested and tried – which is exactly what didn’t happen in 2007, when the army violated the Supreme Court’s restrictions on targeted killings and assassinated two men they had the power to detain instead. And then there’s the laundry list of less dramatic examples, instances when state bodies quietly ignore the court, revealing Israel to be the weak democracy it is. Such cases have spurred former Deputy Attorney General Yehudit Karp to send not one but two letters of complaint to the current Attorney General Yehuda Weinstein. Here’s a partial sampling of rulings that Israel can’t be bothered to fully implement:

• In 2006, the Supreme Court struck down the binding arrangement, a policy that binds migrant workers to one employer, essentially making his or her visa contingent on his employer’s whim. Last year, the Knesset circumvented this ruling, passing legislation so severe that human rights groups referred to it as the “slavery law”.

• In 2007, the Israeli Supreme Court ruled that the separation barrier in the West Bank Palestinian village of Bilin served no security purpose in its location and ordered the state to move the fence. While Israel did move it in 2011, more than four years after the court’s decision, villagers are still separated from some of their land.

• During the December 2008 to January 2009 Israeli military operation known as Cast Lead, Israel barred media from the Gaza Strip. Even though the Supreme Court ruled against the ban, the press was not admitted to Gaza.

• In April 2011, the Supreme Court overturned the policy that stripped migrant workers who had children in Israel of their legal status, calling it a violation of the state’s own labour laws. Almost a year later, Israel is still deporting some of these women and their children, despite the fact that the very mechanism that made them “illegal” has been nullified.

In his 2006 ruling on targeted killings, former Supreme Court President Aharon Barak quoted an earlier judgment in which he’d stated: “At times democracy fights with one hand behind her back.” But in its war on Palestinians – and anyone that Israel deems an “other” – not only does the state use both hands, it fights with the proverbial gloves off.

This article first appeared in The Guardian Comment is Free on Wednesday March 14, 2012.