AIPAC has never cared about Israel’s disregard for civil and human rights. So why should it care about Trump’s? 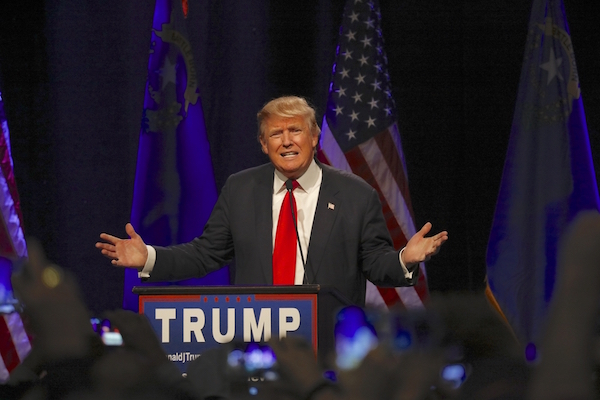 Republican Presidential hopeful Donald Trump has been making headlines for weeks as he wins primary after primary across the U.S.

But over the past few days he has also been making headlines in the Jewish-American press for a different reason: the mounting opposition to his scheduled address to AIPAC’s annual conference this Monday. (Hilary Clinton and Joe Biden will also be speaking there, Cruz and Kasich have also reportedly confirmed their presence and Bernie Sanders was invited, but it is unclear whether he will attend.)

Two East Coast rabbis created an ad hoc group, Come Together Against Hate, that is organizing a silent walkout of Trump’s speech. Another group calling itself Jews Against Trump has launched an online petition calling on AIPAC to rescind its invitation, according to a report in Think Progress.

The Reform Movement, meanwhile, has criticized Trump for his “hate speech” and implied in a press release that it would oppose his presence at AIPAC, but did not make clear how.

On its Facebook page, “Come Together Against Hate,” which at the time of writing had nearly 1,000 members, states: “We support AIPAC and the importance of continuing to build a strong U.S.-Israel partnership and we denounce hatred.” The group goes on to state: “We are committed to saying that Donald Trump does not speak for us or represent us, and his values are not AIPAC’s values.”

On the site JewSchool, Sarah Brummer-Shlay writes: “By allowing Donald Trump to speak at a major Jewish event, we have turned our backs on marginalized communities. It is that simple. We are not neutral, we are complicit.”

What all these groups and individuals rallying together against Trump have in common is the visceral confidence that Republican frontrunner defies their Jewish values and does not represent the larger American Jewish community. That his incendiary speech and anti-immigrant rhetoric is a red line. That even if he is currently the Republican presidential favorite, he doesn’t deserve a podium at an American Jewish event, much less the largest and most high profile one in the community.

But what exactly are AIPAC’s values? Its mission statement is devoid of values. It does not talk about equal rights or freedoms. Rather, it is “to strengthen, protect and promote the U.S.-Israel relationship in ways that enhance the security of the United States and Israel.”

Anyone familiar with the Israel lobby’s policies and conduct over the last few decades knows that it long ago turned its back on marginalized communities by continuing to embolden a state that systematically denies rights to millions of people under its control.

AIPAC’s active fortification of Israel’s near 50-year occupation is the single most obvious reason why it doesn’t represent most American Jews’ stated values. If we look at other major issues that divide Israel and U.S. Jews in recent years, AIPAC has continuously gone against the general zeitgeist of American Jewish society.

While most American Jews polled supported the Iran deal, AIPAC waged an aggressive, well-funded mass lobbying and public relations campaign against it. It went full throttle with the Netanyahu doctrine, disregarding American Jewish public opinion, not to mention the interests of American national security.

On the issue of the establishment of a viable Palestinian state alongside Israel, AIPAC has continuously lobbied against. When the Palestinians announced they would petition the UN for statehood in 2011, AIPAC helped persuade 446 members of Congress to co-sponsor resolutions opposing the idea.

When mounting civilian casualties led many progressive American Jews to question Israel’s deadly war on Gaza in 2014, AIPAC doubled down with its unquestioning support and lobbying for the war.

So knowing AIPAC’s declared mission and record, knowing that it has consistently guaranteed that Israel has carte blanche to continue doing as it pleases militarily, regardless of the rationale or the outcome, and its continued enabling of the denial of basic civil and human rights to millions of Palestinians, Trump’s appearance isn’t really that shocking or anomalous.

AIPAC is an organization whose sole purpose is to ensure Israel has the political and financial wherewithal to maintain its position as the supreme military power in the Middle East — no matter what. It has never cared about Israel’s disregard for human and civil rights. So why should it care about Trump’s?

The protests and organizers shouldn’t focus on Trump, but rather on AIPAC itself. For these American Jews, AIPAC has never represented their values anyway, so the heat should be on the lobby, not on the candidate with the big mouth.