The cousin of Muhammad Abu Khdeir’s videotaped beating by Israeli police in Jerusalem led to widespread outrage. He had been arrested and accused of participating in riots. 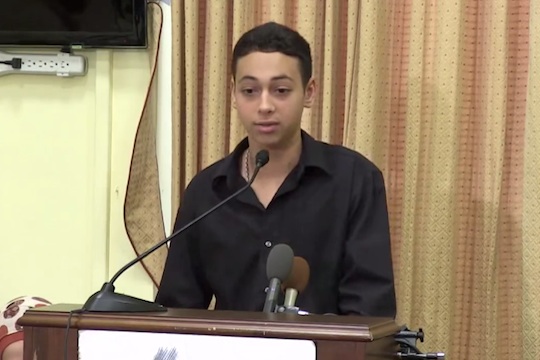 Palestinian-American 15-year-old Tariq Abu Khdeir, whose severe beating by Israeli police while he was in custody last summer was caught on video, has been cleared of all wrongdoing in Israel, the Jerusalem Post reported on Wednesday.

Following his beating, the American citizen was arrested and held under house arrest for nearly two weeks before being permitted to return home to Florida.

Israeli police said the 15 year old took part in the protests, resisted arrested and was carrying a slingshot to throw stones.

The American Consulate in Jerusalem told the Jerusalem Post on Wednesday that Tariq has been cleared of all wrongdoing and is free to return to Israel to visit his family in occupied East Jerusalem.

In September, one of the police officers was criminally charged with assaulting a minor.

The teen, Tariq Abu Khdeir, said at a press conference in Florida at the time, he thinks the other two Israeli officers should be facing charges in his beating.

Israel police violence has taken the lives of at least three Arab citizens in recent months, leading to significant protests throughout the country. A Bedouin men was shot to death by Israeli police during a raid earlier this month, and another Bedouin man was killed during clashes after his funeral. In November, police shot in the back a 22-year-old Palestinian citizen of Israel while he was fleeing.

Matt Surrusco contributed to this report.