A 60-year-old American woman was evacuated to an Israeli hospital this afternoon, after Israeli soldiers caused her serious head injury as they demolished a protest tent in the West Bank village of Izbet al-Tabib near Qalqilya. A Swede and two British activists were arrested during the protest. 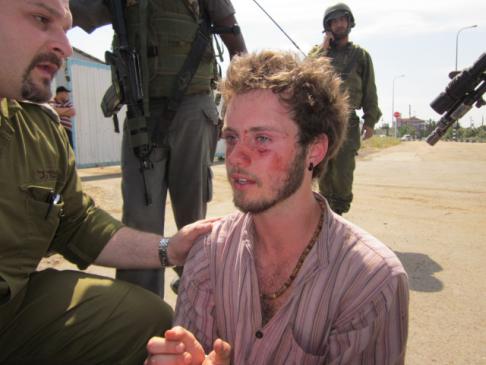 An injured protester detained after being beaten up Photo:popularstruggle.org

Israeli soldiers, accompanied by bulldozers and other heavy machinery entered the village of Izbet al-Tabib south of Qalqilya earlier today, to demolish a protest tent set up yesterday by the villagers. The army began construction of a fence that would cut the villagers off from Highway 55, a major highway in the West Bank, and of their agricultural land.

During the eviction of the tent, the soldiers violently arrested two British activists and a Swedish activist. They also caused a head injury to a 60-year-old American woman, who also suffered blows to her wrist, which is suspected to be broken. She was evacuated to an Israeli hospital.

The violent arrests were made solely under the pretext of declaring the area a “closed military zone”. However, the soldiers and Border Police officers carried out the arrests without having shown any document declaring the area as such, as the law requires them to do. The three are still in custody and are currently held at the Ariel police station.

During today’s protest, Bayan Tabib, the head of the village council, received a promise from an Israeli Civil Administration officer that the fence will only be erected on the far end of Highway 55, and will not cut off the village’s access to the road or their land. Tabib attributed the promise to today’s protest, saying that the “the protest today is the only reason that they agreed to move the fence.”

The village of Izbet al-Tabib, which consists of 45 structures and is home to 247 residents, was built in the 1920’s and is located entirely in area C according to the 1995 Interim Agreement (Oslo II). Israeli authorities do not recognize the village and 32 out of its 45 houses, as well as its school, have been served demolition orders in recent years. Izbet al-Tabib is the fifth poorest village in the West Bank and villagers have already lost 45% of their land due to the construction of Israel’s Separation Barrier.

Report compiled with information from the Popular Struggle Coordination Committee