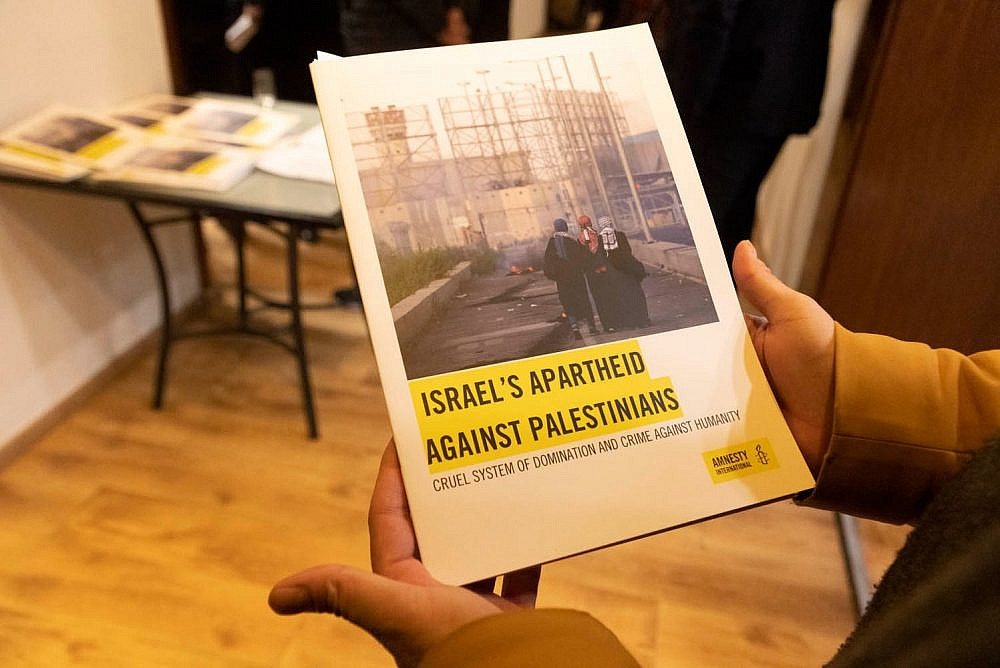 A copy of Amnesty International's new report accusing Israel of committing the crime of apartheid against Palestinians, launched in Jerusalem on February 1, 2022. (Oren Ziv)

On Tuesday, Amnesty International’s German section participated, albeit with reservations, in the launch of the organization’s new report accusing Israel of committing the crime of apartheid against Palestinians. Just one day later, the announcement regarding the report had been deleted from its website, meaning all that remains in German is a separate overview on the Austrian section’s website.

While the German section’s website still shows a title in its news section referring to the report, it now leads to the homepage of the international version of the report. The now-deleted German announcement (which was cached and remains accessible here) begins with a rather general description of the report, stressing Amnesty’s recognition of the State of Israel and its right and obligation, under international law, to protect Israelis. It concludes with Amnesty International calling on the Palestinian Authority and Hamas to uphold their obligations under international law — though neither are mentioned on the campaign site in English.

This is followed by an even more unusual disclaimer, which I have translated here in full:

The systematic extermination of Jewish people was planned and implemented in Germany. Antisemitism in Germany — violent attacks, property damage, and conspiracy ideologies — is still present and at a disturbing high. This places a special responsibility upon the German section of Amnesty. In the current and historical national context, an objective, fact-based debate on the classification made by the report is difficult. To counteract the danger of instrumentalization or misinterpretation of the report, the German section of Amnesty will not plan or carry out any activities in relation to this report.

This contextualization is certainly odd, though not unfamiliar in the German context. The last two sentences are where it gets truly bizarre, laying out a course of action that seems diametrically opposed to the suggested reasoning: “[T]o counteract the danger of instrumentalization or misinterpretation… Amnesty will not… carry out any activities on this report.” Identifying the need for substantial debate and worrying that the report might be misinterpreted in Germany, the local section resolved to simply stand back and do nothing. 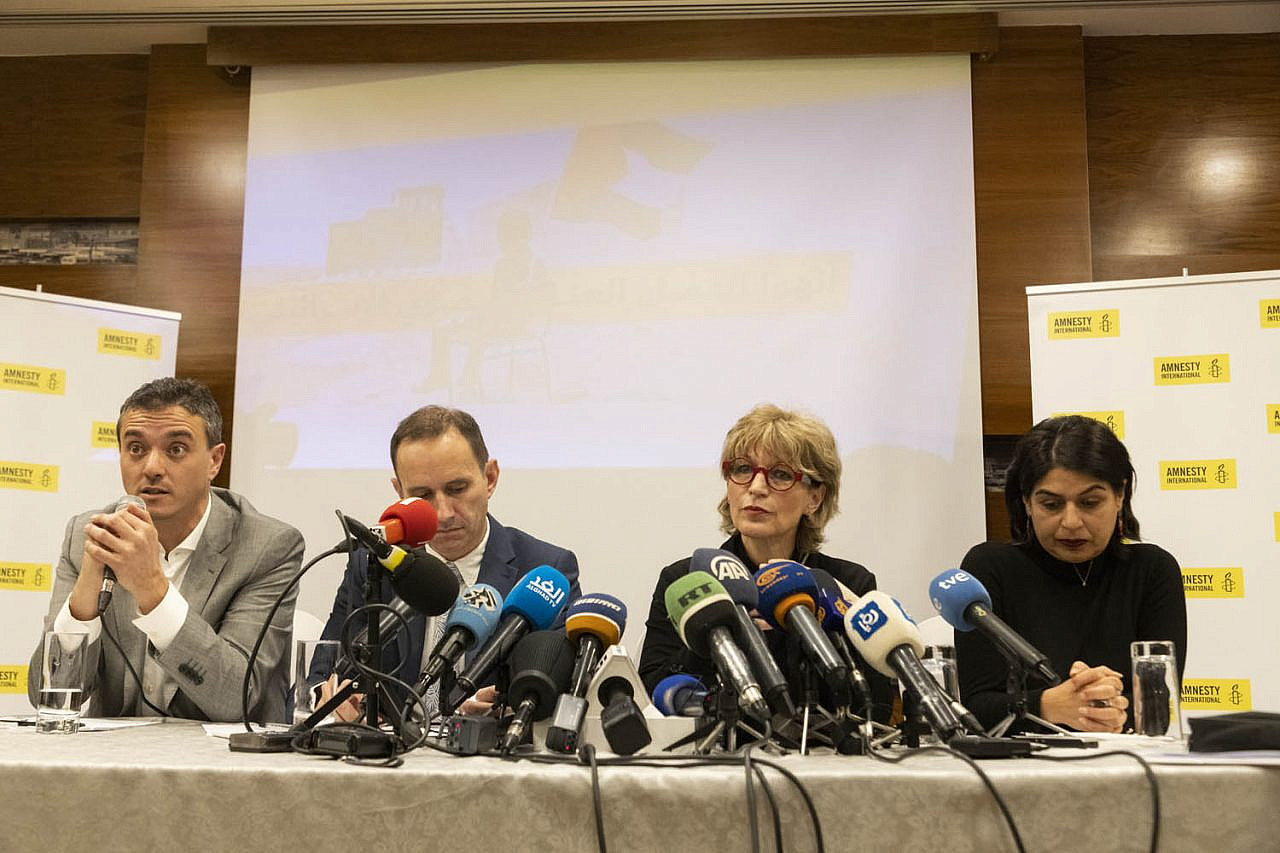 Amnesty Germany is right to be wary of feeding antisemitic conspiracy ideologies. But how would a person inclined to antisemitic paranoia interpret the statement and its retraction? They would see that supposed antisemitism concerns even apply to mere fact-based criticism of Israeli policy, that it cannot be talked about openly, and worst of all — how quickly such criticism gets mysteriously expunged from the record.

One would expect an organization like Amnesty, when dealing with concerns about how the report could be interpreted, to actively work to shape the conversation around it. Indeed, the disclaimer suggests the German section considered what would be needed to responsibly attend to the report’s international launch — “An objective, fact-based debate on the classification made by the report” — yet decided not to do so, presumably because it would be “difficult.”

Instead of fighting for Palestinians’ human rights and against antisemitism in the same breath, the German section shamefully announced its withdrawal from the debate over the report, thereby leaving the field open to “instrumentalization or misinterpretation” — the very thing it had hoped to counteract.

To be fair, defending the human rights of Palestinians in Germany comes at a price. It is met with knee-jerk accusations of antisemitism from mainstream politicians and media, which can be enough to end an individual’s career or end a group’s access to public funding and spaces. One can imagine Amnesty International’s national leadership assessing the situation and concluding that it simply cannot afford to actively promote the report in Germany due to the hostile political climate in the country. But sadly, it is just as likely that Amnesty Germany was not at all inclined to speak out about Palestinian rights in the first place, or that the leadership knew its members would not be motivated to. After all, “progressive except Palestine” is the miserable norm in German left-liberal circles.

This shameful episode serves to highlight the sorry state of human rights in Germany. In this country, even a massive international organization putatively dedicated to the rights of all human beings everywhere cannot help but set aside the rights of Palestinians.

Sacrificing Palestinian rights appears to be the price for public legitimacy in Germany. But activists like those in Amnesty are neither victims nor passive participants in this travesty. This state of affairs persists in part because even they are all too willing to keep paying that price. Yet ultimately, those who pay the greatest price are the Palestinians, made to bear the punishment for Germany’s historical crimes under Israeli apartheid — with unwavering German support.

Michael Sappir is a leftist writer and organizer from Israel, based in Leipzig, Germany. He studies philosophy and writes a regular column on Local Call. Twitter: @msappir.
Since you’re here…