The first time I got called a sandnigger I was one semester into an English Lit. degree at the University of Tennessee, where football — the kind that involves hands — was a game more urgent than war. 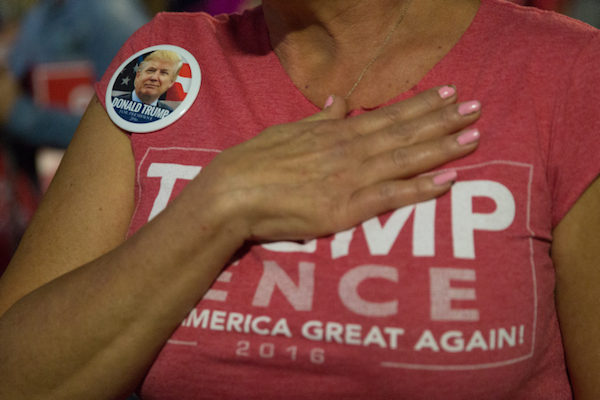 A woman holds her hand to her heart at a Donald Trump campaign event in Berwyn, Pennsylvania, November 3, 2016. (Noam Revkin Fenton\Flash90)

In August of 1990, I said goodbye to my Palestinian family and set off to attend college in Chattanooga, Tennessee, where 18 years earlier, my mother had given birth to me. That I was born in that unlikely place was an accident of fate. My mother and father had arrived by way of a family friend, who, after the 1967 war, had earned a professorship at the Chattanooga campus of the University of Tennessee.

My parents didn’t stay long, though. Just before my fourth birthday, they moved to the United Arab Emirates for the first time, toggling back and forth throughout my childhood between Abu Dhabi and places like Scranton, Pennsylvania or Springfield, Virginia. They eventually settled in the UAE for the better part of a decade, but in our on-again, off-again experience with America, I gained enough insight into the country to wonder whether we would ever truly fit in there.

Still, I wanted to fit. Newly returned to Chattanooga as a college freshman, I found a job at a pharmacy owned by a Palestinian immigrant from the Galilee. “Abe,” as he was known, had come to the American south in the late 1960s, to study and, later, to marry. His customers adored him, almost as much as his old-fashioned soda fountain, with its homemade tuna melts and root beer floats.

They didn’t seem to know that Abe had one glass eye and cataracts in the other, or that he sometimes relied on me to read the small print on prescriptions. One morning, a woman I had never seen before stepped up to the counter and handed me one such prescription, with its usual doctor’s scrawl.

By that point, a few weeks into the job, I had become adept at making out the names of various drugs and their generic equivalents, even recognizing their uses. This one was a diuretic, and by her complexion, I figured our new customer had some sort of heart problem.

I walked around the counter to hand Abe the slip of paper, but before he could reach for the bottle of Lasix, the woman began to yell at me, demanding I return her prescription. She spoke with the sternness of a young mother who had just seen her child bullied. As I handed her the prescription, she pointed to a ceramic plate hung above the register and asked me, in a panic, what it said.

Hearing this, she promptly stormed toward the store door, letting loose along the way a sequence of words I had never heard before:

I hope you sandniggers all rot in hell.

That was before any American soldiers had died in Kuwait or Iraq, before 9/11, before Afghanistan or Libya. I was just one semester into an English Lit. degree, but I had already learned that, in Chattanooga, there were other things more urgent than war.

I first learned this lesson on a Wednesday, just after my 18th birthday, when my college dormitory erupted in cheer. It was the first night of Operation Desert Storm—January 16, 1991—and George H.W. Bush had just ordered U.S. jets to bomb Baghdad.

To hear CNN’s Wolf Blitzer tell it, what made that day remarkable was that “people could watch a war unfold live.” The Cable News Network was a novelty at the time, the first of America’s 24-hour news channels. And when the war broke out, CNN suddenly became more popular than football.

As the American air campaign began, the new station was broadcasting live footage from Baghdad. Saddam’s anti-aircraft guns were sending crackles of light into the night sky while Peter Arnett narrated the scene from the Al Rasheed Hotel. It was, according to a popular refrain, “like a video game” — the first American war broadcast in real time for all to see.

But in my dormitory, there wasn’t any “shock and awe.” It was more like hysteria, the kind on display when your hometown sports team has just defeated an odds-on favorite. I remember walking out of my room to see a scrum of post-pubescent boys grasping cans of cheap beer, their arms raised and chanting: “USA! USA!”

At that moment, my family was split between the West Bank, Kuwait, and the UAE, windows sealed and gas masks at the ready. No one else around me, not even my American roommate, seemed to care that there were real people being bombed or that the target was quite literally the cradle of civilization.

It was the first time I realized just how oblivious Americans can be to their government’s unbridled capacity for destruction.

Sure enough, 10 days later, the boys had forgotten it all, as they huddled around their television sets to watch the New York Giants defeat the Buffalo Bills in Super Bowl XXV. Whitney Houston led with the national anthem, and the game was decided by a single point. It was, by all accounts, a clincher, and despite a halftime news report from the late Peter Jennings, war seemed to be the last thing on anyone’s minds.

When CNN, a decade later, aired footage of Palestinians it said were “celebrating” the September 11 attacks, I thought back to that day in 1991 and wondered if any of my college classmates would connect the dots. I don’t know if they did. But I doubt it.

What I do know is that, 25 years after America’s first overt war in the Middle East, many of my former dorm mates will likely be voting for Donald Trump. The Republican candidate leads his Democratic rival by 11 points in Tennessee, where my alma mater will be hosting a military appreciation day at its next football game, on November 12th.

At its best, football is a game of intricate plays mapped out on a 100-yard gridiron like a battlefield. But real battles are no spectator sport. That, perhaps, is why the spectacle of America’s presidential election — in which people who look like me have been targeted, even killed — seems a more morbid affair than just democracy at play.

As the election approaches, I am nervous, but I am not surprised. Despite my English degree and my desire to fit, I know I will always be just a sandnigger to some. Come election day, I will continue to hope that they are the minority.