facebook twitter email link
Luis Moreno Ocampo has a big decision to make: should he recognize the Palestinian territories as a state? 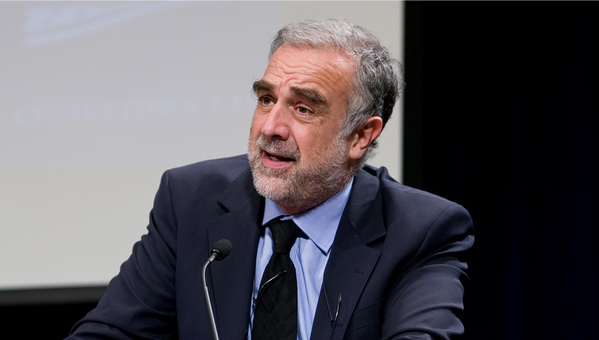 Luis Moreno Ocampo (Photo: Ralph Alswang)
One of the most important decisions concerning the Israeli-Palestinian conflict in the near future could soon be made not by a local leader (not surprising), but by an Argentinian lawyer.

Meet Luis Moreno Ocampo, the first Prosecutor of the International Criminal Court (ICC). Israel, along with the United States and Sudan, ratified the Rome Statute which created the ICC – only to later “unsign” themselves. But this past week, Ocampo heard Israel’s case against a Palestinian strategic move that could change the course of the conflict.

Moreno Ocampo is a human rights lawyer, and his résumé includes bringing to trial senior Argentine junta commanders from the period of army rule in the 1970s and early ’80s. He has also been a visiting professor at Stanford and Harvard. During his career in Argentina he’s represented Diego Maradona, former economics minister Domingo Cavallo, and even a priest accused of sexually abusing minors.

In 2003 he was appointed the first prosecutor of the ICC for a term of nine years. Since then he’s invested most of his efforts in prosecuting war crimes in Africa, mainly the Congo and Darfur in Sudan.

Moreno Ocampo’s tenure has been plagued with criticism pretty much since day one. His office has been swamped with requests to open investigations, and some of his critics say he’s too interested in media coverage, too slow to react and albeit a talented lawyer – not the best of managers.

One example of this is the case of a worker in his office who complained of sexual misconduct against Moreno Ocampo. An internal investigation of the ICC found the complaint to be nonsense, but Moreno- Ocampo immediately fired the worker and was reprimanded for this, since he had a personal interest in the matter.

The prosecutor has also been criticized for targeting mainly African issues, and mainly for his handling of Sudanese dictator Omar al-Bashir. As Barbara Crossette of The Nation reports:

Mahmood Mamdani, Herbert Lehman Professor of Government at Columbia University and the author of “Saviors and Survivors: Darfur, Politics and the War on Terror”, is a leading critic of the court. Mamdani argues that its prosecutor has failed to understand or acknowledge the history of the conflict in Darfur and has glossed over the complexities of the situation to create a simplistic and unfair case against Bashir.

Alex de Waal, a British researcher on African politics, claims that Moreno-Ocampo was wrong to charge Bashir with genocide, since there isn’t enough evidence in that case to prove him guilty:

For nineteen years, President Bashir has sat on top of a government that has been responsible for incalculable crimes. Hundreds of thousands of Sudanese citizens have died in violence, or been starved or rendered homeless, or have been tortured or otherwise punished. The head of state must bear much responsibility for these countless crimes committed by those who profess their loyalty to him. Two weeks ago, Moreno Ocampo succeeded in accusing Bashir of the crime for which he is not guilty. That is a remarkable feat.

But now is Moreno Ocampo’s chance to turn his attention to the Middle East. There are three ways to approach the ICC: a referral from the UN Security Council, a request by a nation that is a full member of the court or directly by the prosecutor, acting alone or on the request of others. After Operation Cast Lead, the Palestinians took the latter and addressed the ICC, asking it to act against what it claims are Israeli war crimes. They stated that the Palestinian Authority “recognizes the jurisdiction of the Court for the purpose of identifying, prosecuting and judging the authors and accomplices of crimes committed on the territory of Palestine since July 1, 2002.”

If indeed Moreno-Ocampo decides to investigate, the ramifications would be huge. The decision alone would be much more important than the investigation itself – it would mean the ICC was heading towards recognizing the Palestinian territories as a state.

Last week, both sides held a debate at the ICC in front of Moreno-Ocampo on the issue. Dore Gold, a Netanyahu advisor, was one of the representatives arguing Israel’s case – even though, as mentioned before, Israel has “unsigned” itself from the Rome Statute.

Gold is taking this move by the Palestinians very seriously, as the Jerusalem Post has reported:

According to Dore Gold, head of the Jerusalem Center for Public Affairs and one of the participants in the debate, a decision by the court prosecutor to accept the declaration would have “huge implications. It amounts to an official request by the PA that the prosecutor confirm that it be considered a state. Even if the recognition will only apply to the ICC,” he said, “it will trigger a process of unilateralism which the PA is already considering which will undermine the peace process.”

Moreno-Ocampo has yet to give any indication which way he’s swaying, but in an interview to the online magazine Guernica, he said in March 2009, shortly after the Palestinians referred to the ICC:

But even if Moreno-Ocampo decides to prosecute the case, his decision would still have to be approved by the ICC further down the road, a process which could take many months. And his own decision is not expected for weeks.

For Moreno-Ocampo, labeled by Time magazine the “Don Quixote of Darfur”, this decision could be of great importance. He is obviously a man with human rights and dealing with war crimes on the top of his agenda. But will he be the one to give Palestinian statehood the push it needs?