In response to ‘Jewish’ terrorism Israeli authorities are taking some of the worst tools used against Palestinians and applying them to everyone. Thus Israel-Palestine went from a place where half the population is denied basic rights to a place where anybody — Jew and Arab alike — can lose them at any time. 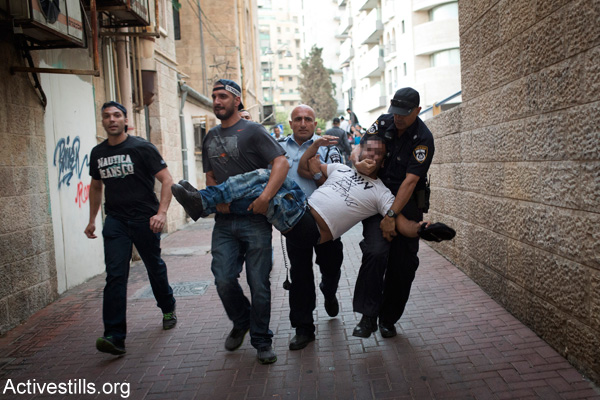 Illustrative photo of Israeli police arresting a right-wing activist wearing a T-shirt that reads ‘Death to the terrorists’ in West Jerusalem. (Activestills.org)

The problem with anti-terror laws is that they are always legislated in the wake of unimaginably horrifying terror attacks.  In one such attack last week, extremist Jewish settlers attempted to burn an entire Palestinian family alive in their sleep, and succeeded in murdering a small baby.

On Sunday, Israel’s cabinet announced that it was authorizing law enforcement and intelligence agencies to almost completely disregard the civil rights of citizens suspected of crimes that constitute terrorism. According to one report, the government is even considering authorizing the use of torture to prevent further attacks.

Jewish and non-Jewish Israeli citizens can already be — and are — denied access to legal counsel, held incommunicado and be accused with secret evidence when the authorities decide it is expedient. First legislated 70 years ago, administrative detention — including against Israeli citizens — was cemented into Israel’s law books in 1979. And Israel’s Supreme Court green-lighted “moderate physical pressure” (read: torture) over 15 years ago.

In other words, the laws and regulations authorizing the government to selectively disregard the civil rights, due process and human dignity of the people under its control are already on the books. And the government is already comfortable doing so.

So what’s the big deal, you ask? What changed? Why are we talking about this as if it’s some major shift in policy?

Indeed, every government in the history of the State of Israel has used “emergency regulations” against the non-Jews living in its various jurisdictions — specifically, against Palestinian populations. Emergency regulations are sets of laws that, during legally prescribed situations of unrest, allow for basic rights to be disregarded in the name of public order and safety. Israel has been under a self-declared state of emergency and its emergency regulations have been in force since May 15, 1948.

From 1948 until 1966, Israel used emergency regulations to rule its own citizens of Palestinian descent under a military regime. Non-Jewish citizens of Israel were denied freedom of movement, occupation, and political expression and the authorities regularly used administrative detention against them.

Less than a year after the military regime inside Israel ended, the Israeli army began ruling the Palestinian populations of the West Bank and Gaza Strip. (The legal situation of the occupied populations of East Jerusalem, the Golan Heights and, the Sinai Peninsula before it was returned, is slightly different.)

For those populations, Israeli authorities feel no obligation to uphold, protect or guarantee civil liberties. For Palestinians in the West Bank, there is no right of political expression, freedom of movement, legal representation and only limited due process. Some of those things might exist for some Palestinians some of the time, but they can be taken away at will. And anything that can be revoked on a whim is not a right.

Palestinians from the village Duma gather at the Dawabshe house, the scene of an arson attack by suspected Jewish settlers. Ali , 18 months old, was burned to death in the attack. His parents and four-year-old brother are currently hospitalized in Israel in serious condition. (photo: Oren Ziv/Activestills.org)

In the aftermath of the abhorrent murder of a Palestinian baby last week, public figures, journalists and regular people have been calling on the government to treat Jewish terrorism suspects the same way it treats Palestinian terror suspects.

Use administrative detention, demolish their families’ homes, do whatever you need to do to get confessions out of them, the logic goes. Terrorism is terrorism is terrorism, and any tools that are appropriate for Palestinian terrorism are good enough for Jewish terrorism. (There is a limit to these calls, of course. Read Noam Sheizaf for more on that.)

And it’s actually a compelling argument if you never regarded the denial of basic civil rights to Palestinians as problematic in the first place.

After all, if you support the denial of rights to one group of people solely because of their nationality or ethnicity that would imply racism. That would suggest apartheid. That’s not a light unto the nations, at least not unto the nations with which we want to be associated.

And so in the name of ethnic and racial and religious equality, Israel-Palestine goes from a place where half of the people are denied basic rights and dignities, toward a place where anybody — Jew and Arab alike — can lose them at any time.