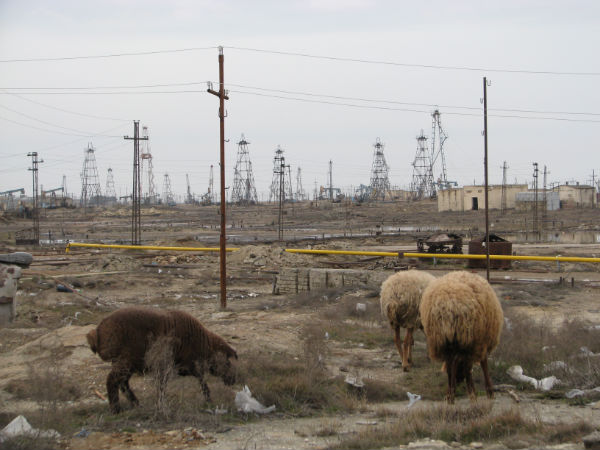 There’s a wonderfully fond post about Azerbaijan in the works, but must precede it with this one – the sort of thing that might get me into trouble at the airport on the way out. It has to do with a realization that I had here, a satori of sorts, about what this place and my home have in common.

You see, I’ve been to the forbidden zone, and what I saw upset me so much I can’t go out for a pint now. I didn’t even intend to go there. My plan for the day was to visit the islands at the tip of Baku’s peninsula. I went over to the passenger port, which is surrounded by towering new residential projects, intended for foreigners. Only two boats were docked there, both state of the art vessels marked with the British Petroleum logo. The attendant inside the terminal explained that only oil personnel and government officials are allowed on the islands.

So I decided instead to visit a place mentioned yesterday by an Azeri friend: the ancient site of Atasgah, where the believers of Zaraoster (Zarathustra) worshipped fire for millenia. The metro took me to the outskirts of the city, then a Lada cab completed the trip to the town of Surakhani. It turned out to be quite a dour little place, a striking contrast to the boomtown heart of Baku, where glass skyscrapers shaped like sea waves are rising over streets as neat and ornate as Munich’s.

Atashgah itself was beautiful: a peculiar walled shrine within which fire was indeed burning. Having taken in its unique power, I headed out for a walk in the neighborhood. Unpaved roads would trouble no one who’s been to the Azeri countryside. The village of Shemkir in the west of the country, where I was hosted on my first night here, boasts not a single paved or lit street and is indeed a pool of mud during this season.

One learns to accept mud in Azerbaijan. There’s no other choice. Here in Surakhani, however, much of the mud was black and smelled of unrefined petroleum. Past the town’s unpainted, gloomy abodes spread a vast, barren oil field, spiky with towers and busy with the quiet, constant motion of pumps, bending as if in prayer.

Among the wells was filth, a lot of it. There was trash there by the megatons, piled high in spots and spread freely in others. Over this trash, in the gray winter sky, flew a helicopter, making sure that no one was harming the flow of big money into mostly un-Azeri pockets. Within the trash, was a local gentleman, wearing an army coat he must have nicked during reserve service on the Karabach front. He was herding his sheep, only three, Not quite a herd, and they were feeding on filth in the ugliest landscape imaginable.

On seeing me taking photographs, the shepherd approached and asked that I stop. It is forbidden, he explained, in a mix of basic Turkish and Russian I could comprehend. It saddened me that this man, who gets nothing of his village’s riches except for the pollution they produce, would cooporate with the powers that be and ban my lens from the landscape, but having already been held by the police for taking photos at the railway station, I turned the camera off obediently and returned to the ritzy city.

Now I’m here. It’s Saturday night and I should really hit the bars, especially the friendly “Otto”, where I had such a fine time last night. Thing is, I just can’t. After seeing such injustice, one finds partying a little difficult.

There’s great value in this moment. I finally understand what foreigners may feel like in their Tel-Aviv or West Jerusalem hotels after having gone on a tour of Hebron guided by “Breaking the Silence”, or even after simply passing a checkpoint. The gentleman in Surakhani is as much a victim of an opressive government as the Palestinian who is subject to the occupation. The system of power which keeps him this underprivilaged transcends the Aliev regime that controls Azerbaijan, it is an international story just as our is. Here the game is oil, back home it is strategic control of the region and a stake in God.

If the dispossesed of different lands have any power, it is the power to cause disquiet in the heart. Surakhani has left its mark and taught a lesson.