A statement of support for two Israeli anti-occupation activists, who continue in their courageous struggle for democracy and justice in the face of growing hostility and violence

By Ben Elkind and Simone Zimerman 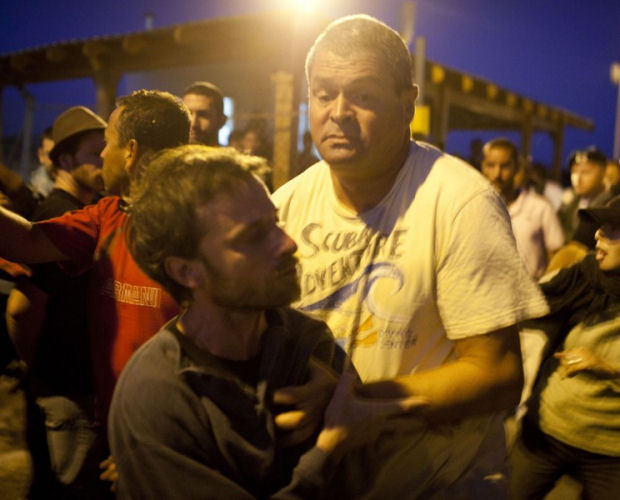 Policeman and settler Yossi Ben Arush attacks a protester in the settlement of Anatot (Photo: Activestills)

On Friday, September 30, 2011, a violent mob attacked Assaf Sharon and Sara Beninga in the Anatot settlement outside of Jerusalem.  Reportedly, during the attack, police stood idly by and watched. Though badly beaten, Assaf and Sara remained fervently committed to democracy and social justice.  In response to the violence at Anatot, my friend Simone and I wrote this letter expressing our solidarity with Assaf and Sara.  We have since been joined by more than 100 students across the country (You can stand with Assaf and Sara too.  Add your name by clicking here):

We are humbled writing to you with the knowledge that as we celebrated the new year and the Jewish holidays here in the United States, your Rosh Hashanah in Israel was neither good nor sweet. We are frustrated knowing that our words cannot repair broken bones or ease bruised faces, yet we are compelled to speak.

This is what we understand of what transpired in Israel on Rosh Hashanah:

On September 30, you travelled to the settlement of Anatot, just outside of Jerusalem. A Palestinian farmer owns land in Anatot, and asked members of Ta’ayush – an organization that has gained respect and acclaim for its non-violent activism – to accompany him in planting trees on his land. He and members of Ta’ayush were met with violence, both physical and verbal.

Later that evening, you and other activists from the Sheikh Jarrah Solidarity movement joined Ta’ayush outside Anatot’s gates to protest the violent confrontation from earlier in the day. You were set on by Anatot residents, including, according to some reports, off-duty policemen. Police were passive as the violence ensued. Media coverage in Israel was minimal, and in some cases sought to portray all of you as instigators deserving of this horrible violence.

We watched the video you posted of the event and were frozen in horror seeing you – Assaf – chased, grabbed, beaten to the ground, bloody, defeated. We read, Sara, of your despair, “when basic human solidarity, empathy… evaporates. Women cheer to chants of rape, and men turn into uncontrollable animals,” and your sense of abandonment by, “‘the law’… which I truly needed [as] defense… from a fervid mob just waiting to drag me into a corner and make me disappear.” These images and words have been on our minds since we saw and read them. We are disturbed, confused, frustrated and searching for ways to support you and struggle alongside you, from across the world.

You have helped transform the way we look at this conflict, so as much as we are inclined to despise those who attacked you, it is your model that prevents us from doing so. Martin Luther King Jr. wrote, “The nonviolent resister not only refuses to shoot at his opponent but he also refuses to hate him. At the center of nonviolence stands the principle of love.” You embody this value as you protest against a system of occupation, discrimination, and dispossession – and not against settlers themselves. You insist on viewing your attackers in terms of a political context for which we are all responsible.

And it is, ultimately, that responsibility that binds us in the United States together with you in Israel. You are a constant demonstration to us of the democratic spirit within Israel that we cling to as inspiration. You help show our friends who are unfamiliar with the discourse within Israel that not all Israelis support the Occupation, and that a love of Israel can live alongside a deep commitment to democracy and social justice. And so, in this attack, we see not only the suffering of our friends and role models, but an attack upon the Israel we love.

We have been taught to celebrate Israel as the “only democracy in the Middle East.” What happened to you does not fit easily into this picture. And yet you illustrate with your work that democracy is always an unfinished project. You remind us that Israel requires neither salesmen nor PR marketers, but what our parents and grandparents were: people working diligently to make Israel a land of prophecy, a land that can truly be a light unto the nations. So even in the darkest of nights, such as the one you experienced in Anatot, you provide for us the continued hope that such a light lives on. And as you organized another return to Anatot last weekend, we are moved by your perseverance and courage.

As we left the Day of Atonement, carrying with us this challenge to do t’shuvah and mend the wrongs in our lives, and as we observed the festival of Sukkot, the lessons of the Jewish calendar mirror our challenge and our hope. The sukkah is a temporary dwelling where we abandon the normal comforts of every day life and remind ourselves of what is most important and most fragile, vulnerable, and temporary. The sukkah is also a place to invite guests, guests who can be with us both in person and in spirit. In our sukkot this year your stories were with us, reminding us of what is fragile. Your spirit will continue to be in our holy spaces, and we will gain renewed motivation, indignation, and hope from your example. And while we cannot march with you to Anatot, we can, with these words and this letter, say to you and to our community: we are with you, in solidarity.