Addressing Christian Zionists who brush aside the occupation by saying, ‘it’s complicated,’ an American Evangelical writes: ‘Injustice is only complicated to those who don’t suffer from it.’ 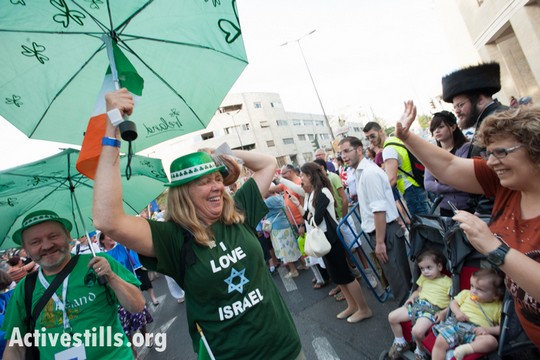 What would Jesus do if he were standing at a checkpoint in Israel/Palestine today? Asked that question one year ago, I would have given you a blank stare. Growing up as an evangelical Christian, I thought of Israel only as a Bible-place of God’s chosen people, quaintly holy and surely blessed. Checkpoints, occupation, Palestine – these words meant nothing for most of my 22-year-old life.

Today I write from Bethlehem at the end of “Christ at the Checkpoint,” a Christian conference that asked “WWJD?” in context of the Israeli-Palestinian conflict, and I have an answer.

The question is complicated, as is any discussion of Israel and Palestine in America. I studied the Middle East at Princeton and Oxford, where my classes were objective, historical and politically correct. I swallowed timelines and parsed narratives, but never wanted to make a value judgment on the situation. In my eyes, Tigers for Israel and the Princeton Committee on Palestine were akin to College Republicans and Democrats. Both had valid points and interesting arguments, but no one was right or wrong. Both groups also seemed very emotional, and I wasn’t one to get swept away with radical types.

Then I graduated and came to the Middle East. I first visited Israel and Palestine last August, after a summer of Arabic study in Oman and before moving to Jordan. I wanted to see things for myself but kept my eyes narrowed, wary of activists’ exaggerations.

Instead, I found an occupation; a deliberate power imbalance where the weak were daily stepped on by the strong. Israel’s being “chosen by God” somehow exempted it from international law, basic human rights and the command to love our neighbors. My church and state saw innocent people illegally hurt and beamed in approval.

This went against everything I knew about Christ’s teachings. I came expecting to find suffering but not systematic injustice, and never any Wrong in which my country, church and self were complicit. I felt shocked, confused, and used.

My friends in Jordan are always astonished to hear that I went to the best school in America, but never knew that there is ongoing oppression in Palestine. “I thought it was complicated,” I tell them.

Living here, I’ve learned that injustice is only complicated to those who don’t suffer from it. In faraway America, I’d confused myself with semantics and details on who shot what or signed which treaties when and where, and why this or that made occupation reasonable.

But nothing is complicated to my arbitrarily detained friend in solitary confinement, to the mother whose baby cries from tear gas, to the man who has lost three daughters in a second’s bombing, or to the child who is afraid. Nitpicky suspicions fall apart when I face their eyes and stories. I am ashamed that I ever thought violence might be justified in the ostensible name of God.

At the conference, one older British woman told me she was a Christian Zionist.

“It’s wonderful that Jesus said we are to be peacemakers,” the woman said, brushing white hair back with wrinkled hands. “But I’m afraid.” How can we give up land to Arabs who are bloodthirsty terrorists, she asked? There are too many Muslims wanting to destroy the West, she said, in Israel and in Europe, feeding off welfare systems to plot suicide bombings behind closed doors.

“I like this conference but have trouble applying what we hear,” the woman said. She’d lived in an Israeli settlement for 10 years, working for Christian Friends of Israel. “I want to feel for Palestinians as I do for Jews when they are dying or hurt. I want to feel for children, women, civilians…” Suddenly she was crying. “Oh, dear, I’m sorry. I’m not quite there, but I want to be. Do you understand?”

I did. It can’t be easy to stake your life on something and see it flipped inside out, I thought, remembering an Israeli friend who’d changed his thinking after a gap year in Tibet. “The Tibetans live there with their language, religion and culture. It’s all Tibetan,” he’d told me, face wrenched, words slow. “But the people in control are all Chinese. Another race is in charge. I thought that was so wrong. Then I felt upset, because like, you know, it was sort of, it reminded me of what we have here.”

Questioning one’s belief system hurts. An Omani friend once told me that he’d woken up every night at 4 a.m. for two weeks, crying, when he converted to Christianity. “It felt like I was ripping off my own skin,” he said.

“Can we pray together?” I asked the woman, and we did.

Globalization is a gift to my generation. We don’t believe people in other countries are so different that we can treat them as lesser humans. A surfer friend in Tel Aviv once asked me: “What are the Arabs like? Do they drink? Smoke?” I laughed, telling him about my Jordanian friends who Instagram their parties, struggle with their sexual orientations, play flamenco guitar and wish they could just make music instead of being engineers and accountants. We are young, we are the same, we all just want to live. Our generation knows this.

Yet relating to one another is not enough. Before coming to the Middle East, my American millennial privilege had made me globalized but desensitized to suffering. I knew injustices existed but was too busy writing Facebook statuses about my thesis to examine them. I enjoyed feeling like a generally good person and skirted around sensitive questions that might threaten my career or upset my worldview.

Here, I’ve learned that people suffer when the privileged are ignorant or apathetic. Millennials like humanitarianism. We Tweet about Syria, work for nonprofits and glory in social entrepreneurship, all of which I love. But what if we microfinance a rural woman’s handicraft business, and then a drone kills her and her children? Seeking justice must extend beyond doing Good to also checking ourselves for Bad. We must ask harder questions, dig deeper into our state and military’s actions, not to undermine America but because we love her.

Having seen the occupation, I believe it is unjust and must end. I am not against Israel, America, or evangelicals. I just don’t want policies that hurt people in my church and nation’s name without our understanding or consent.

Conservative evangelicals may call me naïve. My response is not argument but invitation. I grew up in Asia, so when Americans ask if Shanghai is a Communist rice field, I laugh and ask them to come look around for themselves. When others say Palestinians are hateful and all Arabs want to push Israel into the sea, I again say, come and see.

As a follower of Christ, I believe that God stands with the oppressed. But oppressors are themselves oppressed by insecurity and fear. I’ve heard many Israeli and American friends speak out of terror: the Communists will get us! The jihadis will bomb us! The non-Western world lives in cultures of hate that will crush us the moment we let them, so we’d better crush them first!

If Jesus were here today, I believe he would pierce these lies in a second. They are so flimsy against the truth that man is man, filled with dignity, and no one is less human or less fiercely loved by our God than another. I believe Christ can and will free the oppressed by freeing their oppressors from fear.

But we must first commit to seek truth, relentlessly and humbly. I speak to Americans, Christians, and especially my generation: friends, political vitriol and religious rhetoric are distractions. Let us choose honesty over comfort. Let us ask questions even if they lead us to give up our privileges. Let us be smart and let us be brave – above all, let us be human.

Alice Su graduated from Princeton University in 2013. She now freelances as a journalist and works with refugees in Amman, Jordan. Follow her on Twitter at @aliceysu.

Related:
PHOTOS: In fight against the wall, does Cremisan have a prayer?
New law dividing Christian, Muslim Arabs legalizes inequality