The two-state solution, imperfect as a final-status agreement, could still be a crucial stepping stone toward achieving a more comprehensive formula for equality and just peace that everyone can live with. 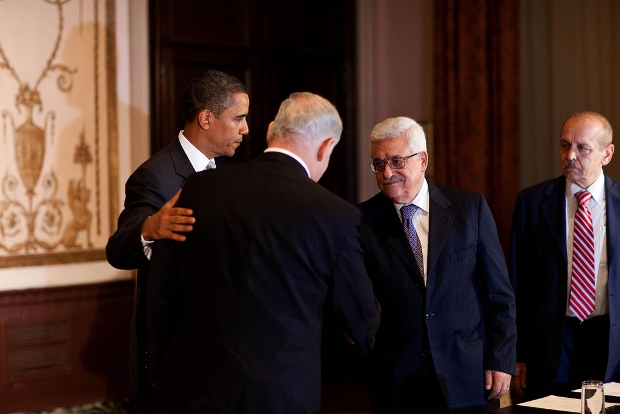 It has been a long time since I’ve heard someone make an optimistic case for the current round of peace talks. Insiders, observers and outliers on every which side of the political spectrum in both Israeli and Palestinian society have every reason to smell failure in the air. History alone makes the strongest case for why the current American-led peace process is doomed. Add the on-the-ground reality into the mix and you’ve got a dismal picture.

To quote former settler leader and two-state opponent Dany Dayan, “20 years after Oslo, the burden of proof is on [two-state] believers, not me.”

But whereas Einstein once defined insanity as doing the same thing over and over again and expecting different results, the truth of the matter is that few people have accurately predicted some of the most dramatic and world-changing events in modern history.

Addressing the pessimists among us, first and foremost Israeli Prime Minister Netanyahu, U.S. President Obama said in an interview published Sunday: “If [Netanyahu] does not believe that a peace deal with the Palestinians is the right thing to do for Israel, then he needs to articulate an alternative approach. And as I said before, it’s hard to come up with one that’s plausible.”

Of course, there are other options. The most popular alternative is one, liberal democratic state in which Israelis and Palestinians live on the same land and enjoy equal citizenship under the law. Such an outcome means the end of the exclusive ethnic nation-states of Israel and Palestine as we understand them today, but it does not preclude the resultant state from serving as a homeland for both peoples. In public opinion polling over the years, a one-state solution has consistently received the support of around one-third of both Palestinians and Israelis. This is neither side’s first choice, but it is an undeniably close second.

There are also other, less-discussed alternative frameworks beyond the two- and one-state solutions. It is true, as President Obama said, that they are not plausible, but that is only true because those ideas have not benefited from the same resources and investments necessary for developing and marketing them in the same way the two-state solution has.

For two decades, think tanks, academics, politicians, diplomats and civil society activists have all pushed for one idea, two states, while vigorously discounting all others as implausible.

A few years ago I wrote a series of articles exploring alternatives to the two-state solution as we understand it. (Read parts one, two and three.) Among them are ideas for a federation structured in any number of small administrative districts, and a rethinking of the modern concept of state sovereignty into a parallel states model, in which two states exist in a single geographic territory.

So why bring up alternatives to a peace process that I am arguing should be given one last chance?

The truly flawed aspect of the two-state paradigm is the insistence that such an agreement constitute a conclusive end to all claims and a final resolution to the conflict. If one accepts that argument, then the two-state solution is only doomed as a framework for a catch-all solution meant to herald in an era of peace and coexistence — or as liberal Zionist speakers love to metaphorize the conflict, an Israeli-Palestinian divorce.

But if the two-state solution is not the resolution to the conflict, it could still be an important stepping stone toward a final resolution. The two-state solution could still be the best solution right now, regardless of whether it leads to ever-lasting peace and harmony. Both Israeli and Palestinian societies are plagued by conflict-driven hyper-nationalism, and any resolution that does not physically separate the two sides must be preceded by an end to violence. It follows then, that after a few decades of living in two states, should such a situation emerge, Israelis and Palestinians could foreseeably decide that it is in both their interests to form a single liberal democratic state, or any other alternative arrangement that addresses the remaining issues of conflict.

The Israeli-Palestinian conflict is a vestige of a bygone world order in which achieving national self-determination was more highly valued than individual self-determination, expressed through human and civil rights. To recognize that is to understand that ending the occupation and laying the groundwork for realizing individual rights is more important than creating or preserving the nation-state as an exclusive political home for one nation. Therefore, the number-one priority in the Israeli-Palestinian conflict should be ending the occupation and ensuring equality for everyone between the river and the sea, be it under one, two, three or no states.

If pushing through a two-state solution can move us toward that end goal, even as an interim measure toward a more just and lasting solution, then maybe it’s worth investing and believing in.

Related:
For the sake of peace, it is time to put an end to negotiations
Beware, J Street: The Kerry deal looks rigged against the Palestinians
What does Bibi actually want?