A Palestinian resident of the Tel Aviv city-state publishes a nasty racist letter from an anonymous neighbor, and becomes a local celebrity.

Ziad “Zizo” Abul Hawa was thrust into the local media spotlight this week when he discovered that one of his neighbors wanted to get him evicted from his Tel Aviv apartment because she didn’t think it was safe to have an Arab in the building. The neighbor, who still has not been identified, left an unsigned note pinned to the notice board in the lobby of his building.

To the Tenants of 51 Bar Kochba Street,

Due to the security situation I don’t think we can allow ourselves to be indifferent and do nothing about the fact that there is an Arab residing in our building. His name is Ziad Abul Hawa and he lives in Apartment 4. This is something that I have long sought to discuss with the Tenants’ Association, even before the current situation.

Now is the opportunity.

I invite you all to a meeting in the bomb shelter on the first floor, this coming Thursday October 15, to discuss the situation and decide what can be done.

I’m not rejecting him outright, but I do think we should talk to him and check him out.

We have the right to be concerned about our safety and the safety of our families and to feel secure in the building we live in.

Yours,
The Apartment Tenants 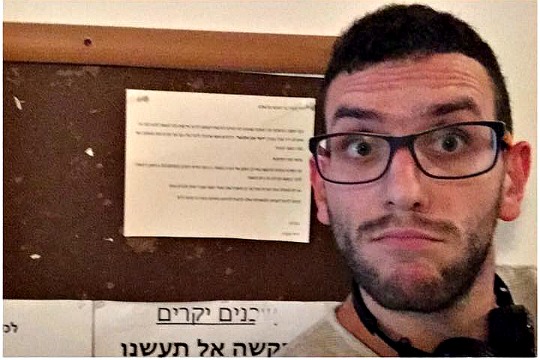 Ziad, who has gone by the nickname Zizo since he was a child, took  a selfie that shows him making a wry duck face, with the note behind him, and posted it on Facebook with the humorous Hebrew caption, “Ya! I’m coming with mulukhiya muffins.”

The photo went viral almost immediately, with so many people tagging him when they shared it on Facebook that Zizo’s original status was soon buried, along with comments that combined expressions of disgust for the anonymous neighbor and support for Zizo, almost all written in Hebrew. Some other neighbors in the building tore the notice down and replaced it with a satirical one that mocked the anonymous original; others sought him out to apologize. By the following day he had been interviewed for nearly all of the major Israeli media outlets, speaking in flawless idiomatic Hebrew, and had turned down an invitation to be a guest on a popular morning magazine program. Meanwhile, there was growing momentum in the comments on his wall for a protest demonstration outside his building on Thursday, to coincide with the meeting of the tenants’ association.

Now just a few days shy of his 28th birthday, Zizo moved to Tel Aviv about nine years ago from East Jerusalem, where his parents live and where he attended high school. But he was born and raised in Barcelona, where his Palestinian father met and married his mother — a Syrian from Damascus.

“I only learned Hebrew seven or eight years ago,” he explained in fluent, unaccented English. “In an ulpan,” he added, referring to the intensive Hebrew language courses offered to new immigrants. After he moved to Tel Aviv, where he works for an insurance company, he applied for and was granted Israeli citizenship. “I did it because it makes my life easier,” he said (although he is still subjected to the humiliating “special treatment” for Arabs when he flies on Israeli airlines or out of Ben Gurion Airport, as he describes in an article for the Jerusalem Post).

Israel’s citizenship laws regarding Palestinian residents of East Jerusalem are a bit murky and seem to be applied capriciously. The government says Palestinians who became residents of the country’s “eternally united” capital city when Israel occupied the territory in 1967 can apply if they wish, but many refuse to do so for reasons of Palestinian nationalism. The truth is, of course, far more complex. It’s true that few apply, but some Palestinian acquaintances told me they have submitted applications that were refused.

“I applied in Tel Aviv,” responded Zizo, explaining that applying at Ministry of Interior offices outside of the capital made the process much easier.

“I did it because it made my life easier. I don’t hate Israel anyway,” he added. “I’m mostly happy living in Tel Aviv. I have a great job and amazing friends who are like family to me. On a day-to-day basis there are some incidents, but that could happen anywhere.” Sounding like a European transplant to New York speaking about the United States beyond Manhattan or Brooklyn, he said, “If I am going to live in Israel then only in Tel Aviv.”

He is not apolitical. “Politically I have fought with almost all my friends,” he said. “Arabs think I am too pro-Israel and love Jews too much and my Jewish friends think I am anti-Zionist and pro-Palestinian.” Yes, he does suffer comments like, “you don’t look like an Arab” (“people don’t even understand how insulting that is”). On the other hand, he says he knows “lots of people who generalized about hating Arabs and stuff but then they told me that after they met me they changed their point of view.”

The walls of the famous Tel Aviv bubble are not as impermeable as many would like to believe. Last week, for example, a young woman from Haifa, a student at Tel Aviv University, was assaulted and narrowly avoided a serious beating at the hands of a mob after her taxi driver, hearing her Arabic-accented Hebrew, accused her of being a terrorist and threw her out of his vehicle in a working class area in the south of the city.

But Zizo has carved out a place for himself in a bubble within the bubble. Last week he married his long-time boyfriend, a Jewish man named Yossi from the Haifa suburbs. There were 200 guests at their wedding ceremony in Jaffa (“which is a small wedding by Israeli standards”), but parents could not be present. Since they live in East Jerusalem, they felt it was too dangerous to travel given the security situation in their city. But his brother, a Barcelona resident who had to struggle to get a visa for Israel because he has only a Jordanian passport, did attend the celebration.

Today, Zizo published another letter from a neighbor on his Facebook wall. But it’s quite different from the one that started this whole story. He appended the following caption (in Hebrew): “The best letter I’ve ever received. Someone just put it in my mailbox.” In English, he adds, “Faith in humanity restored.” The envelope, decorated with a little heart, says, “Something that might make you smile (it’s not anthrax).”

Ziad. Hi. I don’t really know what to write. I threw away my first draft, because it wasn’t meant to be a political manifesto. But I also didn’t want to send you some empty co-existence message that would make me feel better but leave you feeling pretty much the same as before.

I’m getting off track again. Anyway, I just wanted to show some solidarity with you, and felt the idea of writing a letter with actual pen and paper was sort of magical in this age of the indifferent Internet. Besides, I figured that after your mailbox was recently the receptacle for a toxic missive, it’d be nice to have some good karma coming out of it.

Anyway. The point is, I really don’t know where things are going in this country, or if we can count on us humans to do some good. But I can tell you that about two years ago I decided that I might as well die trying — so to speak. Just to do everything possible to make a difference, to make things better.

I hope that one day we’ll all live here as equals, in one political entity. That we’ll all know Arabic and Hebrew, and that we’ll recognize all the historical narratives and that we’ll learn a lesson about racism and hatred from them. And the refugees will return to their homes, and we’ll be able to live with an authentic, holistic identity that is not based on repression and lies.

Until then — I send you a hug that lasts 30 seconds (that’s supposed to be a really good way to transmit positive energy). And I hope, I really hope that your neighbors will bring you muffins, and will come to apologize, and get to know you for who you are. And that if they hate you it’ll be because you didn’t clean the stairwell after your garbage bags leaked or something like that! 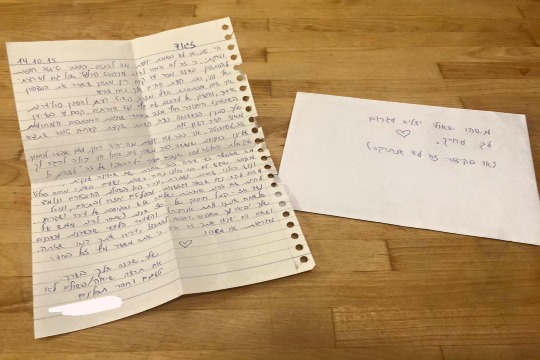 Letter to Zizo, from his neighbor Shelly (courtesy of Zizo Abul Hawa)

And this mini drama is going on while the mainstream news cycle is all about people getting stabbed on the streets of Israel in one bloody internecine attack after another. These are the complexities of life in Israel, the place that Netanyahu relentlessly emphasizes is a “Jewish” state. He and his followers might be insisting a bit too much on ethnic particularism, given the reality of a de facto multi-cultural entity — albeit one that has not quite settled on its identity. After all, there are gay Arab Palestinian men getting married to Jewish men in the Jewish state that has no civil straight or same-sex marriage —  and living openly in Tel Aviv. And they are Israeli.