Israel may soon have to say goodbye to its tight-knit cooperation with the Palestinian Authority and the relative calm that comes with it.

The discovery of the bodies of three Israeli teens who have been missing for the last 18 days, along with the public calls for vengeance heard in Israel today, could mark the beginning of a new era in the West Bank – one that is considerably less stable. This might not be a third intifada but it is also not the relative calm or the close military coordination Israel enjoyed over the last five to six years.

While the public rage in Israel is understandable, it could turn into hate crimes and other violent attacks on Palestinians. There have been initial reports on such incidents already, although luckily they have not resulted in fatalities.

I believe that the Israeli government has no interest in a violent escalation right now. Netanyahu’s nationalistic rhetoric was always at odds with his relative restraint when it came to the use of military power; his record on this issue is much better than any of his predecessors. Most chances are that Bibi will take some very public measures while keeping things under control. His real goal will be to score points on the diplomatic front, especially against the new Palestinian unity deal. The legitimacy of Hamas participation in the PA and PLO has already suffered from the kidnapping, and the fatal blow might come if Israel is able to present significant evidence that links Hamas decision makers to the murder.

Surely, events might spin out of control (a Palestinian teenager was killed by IDF forces in Jenin last night) but even if the Israeli government does not initiate large-scale military action, the proximity of the kidnapping to other major developments – the collapse of the diplomatic process, the growing pressure on Hamas in Gaza and the attempt to form a Palestinian unity government – may bring about a new era in the West Bank. 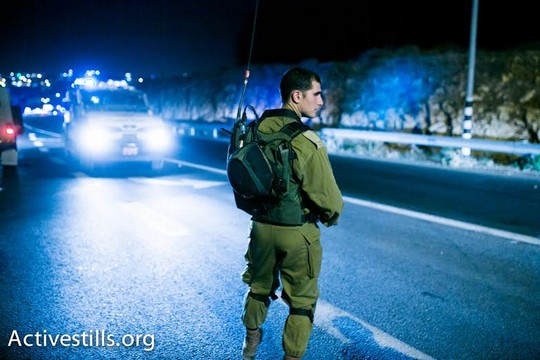 An Israeli army officer standing near the site where the bodies of three missing teens were located, June 30 2014 (photo: Activestills)

In previous years, Israel enjoyed unprecedented calm in the West Bank, largely due to tight military coordination with the Palestinian Authority. The PA’s main policy objective was preventing attacks on Israelis. This coordination reached its peak in 2012, a year in which not a single Israeli was killed in the West Bank. This was the era of the “cheap occupation” – when the PA was financed by the United States and the European Union, and Israel benefited from its work.

One Palestinian I spoke to called it “room service occupation,” meaning that “Israel could pick up the phone and the PA would hand it a wanted man on a plate.” Under such circumstances, the Israeli right was able to market the West Bank to the public as the local Tuscany, and consider the comfortable status quo to be a legitimate, long-term solution.

Yet what justified the existence of the Palestinian Authority – let alone its policies – was a promised endgame in the form of a Palestinian state. Now that it is clear a state is not around the corner — and may never be established at all. The unity deal and caretaker government was an alternative achievement by Mahmoud Abbas that was meant to prepare the ground for a renewed diplomatic effort. However, this government’s fate is also unclear.

If Palestinian politics have no goal, no unity, no elections and certainly no state, then the rationale behind supporting security coordination with Israel also collapses. I do not believe that the PA will cease coordination on its own – and certainly not as the result of an order from above – but I do think it will become less and less effective. Perhaps this is happening already: settlers have been claiming for some time that there is a considerable rise in stone throwing and even Molotov cocktail attacks on Israeli cars, and just recently security officials claimed that there have been numerous abduction attempts and other attacks that were thwarted.

Many have speculated in recent months on the possibility of a third intifada breaking out should American-led negotiations fail. I don’t think such a scenario is very likely. The Palestinians are still traumatized by their losses during the Second Intifada, between 2001 and 2004. It could be that the kidnapping suggests a different, more likely scenario: a dramatic spike in the number of isolated incidents, from abductions to attacks on Israeli cars.

The Israeli government is likely to respond the only way it knows: with force. The Right will try to convince the population that a harsh response is the only solution to terror. Blowing up houses and settling new hills – the settlers are already demanding both – will increase the pressure on the PA. The Israeli government would be forced to take on more responsibility, and the days of the cheap occupation will be over.