Will Israeli masses return to the streets for social justice?

After nearly a month of weekly protests outside the house of Yair Lapid, the new finance minister – numbering about 400 people each and organized by post-#J14 groups for public housing – a much bigger demonstration is planned for Saturday night with more than 10,000 people declaring they will attend on the Facebook event page.

The protests are erupting as Lapid promotes a new budget, which looks much like the one planned by the previous government. It was ultimately public pressure that led the government to scrap the budget and call for elections, in which Lapid got massive support on the ticket of “defender of the middle class.” Lapid supporters feel betrayed by the former TV presenter and columnist, who is about to raise taxes and cut subsidies and government spending instead of tackling the banks, massive corporations and large-scale capitalists. On Saturday they are likely to join opposition forces out on the streets. 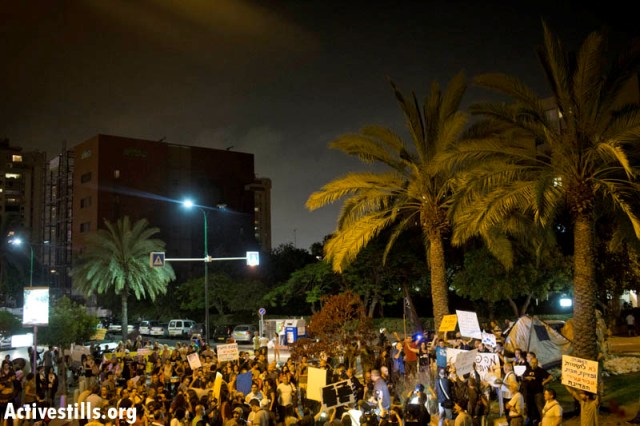 The revival of larger public protests for social justice is accompanied by the same old questions that hung over #J14 in the summer of 2011. While the official event is targeting not only capital but the settlements in the West Bank, and while leftist parties are preparing to make their presence felt on the streets, some are once again calling for the protests to be “a-political” (that is: not to mention the occupation) so as to “allow a wider base of support.” Tensions might also arise between the old and somewhat centrist leadership of the movement and other leaders from the social periphery, who have been constantly active since July 2011. It remains to be seen how these differences will be played out this time around and whether the protests could be hijacked by militarism once again. Saturday night might be a serious test for all these questions, as well as for the movement’s ability to get the masses back out on the streets.