On Tuesday morning the Air Force shot down a Syrian fighter jet for no good reason on earth.

For the first time in 30 years, a Syrian fighter jet on Tuesday morning strayed over the border with Israel – or rather, over the border with the Israeli-occupied Golan Heights, which rightfully belongs to Syria. Israeli military officials reportedly think it was an accident. They also think the Syrian jet was on its way to bomb Al-Nusra jihadists on the Syrian side of the border.

The incursion of the Syrian plane lasted two seconds. It got about 800 meters onto the Israeli-occupied side of the border. Then the pilots turned the jet back toward Syria.

So what did Israel do then? What else? It blew the Syrian jet out of the sky. The crippled plane landed on the Syrian side of the border. Thankfully, the Syrian pilots ejected safely.

All the details of the incident point to an Israeli act of incredible recklessness and stupidity.

Yedioth Ahronoth reports that “the IDF thinks the jet crossed into Israel by accident en route to attacking rebel positions on the Golan.” Same story: “According to a military source, the jet entered Israel for a couple of seconds, penetrating a few hundred meters before turning back (bold italics added), at which point it was hit by the Patriot missile.” 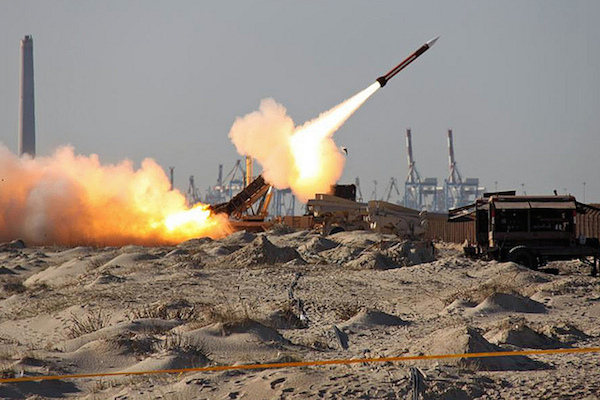 A Patriot missile is launched during a test. (File photo by IAF)

But then a few paragraphs later, an IDF officer tells Yedioth: “We identified the Syrian jet at a height of 10-14,000 feet. That’s a height considered comfortable for an attack run. A fighter jet can reach the Sea of Galilee in less than a minute and everywhere else in five.”

Yeah. The Syrian jet is looking to bomb Al-Nusra jihadists on the Syrian side of the border, it strays accidentally onto the Israeli-controlled side for two goddamn seconds, then it turns back toward Syria – and it was a threat to Israel.

The Haaretz story presents the IDF version of the incident a lot more simply: “Although Israel did not see any threat of attack on its own territory from that plane, its policy stipulates that any plane that breaches its territorial authority must be downed to avoid security risk.”

What security risk? That the jet was going to spy on Israel? Israel has been sending spy jets over Lebanon a few times a week for many years – is it okay, from Israel’s point of view, for Lebanon to shoot down those planes? Israel has just given Hezbollah a great precedent for doing so.

From Times of Israel:

Defense Minister Moshe Ya’alon said Tuesday in response to the incident that the Syrian plane approached Israeli territory in a “threatening manner” and crossed the border.

“We’ve clarified this in the past and we’re emphasizing it again now: We won’t allow anybody, whether it’s a state or a terrorist organization, to threaten our security and violate our sovereignty,” the defense minister and former IDF chief of staff said. “We will respond forcefully to all attempts of this kind, whether it’s an accident or intentional.”

Ever since the war in Gaza ended, people here have been saying another war is coming on the northern border. And what I’ve been dreading is that Israel, given this expectation, will interpret every little move on the other side of the border as proof of intent to attack, and “preempt” it by attacking first.

And that’s what happened today. Will this incident start a war with Syria? Most likely not. But eventually I believe Israel will set off a war with Hezbollah or Syria or Iran or somebody, because its limitless fear produces limitless aggression. No one likes to live in fear, and the best way to lose that fear is to strike first. That, in a nutshell, is Israel’s military policy, reiterated this morning over the Syrian border.