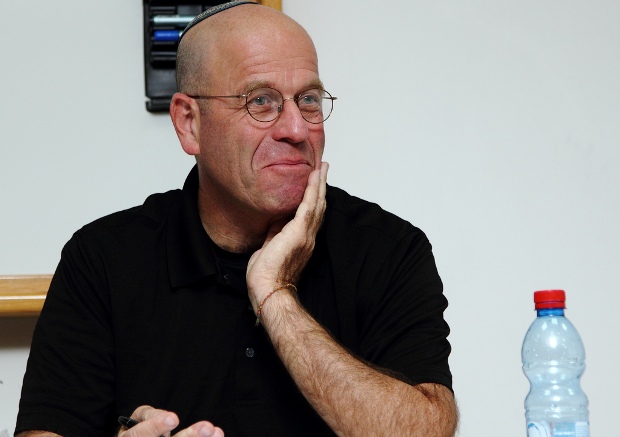 Former Knesset Speaker Abrum Burg has an op-ed in Haaretz in which he not only endorses the one-state solution, but calls the entire left to do the same. Burg has flirted with the idea in the past, but he was never so explicit:

So enough of the illusions. There are no longer two states between the Jordan River and the sea… we [the left] must consider how we can enter into the new Israeli discourse. It has intriguing potential. The next diplomatic formula that will replace the “two states for two peoples” will be a civilian formula. All the people between the Jordan and the sea have the same right to equality, justice and freedom. In other words, there is a very reasonable chance that there will be only one state between the Jordan and the sea – neither ours nor theirs but a mutual one. It is likely to be a country with nationalist, racist and religious discrimination and one that is patently not democratic, like the one that exists today. But it could be something entirely different. An entity with a common basis for at least three players: an ideological right that is prepared to examine its feasibility; a left, part of which is starting to free itself of the illusions of “Jewish and democratic”; and a not inconsiderable part of the Palestinian intelligentsia.

The conceptual framework will be agreed upon – a democratic state that belongs to all of its citizens. The practicable substance could be fertile ground for arguments and creativity. This is an opportunity worth taking, despite our grand experience of missing every opportunity and accusing everyone else except ourselves.

The rest of the article is interesting as well; Burg writes against the habit of Jewish leftists to argue on behalf of the state and even the government abroad, thus helping the right carry out its policies undisturbed: “Let the right-wing MKs, the Katzes and the Elkins, travel around the world and show the beauty of their faces without the deceptive layer of makeup we  provided.”

A year ago, asked by +972 whether it’s time to move from a two-state vision to a one-state model, Burg said:

In Israel, there is a real fear of confrontation with the armed messianic forces living among us. Anyway our government policies are drawn from the power of the settler vision. It seems that the only way to balance this is an alternative suggestion of one state between the Jordan and the sea.  Secular, democratic, egalitarian and civilian.

It looks like recent developments and the expansionist policies of the current government have convinced Burg that it’s time to join the growing one state camp.

It’s interesting to note that the current Knesset Speaker, Reuven Rivlin (Likud), a rightwing hawk, also prefers a single state to two, arguing that “this land is not divisible.” Rivlin doesn’t support the “one person, one vote” model Burg is referring to, but mulls over what seems like a multi-national entity, possibly with two parliaments.

This is from an interview I did with Rivlin a year and a half ago:

“There is a conflict in the Middle East between two entities, and they’re both right, each in their own way. This is our only home, and therefore all kinds of solutions can be found. One could establish a system in one state in which Judea and Samaria are jointly held. The Jews would vote for a Jewish parliament and the Palestinians for an Arab parliament, and we would create a system in which life is shared. But these are things that will take time. Anyone who thinks that there are shortcuts is talking nonsense. As long as Islamic fundamentalism thinks that Jews are forbidden to settle in the Holy Land, we have a problem. It will not be resolved by an agreement, even if we obtain a promise from all the Arab states that it will be fine.

“So if people say to me: Decide − one state or division of the Land of Israel, I say that division is the bigger danger.

Who’s next in line?