Raz Atias was shot by police after holding a gun to his pregnant girlfriend’s head. Relatives of the girl are now blaming Efrat, an anti-abortion group, for ‘brainwashing teens.’ 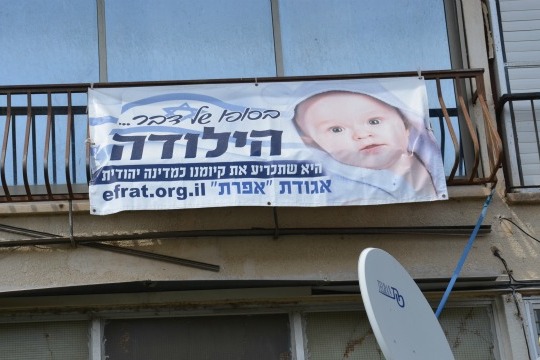 A banner by the anti-abortion group Efrat reads: “At the end of the day, the birthrate is what will determine our existence as a Jewish state.” (photo: Ami Kaufman)

The Hebrew news cycle was dominated last weekend by the death of Raz Atias following a shootout with police. Atias, an 18-year-old navy cadet from Haifa, threatened to hurt his pregnant girlfriend and then commit suicide.

On Thursday evening, Atias  made it known that he and his girlfriend were about to take their life together. Police forces found the couple at the Beit Shemesh forest. Atias held a gun to the girl’s head, and then reportedly opened fire at the cops. He was shot several times and died at the scene. The girl was not hurt.

Initially, reports in the Hebrew media claimed that Atias’ partents had tried to prevent the relationship between the two. However, the story took a surprising twist on Sunday, when the girl’s sister published a public letter accusing Efrat, Israel’s most well-known anti-abortion organization, of “brainwashing… girls, without letting their parents know.”

“We have very serious charges against Efrat,” said the sister, who stated that Efrat’s representatives had convinced Atias’ girlfriend to not have an abortion. Two of the leading organizations for the advancement of women, Na’amat and WIZO (Women’s International Zionist Organization), issued a public statement calling on authorities to look into the activities of Efrat.

Efrat’s chairman, Dr. Eli Schussheim, denied the accusations. In an interview with the right-wing website Israel National News, Dr. Schussheim said that the organization is only interested in “the well-being, health, and happiness of the woman.” He added that Efrat doesn’t pressure women, but only provides information.

However, evidence suggests otherwise. In an investigative TV piece on the organization done by the independent news group Hayarkon 70, an Efrat representative can be heard advising a 17-year-old pregnant girl not to let her parents know of her pregnancy, and not to consult with a doctor.

You have lots of time… if you continue the pregnancy, keep it to yourself. They [your parents] won’t see it on you even for another 4-5 months… it will just cause them tension, and they will start pressuring you to ‘do this, do that.’

I suggest you don’t take tests.

Girl: In a hospital? Through a doctor?

Yes. After all, the baby is developing anyhow… your grandmother didn’t do tests, tests don’t determine if the pregnancy goes well or not.

The report states that Efrat’s representatives tell women that “high numbers” of women who had an abortion suffer from emotional and physical complications.

The debate regarding abortion was never a part of the Israeli political discourse in the past. Efrat has launched several high-profile media campaigns in order to encourage women to turn to them before going through the procedure. An effort to ban Efrat’s commercials from public radio – which is not allowed to air “politically controversial” spots – failed, and the campaign continued. It will be interesting to see whether the latest tragedy will change the rather hospitable responses Efrat has enjoyed so far.